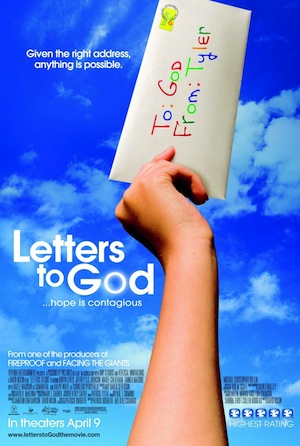 (Possibility Pictures, 2010)
Main Point of Discussion: It’s an amazing thing to point others to God—especially when “others” are your enemies.

The Movie Clip: “God is truth. And it’s your job, Tyler, to point them toward him. And if they turn to him, they find the truth. Wouldn’t that be a wonderful victory?”

Letters to God is a movie about an eight-year-old boy’s pain and unexpected triumphs in the face of brain cancer. One of the ways Tyler Doherty deals with his affliction is writing daily letters to God and mailing them. (The letters become an inspiration to a postal worker who’s going through his own struggles.) Tyler is also surrounded by a loving family and community, which includes his spunky friend, Samantha, and her cantankerous-but-wise grandfather, Cornelius Perryfield.

The clip we’re using for this particular discussion features Mr. Perryfield doing his best to cheer up Tyler, who’s been down about feeling sick—as well being teased and mistreated by one particular peer. Tyler’s sitting on a couch with Samantha (who’s donned a head scarf in solidarity with Tyler) when Mr. Perryfield waltzes into the room, disguised as his whimsical alter ego, and gets the kids to laugh. He then declares Tyler “God’s warrior” and proceeds to reveal some important truths to the cancer-stricken child.

Introducing the Clip:
Today I want to show you a clip from the movie, Letters to God. It’s about an eight-year-old boy struggling with brain cancer. One of the ways Tyler Doherty deals with his illness is writing daily letters to God and mailing them. (The letters become an inspiration to a postal worker who’s going through his own struggles.) Tyler is also surrounded by a loving family and community, which includes his spunky friend, Samantha, and her grandfather, Cornelius Perryfield. The clip we’re using features Mr. Perryfield doing his best to cheer up Tyler, who’s been down about feeling sick and being teased and mistreated by a mean kid. Tyler’s sitting on a couch with Samantha (who’s wearing a head scarf like Tyler so he doesn’t feel different) when Mr. Perryfield waltzes into the room, disguised as his foreign alter ego, and gets the kids to laugh. He then declares Tyler “God’s warrior” and reveals some important truths to him. Let’s take a look at this scene:

Note: You’ll need to rent the movie Letters To God at your local video rental store and cue it up to the following scene.

Transitional Statement:
In this scene Mr. Perryfield turns Tyler’s illness around—at least the part of it Tyler can control. In other words, Tyler doesn’t have the power to make his cancer go away, but he does have the power to react to it (and to others around him) in a God-honoring way. In fact, as Mr. Perryfield states, Tyler can choose to use his illness to point others to God—even those who are mean to him.

2 Timothy 2:24-26 (NIV)
And the Lord’s servant must not quarrel; instead, he must be kind to everyone, able to teach, not resentful. Those who oppose him he must gently instruct, in the hope that God will grant them repentance leading them to a knowledge of the truth, and that they will come to their senses and escape from the trap of the devil, who has taken them captive to do his will.


Wrap Up:
Tonight we’ve been looking at the biblical command to treat those who oppose us because of our faith with love and gentleness and patience. Not an easy task! It’s natural to want to lash out at those who hurt our feelings or tease us or mistreat us. But God has a crazy plan—and it’s not about defeating your enemies. Instead, when you love them even when they mistreat you, it leaves the door open for them to wonder WHY you’re loving them…and when they realize it’s because of how much God loves you, that’s going to get them thinking, big time. It may even lead them to want that kind of love in their own lives—and eventually toward repentance and the knowledge of the truth. Isn’t that incredible? And all because you were humble enough to swallow your pride and love those who didn’t love you.

But like we said—not an easy task. If that’s how you’re feeling today, don’t sweat it. You’re reluctance to love your enemies is a very common, natural feeling. But as you know, God isn’t common or natural—God is altogether uncommon and unnatural. That’s why Jesus’ commands are so radical—they go against so many of our interior motives and drives. But that’s why he’s living inside us—to help us do battle against our old natures every day and become the radical servant that he was (and still is).

So as we get ready to bow our heads and pray, I want you to acknowledge to God exactly how you feel at this moment—warts and all. Don’t be bashful…God already knows how you feel. He won’t be surprised. Then, if you’re feeling anger toward your enemies, ask God to change your heart and help you carry out his commands as outlined in this passage. And believe it: God wants this to happen because it will mean that more people will come to him. And like Tyler in the video clip, you, too, can be one of God’s warriors, leading others to Christ simply by demonstrating humility, grace, love, and gentleness.