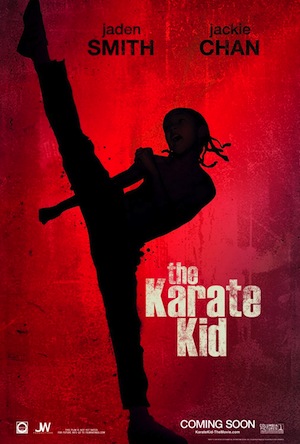 (Columbia Pictures, 2010)
Main Point of Discussion: The Spirit of God lives all around us as well as inside us—and we must recognize its omnipresence and let it empower every single aspect of our lives.

The Movie Clip: The Karate Kid stars Jaden Smith (Will Smith’s son who debuted in his dad’s The Pursuit of Happyness a few years ago) as Dre Parker and Jackie Chan as Mr. Han. It’s a remake of the classic ’80s flick starring Ralph Macchio and Pat Morita. In the 2010 edition, Dre’s mother moves to China for work and brings Dre with her. After the move, Dre runs into bullies, learns Kung Fu from Mr. Han, and a lot about life.

Introducing the Clip:
Today I want to show you a clip from the movie The Karate Kid. Some of you have seen this movie already, and some of you have seen the original ’80s version…probably on a lazy Sunday afternoon while channel surfing. This new film is about an American boy named Dre who moves to China with his single mother, runs into bullies, and learns Kung Fu—and a lot about life—from Mr. Han. In the scene we’re about to watch, Dre is bored out of his mind…practicing throwing his jacket on a wooden hook, putting it on, taking it off, throwing it to the ground, and picking it up again—over and over and over. Dre has had enough of the monotony and tells his teacher, Mr. Han, in no uncertain terms. Let’s take a look at the scene.

BEGIN CLIP AT 1 hour 10 minutes and 10 seconds (early in Chapter 15), just after Dre walks into Mr. Han’s workspace and resumes his boring jacket “drills.” Or this clip is available to download and purchase from WingClips (as seen in the embedded video clip above).

Dre: Mr. Han, I told you! I get it, okay? “Be respectful”; I got it! I put my jacket on a thousand times; I took it off a thousand times, okay? This is stupid! I’m done! They can beat me up if they want to…And you wanna know why you only have one student? Cuz you don’t know Kung Fu! (walks away)

Mr. Han: (stands up) Come here (points to the ground; Dre walks back to him). Jacket on! (Dre looks tired but reluctantly does as instructed, and Mr. Han swats the jacket away) Jacket on!

(From this point, Mr. Han demonstrates to Dre that his repetitive—and seemingly meaningless—practice with his jacket has been mimicking Kung Fu techniques all along. The two proceed to spar at various intensities with limited dialogue, Dre mostly shocked at his instinctive and skillful bodily reactions to the martial arts master. After about a minute and half of sparring, Mr. Han stops and tells Dre the secret…)

Transitional Statement:
In this scene Dre discovers that he can harness the power of Kung Fu and do physical feats he never imagined he was capable of performing. But deeper still, Dre’s eyes are opened to the idea that Kung Fu is a force, of sorts—one that his teacher, Mr. Han, tells him “lives in everything we do.” Sound familiar?

Ephesians 1:18-20 (NIV)
18 I pray that the eyes of your heart may be enlightened in order that you may know the hope to which he has called you, the riches of his glorious inheritance in his holy people, 19 and his incomparably great power for us who believe. That power is the same as the mighty strength 20 he exerted when he raised Christ from the dead and seated him at his right hand in the heavenly realms.


Wrap Up:
Tonight we’ve been looking at God’s power in us and around us. True, Jackie Chan has Kung Fu in his life, and it sure can be a powerful “force”…but believers in Jesus have a force much more powerful at our disposal. What’s similar about students of Kung Fu and students of Christianity is that neither group always harnesses the power given to them. In Kung Fu, this is understandable—it’s a human endeavor that has earthly limits. But the power of God is infinite! And it’s all around us—even in us. So…what’s our excuse?

Whatever is holding us back from completely experiencing God’s power in our lives, the first step back toward God’s program is obedience…and then surrender. Whether we fully and perfectly believe at all times isn’t as important as making up our minds to do what God tells us to do—because after that obedience, even if our belief is lacking, we give God room to act in our lives…and fill us with the hope and riches and power that the Ephesians passage tells us about. Then, like Dre in the film clip, we must surrender and let God’s power come down upon us and teach us, step by step, how to best live for him.

Let me challenge you this week to pick an area of your life where you’d like to see God’s power working, and then pray that God will give you power as you partner with him. Then note the outcome and share it with the group next week.