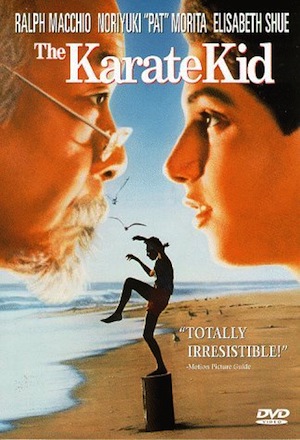 (Columbia Pictures, 1984)
Main Point: We should obey God even when we don’t understand Him because He has always been trustworthy and faithful…and He always will be.

The Movie:
The Karate Kid (1984) was a great 80s film about a young man from New York named Daniel who relocated to sunny California…but ran into trouble when he got there. Fortunately, Daniel met Mr. Miyagi, an Asian handyman who worked at his apartment complex who happened to know karate…and lots of it. He takes Daniel under his wing, trains him to be a courageous fighter, and mentors him as a son. Daniel doesn’t always understand Mr. Miyagi’s ways, and one of those misunderstandings is the focus of this small group discussion.

The movie is rated PG for language and fight sequences. If you use the WingClips video linked below, the couple of swear words from this clip are muted. If you use the actual DVD, you’ll have to endure a couple of bad words.

Introducing the Clip:
In the 1980s, every guy wanted to be as cool as Ralph Macchio, and every girl wanted to date him. He was most famous for his role as Daniel Larusso in The Karate Kid series. I want to show you a clip from The Karate Kid in which “Daniel-san” gets upset with his mentor and teacher, Mr. Miyagi. For the past few weeks, Mr. Miyagi had been promising to teach Daniel-san karate, but instead, the older man just had the boy waxing his cars, painting his fence, and sanding his floors. Daniel feels cheated, of course, and confronts his teacher, Mr. Miyagi. Take a look at what happens next.

The Movie Clip:
The clip is available for free at www.WingClips.com. Just click on the link below to play the video:
http://www.wingclips.com/movie-clips/the-karate-kid-1984/purpose-of-training?play=1

Transitional Statement:
Daniel was getting upset with Mr. Miyagi because he didn’t understand what his teacher was doing. Little did Daniel-san know that Mr. Miyagi was training him all along! Those countless hours waxing cars, painting fences, sanding floors, and painting the house were actually practice sessions in karate lessons! At the start of the clip, Daniel doubted whether or not Mr. Miyagi was being honest with him…or just taking advantage of him. But by the end of the clip, Daniel-san had a deep respect for his teacher because he finally understood what the master was up to. The same can be true of our relationship with God. Sometimes we don’t understand all that he puts us through. We think He is wasting our time, or taking advantage of us. But the truth is, He loves us and is always working in and through us for our good. Therefore, we should obey God even when we don’t understand Him because He has always been trustworthy and faithful…and He always will be.

Praise the LORD. I will extol the LORD with all my heart in the council of the upright and in the assembly. 2 Great are the works of the LORD; they are pondered by all who delight in them. 3 Glorious and majestic are his deeds, and his righteousness endures forever. 4 He has caused his wonders to be remembered; the LORD is gracious and compassionate. 5 He provides food for those who fear him; he remembers his covenant forever. 6 He has shown his people the power of his works, giving them the lands of other nations. 7 The works of his hands are faithful and just; all his precepts are trustworthy. 8 They are steadfast for ever and ever, done in faithfulness and uprightness. 9 He provided redemption for his people; he ordained his covenant forever– holy and awesome is his name. 10 The fear of the LORD is the beginning of wisdom; all who follow his precepts have good understanding. To him belongs eternal praise.


Wrap Up:
Wax on. Wax off. It’s a saying we all know even if we weren’t born in the 80s. That’s because we all know the universal lesson Mr. Miyagi was trying to teach his karate student, Daniel-san. Wax on, wax off had nothing to do with automotive care; it had everything to do with training for karate.

Even when Daniel-san thought that Mr. Miyagi was taking advantage of him and wasting his time, the master was actually training his student. Scripture shows that this is often the case with us and our faith, too.

He will be faithful to you, as well. He will continue to be good to you, too. He loves you and His love is perfect. That should give us the confidence we need to follow Him, trust Him, and obey Him even when we don’t understand.

I think it’s OK to ask God for what I call a “Mr. Miyagi moment.” You know, that moment where we ask, “God, what’s really going on here? Can you explain what this is all about? Can you give me a little bit more of the answer I seek?” Bear in mind, God doesn’t have to give you an answer, and in fact, He may not. But I believe that He will speak to you if you ask Him to.

So, let’s take a moment to pray and ask God to show us what He’s up to. Who knows, He may lay out His plan for you as clearly as Mr. Miyagi did for Daniel-san. Of course, He might also tell you to just keep on trusting and obeying.

(Leaders: Give students time to pray. Have your adult leaders filtering through the crowd to help in any way possible. After everyone is done praying, give a final invitation for more help.)

One last thing before we dismiss. If you want to talk about what you’re facing or what you’re up against or what you’re going through, we’d be happy to talk with you some more. Just grab me or one of our adult leaders and share with them your need. We’ll do all we can to help you keep trusting and obeying God.