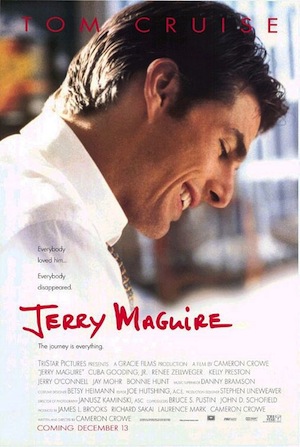 Main Point: We must follow Christ, even when we're the only ones.

This is a fantastic movie with Tom Cruise about Jerry Maguire, a sports agent (Cruise), who in the beginning of the movie discovers the immorality in his job. He ends up losing his job and tries to survive as an honest agent with the help of a very loyal colleague. Unfortunately, there are two sexual situations (one of which has some nudity), which ruins the idea of watching the movie with the family. But skipping over those two parts, this movie is an amazing story about honesty, relationships, and being real. If I had teenage children, I'd allow them to watch the movie with me, as long as I knew when and where to skip the bad parts.

Clip: Who's coming with me?
This clip begins with Jerry Maguire leaving his office just after being fired. He has a new change of heart and wants to be completely ethical in his business, and is now pleading for any other ethical person to leave the company and come work with him. At the end of the scene, just when it looks as if no one will go with Jerry, Dorothy from accounting stands up and says “I will go with you.” While all eyes are on her, and everyone else stays, Dorothy leaves her well-paid job behind. The scene begins at 29:25 on the DVD (the beginning of chapter 13) or if you begin the counter on the VCR at the FBI warning, and ends at 33:03, right after Jerry and Dorothy exit the building.

Clip Introduction:
We're going to watch a scene from Jerry Maguire. In this movie, Tom Cruise is a great sports agent who has made his way to the top by lying and manipulating athletes. But now he wants to do what is right and be honest, and he has lost his job for it. This is the scene where Jerry Maguire is leaving the office, asking anyone to stand alongside him in following what's right. Anyone who goes with Jerry will be doing the right thing, but will lose their job and even their friends from work. Let's see what happens.

Scene Script:
(JERRY exits his office into main work area. Employees begin to pause and watch what he will do.)

JERRY: Well, don't worry. I'm not going to do what you all think I'm going to do, which is flip out! Let me just say as I ease out of the office I helped build. I'm sorry, but it's a fact that there's such a thing as manners–a way of treating people. These fish have manners. These fish have manners. In fact, I'm starting a company and the fish will come with me. You can call me sentimental; the fish are coming with me.

(He walks to the fish tank and captures one in a Ziploc bag.)

WENDY: Oh, Jer, you know, I'm three months away from the pay increase.

DOROTHY: (Stands up.) I will go with you.

(JERRY nods. DOROTHY gathers her things and they join each other in the middle of the room.)

JERRY: (holding up fish) We'll see you all again. Sleep tight. (They exit.)Transitional Statement:
In the scene, Dorothy decided that it was better to do what's right, even when she knows it will cost her a job and even her friends. This is no easy decision. Sometimes it feels like doing what is right can feel like we're standing out in a crowd. Right now we're going to split up into our small groups and discuss the idea of doing what's right and even what the cost sometimes is.

Mark 10:28-30
Peter said to him, “We have left everything to follow you!”
“I tell you the truth,” Jesus replied, “no one who has left home or brothers or sisters or mother or father or children or fields for me and the gospel will fail to receive a hundred times as much in this present age (homes, brothers, sisters, mothers, children and fields–and with them, persecutions) and in the age to come, eternal life.”

Wrap-Up:
Dorothy saw that there was a decision to be made: She could either do what's right and leave behind a nice paycheck and some good friends from work, or she could choose to not embarrass herself and remain comfortable but working for a dishonest company. None of us in here would argue that it took guts and a lot of courage for her to stand up and leave it all behind. It's difficult when people are watching. Some of us might get teased or laughed at if we stand out in the crowd for doing something that’s right. It's not an easy thing. But Christ has told us that we should be willing to follow Him no matter what. In fact, He says even if it means hurting a relationship with a family member. Christ calls us to be obedient at all times, no matter what the crowd is doing or who is watching. Before we go tonight, let's get in groups of three, tell about what we're going to do differently this week to obey Christ, and then pray for each other.