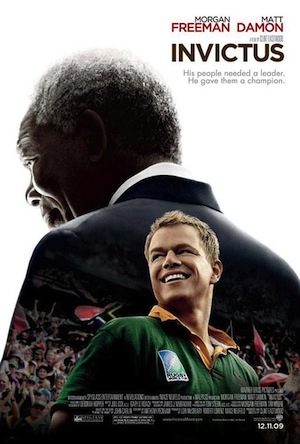 (Warner Brothers Pictures, 2009)
Main Point of Discussion: Through Christ we can make peace with our enemies.

The Movie Clip: Invictus is a powerful movie with many clips that provoke discussion. It features Morgan Freeman as Nelson Mandela, the black South African leader and activist who was released from prison in 1990 after serving 27 years and, in 1994, elected president. The film focuses on Mandela just after he takes office and his friendship with the white captain of South Africa’s rugby team whose 1995 World Cup win helps bring the racially divided nation together.

Incidentally, the word invictus is Latin for “unconquered.” It’s also the title of a Victorian-era poem that inspired Mandela while he was imprisoned. The poem is referenced in the movie several times and is a bridge between Mandela and the rugby captain, François Pienaar (played by Matt Damon), leading up to the team’s triumph.

The clip we’re using for this discussion is from the beginning of the movie, just after Mandela assumes presidential duties. Lead bodyguard, Jason Tshabalala, is organizing security for Mandela and has requested additional bodyguards. It’s important to note that the skin color of Mandela’s inner-circle has been decidedly black to this point—but that’s about to change. Tshabalala (understandably) doesn’t like it. Mandela, however, challenges his distrust.

Introducing the Clip:
Today I want to show you a clip from the movie Invictus. Some of you may have seen this movie already, but for those who haven’t, it features Morgan Freeman as Nelson Mandela, the black South African leader and anti-Apartheid activist who was released from prison in 1990 after serving 27 years and later elected president. The film focuses on Mandela just after he takes office and his friendship with the white captain of South Africa’s rugby team, whose 1995 World Cup win helps bring the racially divided nation together.

The clip we’re about to watch is from the beginning of the movie, just after Mandela assumes presidential duties. Mandela’s lead bodyguard is organizing security and has requested help. It’s important to keep in mind that the skin color of Mandela’s inner-circle has been noticeably black to this point—but that’s about to change, and Mandela’s bodyguard doesn’t like it. Mandela, however, challenges his distrust. Let’s take a look at this scene.

BEGIN CLIP AT 12:53 (chapter 4) just after bodyguard walks from assistant’s desk into his own office.

Bodyguard #1: Did you talk to Brenda about it?

Jason Tshabalala: Yes, yesterday. (hears door knock) Ah, that must be Jessie with the schedule. Come in, beautiful! (taken aback by four official-looking white men walking through door) What’s this?

Jason Tshabalala: That’s me. Am I under arrest?

Captain Feyder: We’re the Presidential Bodyguard. We’ve been assigned to this office. Here are our orders. (hands Tshabalala a letter)

Captain Feyder: (to Tshabalala) You’ll see that they’ve been signed.

Jason Tshabalala: That’s because there are four Special Branch cops in my office.

Nelson Mandela: Oh, what did you do?

Jason Tshabalala: Nothing. They say they are the Presidential Bodyguards and have orders signed by you. (hands Mandela the letter)

Nelson Mandela: Ah, yes. Ah, yes. These men are special trained by S.A.S. They have lots of experience. They protected de Klerk.

Jason Tshabalala: Yes, Madiba, but that doesn’t mean they have to come into…

Nelson Mandela: You asked for more men, didn’t you?

Jason Tshabalala: Comrade President, not long ago these guys tried to kill us. Maybe even these four guys in my office tried and often succeeded.

Nelson Mandela: Yes, I know. Forgiveness starts here, too. Forgiveness liberates the soul. It removes fear. That is why it is such a powerful weapon. (pauses, puts arm around Tshabalala’s shoulder) Please, Jason…try.

Transitional Statement:
In this scene the bodyguard, Jason, is faced with a hard task: Forgiving and reconciling with and making peace with his enemies. And we’re not talking about personality clashes here or guys who just rub him the wrong way—the four white bodyguards who walk into his office represent an oppressive, racist regime that killed and otherwise harmed countless black South Africans during the years of Apartheid. And now Jason has to forgive them and reconcile with them and make peace with them? Just like that? Well, that’s what Mandela is asking him (and, by extension, other black South Africans) to do.

Ephesians 2:11-16 (NIV)
11Therefore, remember that formerly you who are Gentiles by birth and called “uncircumcised” by those who call themselves “the circumcision” (that done in the body by the hands of men)—12remember that at that time you were separate from Christ, excluded from citizenship in Israel and foreigners to the covenants of the promise, without hope and without God in the world. 13But now in Christ Jesus you who once were far away have been brought near through the blood of Christ.

14For he himself is our peace, who has made the two one and has destroyed the barrier, the dividing wall of hostility, 15by abolishing in his flesh the law with its commandments and regulations. His purpose was to create in himself one new man out of the two, thus making peace, 16and in this one body to reconcile both of them to God through the cross, by which he put to death their hostility.


Wrap Up:
Tonight we’ve been looking at our power to make peace with, reconcile with, and forgive our enemies—specifically because Jesus already did the work in this area and offers his power to us! That’s right—all of Jesus’ power to love our enemies is already ours if we’re followers of Jesus. He just handed it over to us when we invited him into our lives.

But making peace and forgiving and reconciling aren’t always easy, even when Jesus’ power is readily available to us. Why? Because we’re still frail human beings who don’t always do the right things or see the obvious help right in front of us. We need reminders all the time. And making peace with our enemies can also be difficult because maybe the wrongs done to us are deeply painful. In the case of Nelson Mandela and his fellow black South Africans, they were physically, psychologically, and socioeconomically oppressed by a racist white regime for decades—poverty, hopelessness, beatings, murder. That’s a lot to forgive, but Mandela—a professed believer in Christ—demanded it of himself and others.

It’s one thing, however, to know the right thing to do and another to actually carry out that right thing to do. Maybe you’re dealing with an unresolved conflict right now (or maybe it’s been months or years since you last thought about your unresolved conflict). First, don’t beat yourself up about it. Jesus died and rose again so you could be free from the sin of beating yourself up—don’t insult him by keeping that flame lit. Second, pray. Ask God to search your heart and soul for anything unclean or impure in your life, call you on it, and help you get rid of it. Third, search out that person you’re in conflict with—and ask forgiveness for your role in the conflict.
A few cautions: You may not get the response you’re hoping for (i.e., the other person may not acknowledge his or her role in the conflict or ask for your forgiveness). If this happens, there’s not much you can do except pray and let it go. But if you’re relationship with this person is otherwise strong, you might later approach him or her and mention how you feel. The other thing to keep in mind: Perhaps your pain and hurt is too deep and private. In cases where you’ve been abused physically or sexually, make sure you talk to me or one to the other adult leaders before you attempt any peacemaking. We have extra resources that can help you understand what happened to you and get you in the right frame of mind before going forward.

So now, let’s bow our heads so we can think about ourselves and not those around us. As you sit there with your eyes closed and head bowed, I want you to think about the areas where you need to make peace, forgive, and reconcile with someone else. Then I want you to thank God for pointing them out to you, as well as for all the chances God will give you to carry out his commands. And remember that I or one of the other adult leaders can help you identify Scriptures that can strengthen you—and we’ll always be praying for you.