Invention of Lying, The 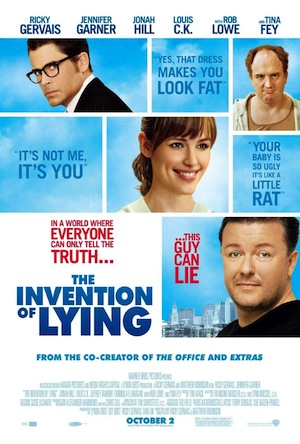 (Warner Brothers, 2009)
Main Point of Discussion: The biggest question in life is “Does God really exist?” so we must answer that question to the best of our ability.

The Video Clip:
The Invention of Lying is about exactly that: It follows the life story of a guy named Mark (Ricky Gervais) who actually invents lying in a world where people only tell the truth.

That’s right, in this make believe world, every single person tells the truth, no matter how blunt or hurtful the truth may be.

While the movie has some funny elements to it, this “romantic comedy” has a fairly clear agenda, and that’s to ridicule people of faith.

It’s rated PG-13 for “language including some sexual material and a drug reference.”

Introducing the Clip:
This movie is full of “lies” so I don’t recommend it at all. But they are lies that we all have to face in the real world. It also shows a lot of peoples’ confusion and questions about God. I’m going to show you this clip so you can understand those misconceptions better and learn to combat them with truth. We need to be able to have rational conversations with others about God’s existence.

Here’s a quick summary of the movie:

Imagine a world where everyone tells the truth…all the time…no matter what. There is no such thing as lying; there isn’t even a word for it! Seriously!

Then, imagine what would happen if one guy figured out a way to lie. Imagine what he could do with that ability. Imagine what power he would have. Would he use it for good or evil?

That’s essentially the plot of a film entitled The Invention of Lying, starring Ricky Gervais.

In the movie, Mark figures out how to lie and he uses it to manipulate others. During one scene in the movie, Mark is talking with his aging and dying mother, and she’s afraid of what’s next. So Mark tells her some fanciful story about a “man in the sky.” Unbeknownst to him, the doctors and nurses overhear his “words of counsel” and pretty soon, the entire world is at Mark’s doorstep wanting to know about this “man in the sky.”

Let’s see how Mark handles the situation he’s gotten himself into.
Show the Video Clip Here.
(Note: You’ll need to rent this video from your local video store and cue it up to the above described scene.)

Transitional Statement:
The phrase “man in the sky” has long been used by atheists to ridicule people who believe in God, as well as to mock belief in what can’t be proven through the scientific method. This movie scene is designed to generalize all those who believe in God as fools who believe just about anyone and anything that help them feel better.

Here’s an important side note about the actor, Ricky Gervais. He openly states that he lost his faith at the age of 8 when his mother didn't allow him to entertain doubts about the existence of God. His only conclusion? He “knew” that God didn’t exist.

It’s easy to see that Gervais’ personal history had a part in shaping this storyline, so let’s jump into our discussion by talking about doubt.

Optional Activity:
If you want to use this portion of the discussion, just say, “Let’s take about 10 minutes to work through some specific questions about God’s existence and the doubts we experience.” (Leaders: Pass out a copy of the discussion questions below and give the students 10 minutes or so to complete them. You can just cut and paste the questions into a Word document. After the students have finished the questions, allow some time for discussion and interaction.)

Leader Say:
Let’s watch a clip that can answer that last question in a very powerful way. This YouTube video is about 10 years old, but it features two incredibly famous guys in the ongoing debate about whether or not God exists.

The European man is Dr. Peter Atkins who does NOT believe in God. He believes science can account for everything that we know, see, and experience. For him, science is the ‘end all, be all.’

The American guy – with the beard – is Dr. William Craig who DOES believe in God. He’s pretty smart. Of course, he acknowledges science’s advancements, and all the wonderful truths it has brought us, but he believes it’s absolutely foolish to NOT believe in something just because science can’t prove it. Here, take a look for yourself.

(Note to Leaders: Be sure to view this clip a few times so that you can explain William Craig’s position. He basically says, “Science CANNOT prove everything, and there are 5 HUGE reasons why. So, if we know that concepts like math and beauty and even science itself cannot be proven by science, is it that big of a deal to believe that there’s a God out there who cannot be proven by science?”)

Psalm 14:1-7 (NLT)
1 Only fools say in their hearts,
“There is no God.”
They are corrupt, and their actions are evil;
not one of them does good!

2 The LORD looks down from heaven
on the entire human race;
he looks to see if anyone is truly wise,
if anyone seeks God.
3 But no, all have turned away;
all have become corrupt.
No one does good,
not a single one!

4 Will those who do evil never learn?
They eat up my people like bread
and wouldn’t think of praying to the LORD.
5 Terror will grip them,
for God is with those who obey him.
6 The wicked frustrate the plans of the oppressed,
but the LORD will protect his people.

7 Who will come from Mount Zion to rescue Israel?
When the LORD restores his people,
Jacob will shout with joy, and Israel will rejoice.


Summary and Wrap Up:
Tonight we watched a movie clip that slams faith in God. We also talked about how many people view God as a silly “man in the sky.” Most of those people think, “If science can’t prove something, that something isn't true. Therefore, since science can’t prove God, God must not exist.”

However, we discovered from Dr. William Craig that there are many reasons outside the realm of science that make the existence of God not only possible, but highly probable! Remember, our calling as Christians is not to argue or “prove” anything; rather it’s our job to
love God and love others, which is the Greatest Commandment.

I want to encourage you with some ancient words. People who believe in God have been ridiculed for thousands of years. One of them was Peter. So he wrote a letter to some of those he loved: “But even if you suffer for doing what is right, God will reward you for it. So don’t worry or be afraid of their threats. Instead, you must worship Christ as Lord of your life. And if someone asks about your Christian hope, always be ready to explain it. But do this in a gentle and respectful way. Keep your conscience clear. Then if people speak against you, they will be ashamed when they see what a good life you live because you belong to Christ.” (1 Peter 3:14-16)

Pass out paper and pens and ask students to write “an open letter to Ricky Gervais” using the material covered during the small group discussion. Tell them that their letters can range from “I’m with you Ricky; God doesn’t exist!” all the way to “Ricky, I have doubts as well, and I promise I will be praying for you.”

Finally, and most importantly, share the gospel and give students a chance to trust in Jesus Christ as their only hope of salvation based on what they just learned.