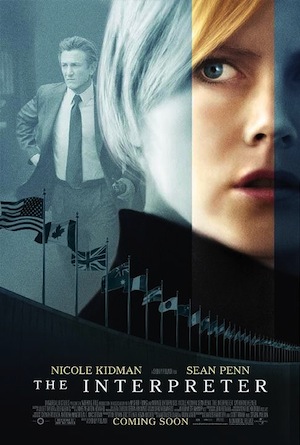 Main Point: Forgiveness frees us from bitterness and revenge

The Movie Clip:
The movie The Interpreter was an incredible movie about revenge and forgiveness. One scene in particular is a great clip to show to provoke discussion about revenge, forgiveness and how to respond to those who hurt us.

Start the DVD at Chapter 7 – 40:10. Or this clip is available to download and purchase from WingClips (as seen in the embedded video clip above).

The scene starts with federal agent Tobin Keller questioning Sylvia Broome as to why she is in pictures that he has recently received (They imply she was personally at a political rally lead by Ajene Xola. He was a leader of an opposing political party to the current Matobo-African ruler – Zuwanie. Keller questions Sylvia’s loyalty and mentions reasons why she might want to hate the current ruler – Zuwanie…her family was killed by one of his landmines. The scene begins with her answering his questions…

Note: The powerful element in this clip is the story that Sylvia tells. If it is difficult logistically to show video clips… you can just tell this story to kick off the discussion.

Sylvia: Shh. We don’t name the dead. Everyone who loses somebody wants revenge on someone, on God if they can’t find anyone else. And in Africa…In Matobo, the Ku believe that the only way to end grief is to save a life. If someone is murdered, a year of mourning ends with a ritual that we call “the drowning man trial.” There’s an all-night party beside a river. At dawn, the killer is put in a boat. He’s taken out on the water and he’s dropped. He’s bound, so that he can’t swim. The family of the dead then has to make a choice. They can let him drown or they can swim out and save him. The Ku believe that if the family lets the killer drown, they’ll have justice but spend the rest of their lives in mourning. But if they save him, if they admit that life isn’t always just, that very act can take away their sorrow. Vengeance is a lazy form of grief.

(Silence. Agent Keller looks away from Sylvia and sits down.)

Sylvia: Why do you look away? There are some things I don’t like to talk about and you call it lying. But not when you do it.

Tobin Keller: I’m not the one under investigation.

Sylvia: (She looks over at the picture.) That was a long time ago.

(Sylvia walks off.)
Stop the scene at chapter 7 – 42:52 on the DVD.Transitional Statement:
“In this scene Sylvia told a powerful story about what the Ku believe. The Ku give people the option of escaping their sorrow, or dwelling in mourning and bitterness for the rest of their life. Some of us might face similar choices in our lives of how we respond to those who hurt us.”

Divide into Small Groups:
“Let’s divide into small groups and talk about this. Then afterward we’ll come back together for a final word.”

Keep the pieces of paper for later…

ASK A FEW: What choices do we have with this list? (live in bitterness and grief… or forgive these things and be free)

Wrap Up:
The story in the movie brought up an interesting point. When others do wrong to us, we can forgive them, or hold on to our hate, turning grief into revenge.

It didn’t bring up good memories when we made out a list of all the wrong things that others have done to us. These things weren’t fun. Some of them aren’t easy to forgive. Yet, many of our own lists- the lists of the things that WE have done wrong to others and to God- these lists were full of items that we would love forgiveness for.

God makes it clear all through the Bible that He will forgive us if we are willing to let go of the things that we are holding onto, and put our trust in him. This is a free gift, but our hands need to be empty to accept it. And tonight some of us might need to let go of some “hate” so that we can accept God’s free gift to us.

James 2:13 says this:
For there will be no mercy for you if you have not been merciful to others. But if you have been merciful, then God's mercy toward you will win out over his judgment against you.

Tonight you can be free from that list of the wrongdoings you have done against God and others. God wants to tear up that list. Let’s pray together right now.


Then Peter came to him and asked, “Lord, how often should I forgive someone who sins against me? Seven times?”
[22] “No!” Jesus replied, “seventy times seven!
[23] “For this reason, the Kingdom of Heaven can be compared to a king who decided to bring his accounts up to date with servants who had borrowed money from him. [24] In the process, one of his debtors was brought in who owed him millions of dollars. [25] He couldn't pay, so the king ordered that he, his wife, his children, and everything he had be sold to pay the debt. [26] But the man fell down before the king and begged him, 'Oh, sir, be patient with me, and I will pay it all.' [27] Then the king was filled with pity for him, and he released him and forgave his debt.
[28] “But when the man left the king, he went to a fellow servant who owed him a few thousand dollars. He grabbed him by the throat and demanded instant payment. [29] His fellow servant fell down before him and begged for a little more time. 'Be patient and I will pay it,' he pleaded. [30] But his creditor wouldn't wait. He had the man arrested and jailed until the debt could be paid in full.
[31] “When some of the other servants saw this, they were very upset. They went to the king and told him what had happened. [32] Then the king called in the man he had forgiven and said, 'You evil servant! I forgave you that tremendous debt because you pleaded with me. [33] Shouldn't you have mercy on your fellow servant, just as I had mercy on you?' [34] Then the angry king sent the man to prison until he had paid every penny.
[35] “That's what my heavenly Father will do to you if you refuse to forgive your brothers and sisters in your heart.”

1 John 3:11-18 (NLT)
This is the message we have heard from the beginning: We should love one another. [12] We must not be like Cain, who belonged to the evil one and killed his brother. And why did he kill him? Because Cain had been doing what was evil, and his brother had been doing what was right. [13] So don't be surprised, dear brothers and sisters, if the world hates you.
[14] If we love our Christian brothers and sisters, it proves that we have passed from death to eternal life. But a person who has no love is still dead. [15] Anyone who hates another Christian is really a murderer at heart. And you know that murderers don't have eternal life within them. [16] We know what real love is because Christ gave up his life for us. And so we also ought to give up our lives for our Christian brothers and sisters. [17] But if anyone has enough money to live well and sees a brother or sister in need and refuses to help—how can God's love be in that person?
[18] Dear children, let us stop just saying we love each other; let us really show it by our actions.
Original Scene Idea by Jasmine
Video Clip Discussion Written by Jonathan McKee