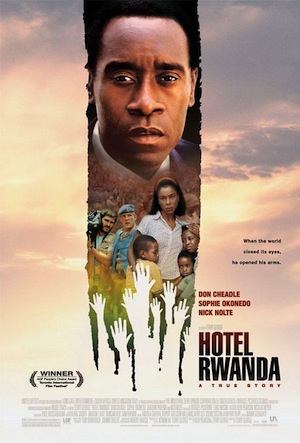 Main Point: Our faith does nothing for us if there is no action behind it.

The Movie Clip: A Massacre on TV
Based on a true story, Hotel Rwanda is a movie about one man doing all that he can to prevent the murder of thousands of others. The movie takes place in Rwanda during tumultuous times in the mid to late nineties. Two African tribes, the Hutu and the Tutsi are at war with one another, with hundreds of thousands losing their lives in savage ways.
When the Tutsi civilians begin to be murdered by Hutu militiamen, they flee to the hotel managed by Paul Rusesabagina (played by Don Cheadle, Ocean’s Eleven and Twelve, Crash). He uses his job and influence to house over a thousand refugees, to keep them from being murdered. The movie is similar to a Schindler’s List type story, but set in Rwanda. It’s an amazing movie; very touching and well written/directed.

Introducing the Clip:
This movie tells the graphic and true story of the brutality and murder the Hutu tribe of Rwanda inflicted on the Tutsi tribe of Rwanda during the 90’s. In this clip you are about to see, American camera crews have captured evidential footage that actually shows the genocide happening in Rwanda. In other words, now America has proof that thousands and thousands of innocent people are being murdered.
That’s good news for hotel manager Paul Rusesabagina who has become wrapped up in the violence. He is using his hotel to offer Tutsi tribesmen a safe place to hide. Although the camera footage shows several people being murdered, at least now they will get some help…or so he thinks. Let’s take a look and see what happens.

BEGIN CLIP AT 42 minutes and 12 seconds (in Chapter 10).
Note: This scene uses the word “hell” at the very end. Preview this clip BEFORE using it in front of your students to make sure it meets your standards.

FLEMING: What is this?

(DAGLISH puts tape into VCR and then looks at PAUL. He hesitates as they make eye contact and then exits. FLEMING begins to view tape. He picks up the phone and dials a number.)

FLEMING: (over his shoulder to RWANDAN) Where did you get this?

RWANDAN: Half a mile down the road.

FLEMING: (into phone) Fred, it’s David. I’ve got incredible footage. It’s a massacre–dead bodies, machetes. If I get this through right away, can you make the evening news? (He pauses to listen.) Yeah. (He pauses again.) You have to lead with this.

(Scene cuts to the hotel lobby, where DAGLISH is sitting with a lady. PAUL enters.)

DAGLISH: Hey, Paul. Listen, sorry about earlier. If I’d known you were in there, I wouldn’t have—

PAUL: I am glad that you shot the footage and that the world will see it. It is the only way we have a chance that people might intervene.

DAGLISH: Yeah, and if no one intervenes, is it still a good thing to show?

PAUL: How can they not intervene when they witness such atrocities?

DAGLISH: I think if people see this footage, they’ll say, “Oh, my God, that’s horrible,” and then go on eating their dinners. What the hell do I know? Listen, you wanna just relax?

PAUL: No, I have more work to do. Thank you for your offer. Please enjoy your evening, Mr. Daglish.

Transitional Statement:
When I watched this movie, I felt so convicted at this part. I was one of the people watching this movie, saying, “Oh my gosh, that’s horrible,” but doing nothing to help. Isn’t it sad that there are times when we see something horrible, but don’t do anything to make a difference? Tonight we’re going to talk about the difference between just believing something or having an opinion, and actually having the actions to back up our words. Perhaps our walk with Christ is a little more than just having certain beliefs. Let’s go through these questions in our discussion groups and deal with this idea of action.

James 2:14-17
What good is it, my brother, if a man claims to have faith but has no deeds? Can such faith save him? Suppose a brother or sister is without clothes and daily food. If one of you says to him, “Go, I wish you well; keep warm and well fed,” but does nothing about his physical needs, what good is it? In the same way, faith by itself, if it is not accompanied by action, is dead.


Wrap-Up:
It’s a shame that there are so many opinionated people out there, who don’t do anything to make a difference. James calls us to put actions to our words. Being a follower of Christ isn’t only someone who declares the right opinions and has the correct view on right or wrong. A follower of Christ is someone who is willing to put actions with his/her beliefs. Anyone can boast about any radical beliefs, but it takes a true follower and someone who is willing to actually do what is right, even if it means taking a risk. This world can’t afford for us to just see what’s right or wrong around us. We need to suck it up and build some courage to act. Let’s take some time and pray for each other in our discussion groups, to build our courage and put action with our faith.