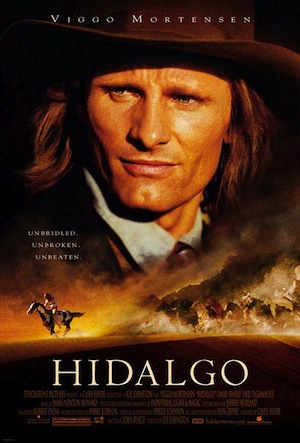 Main Point:
No matter how good temptation looks, it’s possible to overcome it.

Attention Grabber: Cue Scene 12 of Hidalgo DVD, 2004 (Viggo Mortensen), Rated PG-13 for adventure violence and some mild innuendo, though none are in this scene. See below for explanation.

Plot Summary: Set in 1890, this is the story of a Pony Express courier, Frank T. Hopkins,(Mortensen), who travels to Arabia to compete with his horse, Hidalgo, in a dangerous 3,000 mile race across the Arabian Desert for a massive contest prize.

Intro Statement: Temptation comes in many ways and no one is immune to it. It’s been said that “responsibility is the ability to respond to a situation.” Tonight we’re going to look at our responsibility in overcoming temptation and hopefully see that no matter how good temptation looks, it’s possible to overcome it. Before we break up into small groups I want to show a clip that illustrates these very points. (Set clip up for your group.)

SHOW CLIP HERE. Scene 12 “A Daughter Returned” on the DVD. (This takes place after Hopkins has rescued Jazira, the Sheik’s daughter, they’ve escaped into the desert, and are returning to the camp. Lady Anne Davenport, an aristocratic horse breeder, summons Frank to her tent. She offers him 30% of the winner’s purse and herself to deliberately lose the race so that her horse can win. He didn’t have money, so it would have been a good offer to take.

Lady Davenport: You’ve taken him (the horse) so very far from anything he’s ever known. All for the sake of money. Are you willing to kill him for money? The winner’s purse is $100,000. Pull out now and I’ll compensate you 30% in silver for turning in a serious effort.

Lady Davenport approaches him, talks more, and comes on to him…

Lady Davenport: Just where are we then? Here… alone… in the last corner of Arabia.

Hopkins: Yeah… when you’re in a desert, the sight of green grass and fresh water can be mighty tempting. Sometimes you’re just seeing things.

(Hopkins says, “Good night, ma’am,” and tells her he’ll sleep on her offer, though it’s obvious to her and the audience that he doesn’t intend to either cheat or sleep with her.)

STOP HERE.Divide into Small Groups:
Let’s go ahead and split up into our discussion groups, and then afterward we’ll come back together for a final word.

ASK A FEW: Looking back, what would you do differently in the situation you were just thinking of?

1 Tim. 6:9-10
People who want to get rich fall into temptation and a trap and into many foolish and harmful desires that plunge men into ruin and destruction. 10 For the love of money is a root of all kinds of evil. Some people, eager for money, have wandered from the faith and pierced themselves with many griefs.

ASK A FEW: In the movie clip, greed was one of the temptations. According to the passage, what does falling into temptation bring us? Is it worth it in the end?

Hebrews 2:18
Because he himself (Jesus) suffered when he was tempted, he is able to help those who are being tempted.


ASK SOMEONE: Who, then, is stronger than temptation? (Christ)

Wrap-up:
Now you know more clearly than ever that no matter how good temptation looks, it’s possible to overcome it.

You’ll know it even better the next time you overcome it. So in closing I want us to go around the circle and share what our greatest temptation is right now and what our game plan is to overcome it. Then we’re going to pair off and pray for each other to do just that.