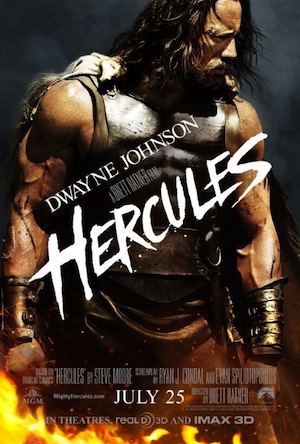 Main Point: The only way to withstand the Enemy’s attack is to stand together. We do that by looking out for one another.

The Movie Clip: Shield Wall
Hercules tells the story of the mighty Greek warrior after he’s completed the infamous Twelve Labors assigned to him by the gods. Essentially, he and his band of fighters are mercenaries, selling off their services to the highest bidders. But Hercules and Company will be put to the test when they are invited by the King of Thrace to save his kingdom from an oppressive warlord.

Dwayne “The Rock” Johnson stars as Hercules, and faces the worst that ancient Greek mythology can unleash against him. It’s got comical scenes in it, but focuses on the action sequences that make many of The Rock’s films so popular.

It was rated PG-13 by the MPAA for epic battle sequences, violence, suggestive comments, brief strong language and partial nudity. However, none of those elements are in this short clip.

Introducing the Clip:
I want to show you a short clip from the movie Hercules starring everybody’s favorite football player-turned wrestler-turned movie star, Dwayne “The Rock” Johnson. In this clip, Hercules and his crew have been asked to guard the Kingdom of Thrace from an evil warlord known as Rhesus. The only army they have to work with is comprised of humble farmers with no knowledge of military strategies. Hercules and his companions have a short amount of time to train the men to defend their land, and they start by teaching them about a tactic known as the “shield wall.” Take a look.

BEGIN CLIP AT 0 hours 20 minutes and 36 seconds (after Amphiaraus drops the swear word!)

(The clip essentially shows Hercules training the group of men gathered in the court before their king. Here is the key dialogue.)

Hercules: Corpses. Every last one of you. Because your shield wall was weak. Dead. Dead. Very dead. Soldier, many lives depend on you. When attacked, lock your feet into the ground. You understand?

Hercules: When a shield wall is strong, nothing can ever defeat it. You must learn to work together, react together. When you do, each individual will become a link in a chain that will be stronger than iron.

Transitional Statement:
Hercules couldn’t have been more blunt if he’d tried. He basically said that the soldiers would have to stand together or they would die. He then told them that if they could perfect the shield wall, they’d become stronger than iron, together. That’s not so different from the spiritual battle that you and I are in as Christians. The only way for you and I to withstand the Enemy’s attack is to stand together. According to the Bible, we do that by looking out for one another, and taking care of one another. Let’s explore this more in our small groups and then we’ll re-gather for a final word.

If you have any encouragement from being united with Christ, if any comfort from his love, if any fellowship with the Spirit, if any tenderness and compassion, 2 then make my joy complete by being like-minded, having the same love, being one in spirit and purpose. 3 Do nothing out of selfish ambition or vain conceit, but in humility consider others better than yourselves. 4 Each of you should look not only to your own interests, but also to the interests of others. 5 Your attitude should be the same as that of Christ Jesus: 6 Who, being in very nature God, did not consider equality with God something to be grasped, 7 but made himself nothing, taking the very nature of a servant, being made in human likeness. 8 And being found in appearance as a man, he humbled himself and became obedient to death– even death on a cross!


Wrap Up:
I love the clip we watched tonight because it gave such a powerful and clear picture of what our fight against our enemy looks like and how important it is to stand together. We saw Hercules instruct those soldiers to dig their feet in, stand strong together, and work as a team. He said that the only way to survive the battle was to do all those things.

When it comes to our spiritual battle, there are a few things we can do to build our own “shield wall.” For instance, we can pray for one another. We can also serve one another. We can help a weak brother or sister by pulling around them in times of distress. And the thing is, unless we do those kinds of things, we won’t be effective together in our fight against the devil.

Basically, the Bible passage that we read told us to take care of the interests of others. If we do that, we’re ensuring that our friends and our fellow Christians stay strong. If THEY stay strong, then WE are strong. So there are lots and lots of good reasons to do what God’s Word says!

As we close up in prayer, I want to invite you guys to get into small prayer huddles – the key being “small.” Maybe just two or three to a group. Pick someone that you know may be going through an attack of the enemy and spend some time praying together. Offer your help, but ask God to help them in the ways that ONLY He can. After we’ve done that, I’ll close us in prayer. And if you need to talk more about standing strong together in the face of our fight, hang around and speak with one of our adult leaders.