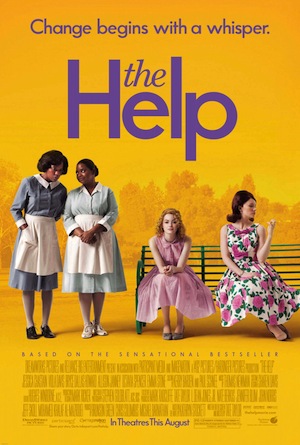 (Dreamworks, 2011)
Main Point: As Christians, God expects us to be generous and helpful to everyone, regardless of status, race, nationality, or ethnicity.

Movie Clip: You’ll Thank Me Later
Without a doubt, The Help was one of the best films of 2011. While lots of people may think the movie was geared to women only (because of the heavy female cast), this film has an important message for everybody, man or woman, young or old, black or white.

This movie had a superb cast (Emma Stone, Viola Davis, Octavia Spencer, and Bryce Dallas Howard) filled with life-giving heroes and life-sucking villains. (If anybody ever thought all women were nice and kind, let me introduce you to Hilly Holbrooke. Geez.) Further, it had a great story…built on stories, no less.

Skeeter (Stone) is a female author trying to make a difference in the South during the 1960s. She decides to write a book about black maids in the South entitled The Help. This collection of stories serves as a modern day Uncle Tom’s Cabin to highlight the prejudices and mistreatment of blacks during the struggle for equality.

The movie was rated PG-13 for thematic material. Aside from a few swear words here and there, the movie steers clear of any imitatible behavior that parents or youth workers would be concerned about.

Introducing the Video:
The Help is set in the South during the Civil Rights Movement of the 50s and 60s. During that treacherous era, there was lots of hatred and bitterness between blacks and whites. In this scene that I am going to show you, you’re going to see Yule May, a black maid, ask her white employer, Mrs. Hilly, for a loan; she is about $75 short of sending her twin sons to college. I want you to take a look at the married couple’s reaction, and especially take note at how Mrs. Hilly responds to Yule May’s request.

(The scene opens with Yule May, the African-American maid, cleaning up from breakfast with a concerned look on her face. Finally, she breaks her silence.)

Yule May: Mrs. Hilly. I would like to ask you and Mr. Williams something. My twin boys graduated from high school, both on the honor roll. Well, me and my husband, we been saving for years to send them to Tugelow. We short about $75 on one of the tuitions.

Mr. Williams: Whew, I am late. I gotta get going. See ya tonight honey.

Hilly: Okay. (As the cowardly husband makes his exit, she turns back to Yule May.) Go on.

Yule May: Well, now, we’re, uh, faced with having to choose which son can go if we don’t come up with the money. Would you consider giving us a loan? I – I’d work every day for free till it was paid off.

Hilly: That’s not working for free, Yule May. That’s paying off a debt.

Hilly: As a Christian, I’m doing you a favor. See, God don’t give charity to those who are well and able. You need to come up with this money on your own, OK?

Hilly: You’ll thank me one day.END CLIP AT 47 MINUTES AND 51 SECONDS.

Transitional Statement:
Um. Wow! That’s all I can really say about that clip. It’s really hard to imagine a person denying someone help on such an important need such as college. But then, to defend her stance based on her “Christian principles” is almost more than I can stomach. But lots of Christians hide behind misconceptions about their faith, hoping that those misconceptions will make them immune to being generous, loving, helpful, or forgiving of others. So, let’s take a look at the Bible to see what it says about how we should treat others…as a Christian.

17 As for the rich in this present age, charge them not to be haughty, nor to set their hopes on the uncertainty of riches, but on God, who richly provides us with everything to enjoy. 18 They are to do good, to be rich in good works, to be generous and ready to share, 19 thus storing up treasure for themselves as a good foundation for the future, so that they may take hold of that which is truly life. 20 O Timothy, guard the deposit entrusted to you. Avoid the irreverent babble and contradictions of what is falsely called “knowledge,” 21 for by professing it some have swerved from the faith. Grace be with you.

Wrap Up:
You know, it’s gotta be really depressing for Jesus to hear things like Hilly Holbrooke said in this movie. “I can’t or won’t help you because I live for Jesus.” Just think about how stupid that sounds when comparing that mindset to Jesus, the person who literally gave His life for others, KNOWING that we weren’t worthy of such a gift.

As followers of Jesus Christ, I never want to hear anything like this said by us. Not only must we avoid the terrible mistake of Hilly – who may or may not have even been a Christian in the first place – but we must do all we can to ensure that we are serving others who need us…even if they are different than us.

Especially if they are different than us!

In our small group time, we talked about people who need our help right now. Granted, we’ve come a long way from the race prejudices that were prevalent 50 years ago, but there are still so many needs today. This neighborhood or that group or this family in our community or that country way over there needs Jesus’s love and our help. What are we going to do about it?

The Bible passage we talked about during our time together makes it crystal clear. We are to give generously of ourselves to make sure we avoid the stupid sins of wealth…and so that others will have what they need.

Jesus carefully avoided falling prey to the seductive call of riches. He also led all of humanity by His example in caring and giving for others. Let us follow Him in this example starting now.