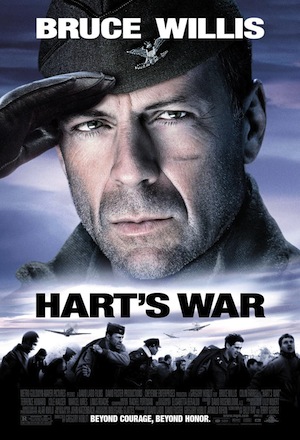 (MGM, 2002)
Main Point of Discussion: His sacrifice leads us home.

The Movie Clip: “You are willing to exchange your life for theirs?”

Hart's War, staring Bruce Willis and Collin Ferrell, is a great movie about honor, bravery and sacrifice. Set in a German POW camp during World War II, this movie helps us understand what sacrifice means.

Introducing the Clip:
Today I want to show you a clip from the movie Hart's War. Colin Farrell plays Lt. Thomas W. Hart, a young WWII officer with a cushiony job, who while on a routine delivery is ambushed, taken prisoner, tortured and sent to a POW camp. There he meets Col. William A. McNamara (Bruce Willis), a fourth-generation solider whose toughness is rivaled only by his cleverness.

The Americans continue to fight the war from behind the fences and plan an escape to destroy a nearby munitions plant. Every perceived act of rebellion by the prisoners is met with extreme retaliation. The Germans execute random prisoners for discipline, discouraging any attempts to escape. A murder in camp, a mock court marshal and racial tension provide them the chance to set a plan into motion. Everyone, especially McNamara, understands and is willing to accept the consequences for an escape attempt.

The stage has been set, the players are in place, and the trial is nearing its end. McNamara and 34 men are escaping while Hart delivers his closing arguments. Even though he is innocent, Hart confesses to the murder, willing to sacrifice himself. This leads to the Germans discovering the escape attempt.

Hart: These men knew nothing, Colonel.

Visser: Line them up! You will be the first.

Hart: These men knew nothing.

Visser: You will be the first!

Hart: Colonel, they knew nothing!

Visser: So, your men are saboteurs as well?

McNamara: No, Colonel, they're just soldiers. They were following my orders. I assume complete responsibility.

Visser: That's very noble of you. Seems you've won our duel after all, Colonel.

McNamara: No. We both lose, don't we?

Visser: Yeah. And now you wish to trade your life for theirs?

McNamara: Yes, I do.

Visser: Very well.END CLIP AT 1 hour 56 minutes and 38 seconds. (Please note: there is a graphic scene of violence right after this clip, please be prepared to stop it at the appropriate time.)

Transitional Statement:
Our culture loves heroes. We love stories of sacrifice. We want to celebrate those who are willing to sacrifice themselves for their country, their family, for their friends and yes, for God.

In that powerful scene we see one man willing to exchange his life for the lives of his men. That kind of sacrifice may lead to medals or to movies or even to victory. But only one sacrifice leads us home.

Let's take some time to discuss the sacrifice that leads home.


I John 3:16 (NIV)
This is how we know what love is: Jesus Christ laid down his life for us. And we ought to lay down our lives for our brothers.


Romans 5:8 (NIV)
But God demonstrates his own love for us in this: While we were still sinners, Christ died for us.

John 3:16 (NIV)
For God so loved the world that he gave his one and only Son, that whoever believes in him shall not perish but have eternal life.


Close Your Group in Prayer.

Wrap Up:
The story of Hart's War is a powerful and moving one. To think that a man would return to a POW camp in order to save his men, knowing he would be executed – that's an awesome story. However, it fails in comparison to the story of Jesus – willing to exchange His life for ours. He was willing to die so that we could live.

Because of McNamara's sacrifice, his men got to go home; because of Jesus' sacrifice we get to go to our heavenly home.