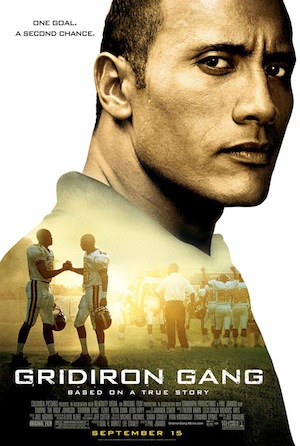 Main Point of Discussion: Our faith in God starts a change in us.

The Movie Clip: “I didn’t even know what was happening to me.”

Every once in a while a film is released that reminds youth workers that we can make a difference. Like Coach Carter, Stand and Deliver, Renaissance Man… this is one of those films. If you haven’t seen it, stop by the video store and pick it up. (As I mentioned in my review, yes, there is some violence and pretty bad language speckled throughout the film—a realistic glimpse of juvenile correctional institutions. But don’t throw out the baby with the bathwater. This film is a gem. This is the type of raw film I would have shown to my outreach clubs when I worked with a pretty tough group of campus kids. It reveals a realistic glimpse of street life, tough choices, and their consequences, earning its PG-13 rating.)

The Gridiron Gang is about a counselor in a juvenile detention center who wants to give kids a second chance. He starts a football team to teach them discipline, teamwork and accepting criticism.

This movie has several good clips that you could use to promote discussion. We’ve written three different discussion starters on different subjects from this film; the following is one of them.

(CLICK HERE for IMDB’s page of online previews for this film. Trailer #1 and #2 are actual previews, 3-6 are various clips from the film, just to give you a little taste.)

In this scene Coach Porter has a one-on-one conversation with an inmate named Willie about the change that is happening in his life.

NOTE: Part of this clip is used for another discussion (about forgiveness). But this write-up (other than the movie description) is totally different.

NOTE: This clip has two cuss words in it. This creates a tough situation for some of us…if you have access to some editing equipment, it's an easy fix. Use your own discretion. IMDB has a low res. version of the clip with one of the words cut out of it (CLICK HERE).

Introducing the Clip:
Today I want to show you a clip from the movie The Gridiron Gang. Many of you have already seen this movie, but for those who haven’t, this scene is a conversation between a juvenile inmate named Willie and a counselor, Coach Porter, played by The Rock. Coach Porter wants to give kids a second chance. He starts a football team to teach discipline, teamwork and accepting criticism. The results are amazing. Willie, one of the players, not only learns teamwork, but also strikes an “unspoken friendship” with a rival gang member. In an act of valor, Willie ends up preventing his new friend, this “rival gang member” from being shot by one of Willie’s old “homeboys.” He saves this other kid because now he doesn’t see him as an enemy, he sees him as a teammate. But now Willie is having second thoughts. He’s questioning his loyalty and wondering what is happening to him.

He doesn’t understand the decisions he’s making… because for the first time, he seemes to do something… right! In this scene, the coach is talking him through this.

BEGINING THE CLIP: It’s hard to find a starting point for this clip because of the language. It’s your call. The IMDB clip I link above (which doesn’t have the coach’s cuss word below) starts mid argument about 1 hour, 31 minutes and 31 seconds.

Coach Porter: Why did you side with your enemy over your own homeboy?

Willie: (yelling) Because of you! And this da** football team, man.

Coach Porter: That’s bull sh**. You made a choice.

Coach Porter: I do. (pause) You’re not the loser you were when you first got here Willie. You’re just not used to being a winner.END CLIP at 1 hour 32 minutes and 24 seconds (just before another great dialogue about forgiveness. CLICK HERE for that VIDEO CLIP IDEA.)

Transitional Statement:
Willie is changing and he doesn’t know why. Coach Porter’s first observation is that Willie made a choice, but Willie reacts, “No I didn’t, I didn’t even know what was happening to me.” As I saw what Willie was experiencing, I thought, “Wow, what an example of what happens to us when a person becomes a Christian.” Being a Christian is not about trying to be good. It is not about trying to change ourselves (for example, “10 steps to becoming a new person”). When we become Christians, something happens and we begin to change.

When we become Christians, God starts changing us. We don’t change ourselves… we just trust God to do it.

2 Corinthians 3:4-6 (NLT)
It is not that we think we can do anything of lasting value by ourselves. Our only power and success come from God.


(Leader-something to chew on: If we read further in this 2 Corinthians passage, it tells us that this change in us isn’t because of certain rules we followed… it’s because of God’s Spirit in us. God came into us and began to make everything new.

People often misunderstand the Bible when it talks about the “fruit” in our lives. I’m talking about the fruit of the Spirit in Galatians 5:22-23. Many people look at it as a sort of list of things we must produce ourselves: “I need more love, more joy, more longsuffering, more gentleness and more self-control.” And then we might ask ourselves, “How can I love more, how can I show more longsuffering?” BUT WHEN WE DO THAT WE MISS THE POINT.)

Read the following passage that talks about the fruit of the Spirit and ask yourself one question: WHO produces this fruit?

Galatians 5:22-23 (NLT)
But when the Holy Spirit controls our lives, he will produce this kind of fruit in us: love, joy, peace, patience, kindness, goodness, faithfulness, [23] gentleness, and self-control. Here there is no conflict with the law.

WRAP UP:
True Christianity can't be measured by a list of do’s and don’ts; it is concerned with internals—who we are inside. And those can't be produced on demand. We can't make fruit “happen.” In fact, with true Christianity we now have an inner passion: the Spirit of God who comes to live inside us. There is no need to push, because just having Jesus around is enough. The more you “hang out” with Jesus, the more He rubs off on you. The passion comes from within rather than from external pressure. There is an inward desire to please Him because He loves us so much. Some self-help groups are forever pushing, coercing, insisting and demanding. People feel like they have never done enough.

Where does one learn to experience the true Christianity that transforms from within? Most of the time we don’t learn this kind of change in a seminar, school or self-help book. We learn to live by the power of the Holy Spirit when our human efforts just don’t work anymore. We might feel at that moment that life is over, but in actuality life is just beginning because we are learning to depend on a whole new supernatural, resurrection power.

When we preoccupy our lives with externals, we take away all the focus from what God is doing. We can't be good by trying harder. That is counterproductive and makes us ungodly. The only thing that comes from trying to obey a list of do’s and don'ts is hypocrisy. If we have to look good on the outside, we can't be honest and admit what is really going on at home and in our relationships. We can't admit struggles. We can't admit that we make mistakes. We can't look weak, because that would be unspiritual. But we don't have to live that way.

Some self-help systems focus on success. And many churches focus on what we are “doing” for Christ. Instead we should openly confess our weakness and brokenness. The church should be a place where we can talk freely and openly about the areas where we are struggling and the mistakes we have made. Then we don't have to prove anything, because our acceptance is not based on performance. What matters is what God is doing inside, and every one of us is a work in process.