The Gospel According to the Walking Dead – Season 4, Episode 6 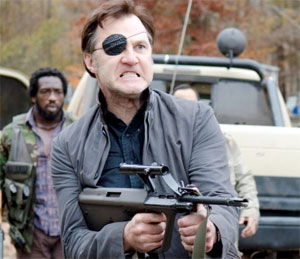 This week’s episode is all about redemption and the desire for a new beginning. But the hero in this episode emerged from an unlikely character… the Governor.

Is everyone truly worthy of redemption?

Talking Dead’s Chris Hardwick is skeptical. “You can change your name, but you can’t change who you are.”

Our last recollection of the Governer was as he mowed down his own people with an automatic weapon in an insane rage at the end of Season 3. Now, 6 episodes later, we flashback to pick up where that story left off, discovering a different side of this same tyrant who collected heads in jars, killed his friend Milton, practically raped Maggie… the list of offenses seems endless.

The Walking Dead producers asked plenty of their fans this week, withholding even a glimpse of Daryl, Rick, Michonne and the group at the prison. Instead, in a very Lost-like fashion, we take a step back to catch up on the backstory of the evil character we found lurking outside the prison last week at the end of Episode 5.

But this time… he didn’t look so evil.

Parting greatly from the comic’s version of the character, the eye-patched Governor returned in this episode to help a struggling family survive the zombie apocalypse. Viewers cowered time after time, expecting the Governor to snap and his evil side to emerge. But the evil Governor never emerged. Instead, the Governor risked everything to save this family, especially a little girl named Megan who desperately searched for a father figure.

The Governor seems to want to erase his mistakes and forget his old life.

In the end of the episode his old life collides with his new, as his old comrade Martinez encounters him.

Which Governor will emerge?

Prior to this episode, the Governor had proven to be despicable on all accounts. Is that a thing of the past? The question this episode proposed was, “Is anyone beyond redemption?”

Immediate after this episode, Chris Hardwick polled The Talking Dead fans with this question:

Do you think the governor has changed for the better?

People are torn. What do you think?

1. Why do  you think the Governor’s companions left him immediately after he snapped last season?

2. Why did the Governor burn down his old community?

3. What do you think first attracted the Governor to go up and meet the family living in that building?

4. Do you think the Governor is a new person?

5. Is it possible the Governor could change his ways and become good? Explain.

6. Is anyone beyond redemption? Explain.

God has a history of forgiving the worst of sinners. Name it: the city of Nineveh, Jesus forgiving tax collectors, prostitutes and the man on the cross next to him. God seems to be much more concerned about our future than our past.

For as high as the heavens are above the earth,
so great is his love for those who fear him;
as far as the east is from the west,
so far has he removed our transgressions from us. (Psalms 103:11, 12)

7. According to the passage, how far has he removed our transgressions- our sins? How far is that? Why does he use this analogy?

8. Does this passage shed any light on the question: is anyone beyond redemption?

Repent, then, and turn to God, so that your sins may be wiped out, that times of refreshing may come from the Lord… (Acts 3:19)

9. What do we need to do to have our sins wiped clean?

10. Is this good news—that God is willing to wipe our sins clean regardless of our past?