The Gospel According to The Walking Dead—Season 4, Episode 15 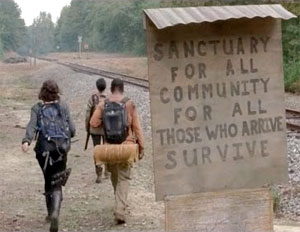 Terminus: n. [tur-muh-nuhs] 1. The end of the line.  2. The end or extremity of anything. 3. The point toward which anything tends; goal or end.

In 1837 the Western and Atlantic Railroad drove a post into the ground declaring the end of the line, or “terminus” for the railroad. This post still stands in present day Atlanta. The 19th century city was actually called “Terminus” for a few years, toying with a few other names until 1845 when it was changed to “Atlantaca-Pacifica,” which was quickly shortened to Atlanta, the official name from 1847 to present.

For weeks The Walking Dead fans have been wondering about a place called Terminus. In the fallout of the prison massacre our scattered group have all encountered signs of a perceived Utopia by that name. One by one, they’ve taken the bait. Call it a desire for community, or maybe even just plain ol’ curiosity. They all are following the tracks to the end of the line.

Is this Terminus just a ploy to draw wandering people and exploit them one way or another? Or is it what it claims to be: SANCTUARY FOR ALL?

On The Talking Dead, immediately following the show, fans voted with their speculation about Terminus. Fans proved overwhelmingly skeptical:

Fans aren’t the only ones wondering. For weeks our favorite characters have been speculating about the possibilities. Tyreese encounters a man who tells him there’s a safe place at the end of the tracks. Maggie and Glenn used it as a meeting point. Sgt. Abraham and Eugene see it as a pit stop to gather supplies for their journey to save the world. And Daryl’s new group of friends seem skeptical whether they’ll even be allowed in.

Daryl: You seen this before?

Joe: Oh yeah. And I’ll tell you what it is; it’s a lie. You know, a sanctuary for all. Ya think they’re gonna welcome guys like you and me with open arms?

Is Joe right? Is it too much to hope for someplace good in a world so wrought in ruin and pain?

1. What do you think Terminus is?

2. How is our group going to respond if Terminus is as you predict?

3. Why do you think different characters have different expectations for Terminus?

4. What kind of different expectations do people have for the end of our lives? Does God offer “sanctuary for all”?

5. Joe asked Daryl, “Ya think they’re gonna welcome guys like you and me with open arms?” What did he mean by that?

6. How welcoming is God to people with sinful pasts? (see Romans 5:8)

28 Then Jesus said, “Come to me, all of you who are weary and carry heavy burdens, and I will give you rest. 29 Take my yoke upon you. Let me teach you, because I am humble and gentle at heart, and you will find rest for your souls. 30 For my yoke is easy to bear, and the burden I give you is light.”
(Matthew 11:28-30, NLT)

7. Who does Jesus welcome in these verses?

8. What does Jesus offer those who come to him?

10. What is one thing from these verses that you can apply to your life this week?

Your comments?
What about you? What do you think next week’s episode will reveal?

I guess we’ll soon find out as the final episode unfolds, marking the end of the line, or “terminus,” for Season 4.