The Gospel According to The Walking Dead—Season 4, Episode 10 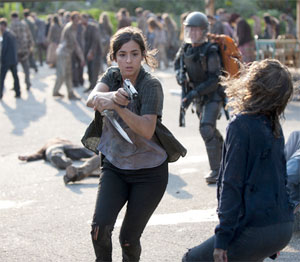 Yes, I’m a huge fan of this show, and the writing is usually way above par—one of the more creative and thought provoking shows on TV. That being said, it seemed as if this episode and the next had quite a few, “Really?” moments.

Allow me to rant about a few elements:

But those questionable elements aside, I still found the episode intriguing. I loved the Tarantino-esque time overlaps from Beth and Daryl to Tyreese and the girls. And I really thought the scene between Glenn and Tara was well done, particularly when Glenn heard that Hershel had been killed. Actor Steven Yeun was especially convincing, not over-acting Glenn’s grief, but effectively revealing his surprise and pain.

It’s at the end of this episode that these two share some good moments. First, when Glenn encounters Tara at the prison:

Tara: I was part of this.

Tara: Then what are you doing?

Glenn: I need your help.

The dialogue seemed very authentic in this scene. Tara is experience an insane amount of guilt, and Glenn is showing grace, mixed with the simple need to survive, and he knows his chances are better with Tara then on his own.

I don’t know about you, but I’ve done some pretty stupid things in my lifetime and I’ve felt some pretty intense guilt. I’ve begged for forgiveness before. I’ve felt like… well… what Tara said.

1. Why do you think Tara wasn’t making any effort to rescue herself at the prison?

2. Do you think Glenn truly forgave her for being part of the Governor’s group?

3. Is Tara right to feel the guilt she feels?

4. Should Glenn and the others forgive her? Is “I’m sorry” enough?

23 So if you are presenting a gift at the altar in the Temple and you suddenly remember that someone has something against you, 24 leave your gift there at the altar. Go and be reconciled to that person. Then come and offer your sacrifice to God. (Matthew 5:23-24, NLT)

5. What is so important to the person in these verses, that he must leave his gift at the altar?

6. Why is it so important that we reconcile with someone before worshipping?

7. Why is forgiveness so important to God?

9. Tara was pretty hard on herself. Does she need to forgive herself? Explain.

“To forgive is to set a prisoner free and discover that the prisoner was you.”

Let’s be silent and pray for a moment. As you are silent, think about your relationships, and especially if you are a prisoner that needs to be set free tonight. If you are holding a grudge against anyone, then now is the time to make that right. Pray and ask God to give you the strength to forgive.