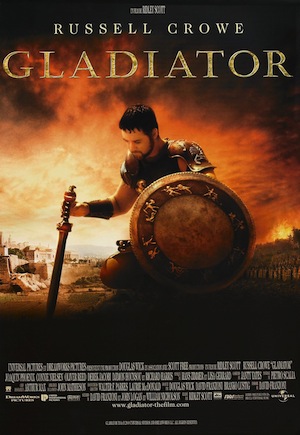 Main Point: We must live for Christ, because what we do in life echoes in eternity.

The Movie Clip:
To date, Gladiator has been one of Russell Crowe’s biggest and most impressive performances of his storied career. In this film directed by Ridley Scott, Crowe plays a Roman general by the name of Maximus Meridius who has been betrayed by his emperor’s evil son. Maximus’ family is murdered by the new emperor and the famed general is sold into slavery.

The movie is rated R, mostly for the various scenes of graphic violence.

Introducing the Clip:
I want to show you a short clip from a classic film, Gladiator. It comes from the very beginning of the movie before our hero Maximus, played by Russell Crowe, is betrayed by the emperor’s cruel son. In this clip, you’re going to hear a speech that General Maximus gives to his troops before leading them into battle against a fierce enemy. It’s a tense moment, so he lightens the mood with a simple joke and then talks about eternity. Take a listen to what he says because it’s true.

The clip can also be found on the actual DVD starting at 0 HOURS 5 MINUTES AND 08 SECONDS. It runs for just over two minutes and stops at 0 HOURS 7 MINUTES AND 13 SECONDS.

The scene is a simple one. General Maximus of the Roman Empire speaks with his closest advisors on the brink of a great battle with a Germanic tribe in Europe. He also speaks with his cavalry and tells them that what they do in life “echoes in eternity.”

This entire small group discussion is built on that one important line.

Transitional Statement:
What we do in life echoes in eternity. It’s a powerful line, not just because a movie hero uttered it, but because it’s true. What we do here in this life greatly impacts how we spend our next. Conversely, what we don’t do in this life also echoes in eternity. Bottom line: a lot is riding on how you live your lives. You need to make your life count as best you can. I know of no better way to make your life count than by living it for Jesus. Friends, we must live for Christ, because what we do in life echoes in eternity.


Wrap Up:
Each time I watch this movie, I am struck by how confident Maximus was in this scene. He simply says, “Hey guys, do your best out there, because how you live in this life makes an impact on how you live in the next.” He believed his actions on Earth affected his afterlife.

Interestingly enough, the Bible also teaches that our lives on Earth impact our eternities. But let me clear up a couple of huuuuuuuuuuge distinctions between Maximus’ beliefs and the Bible’s teachings.

Here is the big idea I want to leave with you. We are saved for Heaven by our trust in Jesus Christ and nothing else. He died on the cross to pay the penalty of our sins. If you put all of your hope and trust in Him, then you will be saved for Heaven and from Hell. That truth is clear all across the New Testament.

Here’s how it’s supposed to work. If you have put your hope and trust in Jesus to save you, then you will automatically want to live for Him. You will want to share with others. You will want to tell others about His love. You will want to give sacrificially of yourself because you know that He has given of Himself. These are just a few examples. Basically, because Jesus has saved you, you should want to live your life for Him.

Make sure to live for Jesus every way you can. It impacts your eternity!