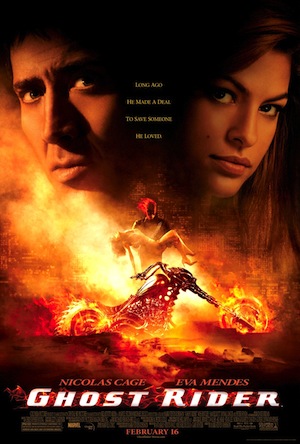 Main Point of Discussion: Through Christ, you can have a fresh start.

The Movie Clip: “A Second Chance.”

Ghost Rider is another Marvel comic book super hero brought to the big screen. This story is about Johnny Blaze who as a teenager made a deal with the devil to save his father’s life (De Ja Vu of a Charlie Daniels song… but with no fiddle). Now, the devil has come for his due. By day, Johnny is the world’s most famous motorcycle stunt man… but at night, in the presence of evil, he becomes the Ghost Rider. Forced to do the devil's bidding, Johnny is determined to confront his fate and use his curse and powers to defend the innocent.

Introducing the Clip:
Tonight I want to show you a clip from the movie Ghost Rider. The story is about Johnny Blaze, a motorcycle stuntman who as a teenager sold his soul to the Devil in order to save his dying father. But the Devil tricked him and although his father was healed of his terminal cancer, he died the next day in a devastating motorcycle accident.

Since that moment Johnny has carried the heavy burden of the guilt on his shoulders. In this scene he is questioning life, searching for forgiveness, and looking for freedom from guilt. The movie isn’t that great- I’d skip it if I were you. But I like this scene. Watch this!

BEGIN CLIP AT 25 minutes and 38 seconds as they enter JB’s place. (Personally, I wouldn’t start the scene until about 26 minutes and18 seconds after Mack looks at JB’s religious book that has a freaky picture on it. The key dialogue in the scene starts after Mack turns off JB’s music and chimp video.)

Mack: This jump is nuts. All right man? I mean, field goal to field goal, and now you’re adding cars? I mean, what are you trying to prove?

Mack: That it’s you?

JB: Do you believe people get second chances?

JB: If somebody makes a mistake, a big mistake, do you think that person should have to pay for it every day for the rest of their lives?

Mack: Are you talking about your daddy’s accident?

JB: That I can take a negative and turn it into a positive. That I can have a second chance too.

Mack: JB, what happened way back when to your daddy was not your fault. You know that right? (pause)End at 28 minutes and 10 seconds during that dramatic pause, before Mack’s next line.

Transitional Statement:
Johnny asks the questions so many people around the world are asking… “If somebody makes a mistake, a big mistake, do you think that person should have to pay for it every day for the rest of their lives?”

If somebody makes a mistake, a big mistake, do you think that person should have to pay for it every day for the rest of their lives? And how big is “a big mistake?” What about medium sized mistakes? Or what about a whole bunch of little mistakes? Is there a cap or threshold where we finally will max out and be condemned?

I John 1:8 (NLT)
If we claim we have no sin, we are only fooling ourselves and not living in the truth.

Group Leader: (Then say to your group…) “Well, tonight I have good news because God has not just given us a sign, He has given us a very clear answer on how to have a second chance.”

I John 1:9 (NLT)
But if we confess our sins to Him, He is faithful and just to forgive us our sins and to cleanse us from all wickedness.

Wrap Up:
Tonight we’ve been talking a lot about sin and forgiveness. As you and I live our lives every day we need to revisit these two verses. We need to daily admit we sin, live in truth and confess our sins. Not because it’s some ritual that we’re forced to do… but because we care about our relationship with God and we want to be right with Him.

It always amazes me that God is so faithful when it comes to forgiving us. No matter where we have been or how dirty we get, He is always there to clean us up.

You ended your groups tonight asking if there is at least one person you could share this with. I know many of you are thinking about a lot more than just one. However many… don’t just read the verses, I want to encourage you to share what you experienced here tonight with them.

Let’s take a moment to thank God for His love and grace in our lives and ask Him for the courage to share what we did here tonight with at least one person.