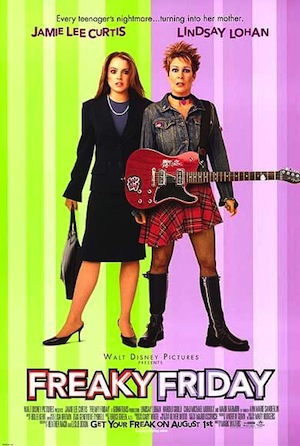 Main Point: We must be extra careful to make wise decisions when we are around the opposite sex.

Attention Grabber: Movie – Freaky Friday
This movie is about an overworked mother and her daughter who do not get along. When they switch bodies, each is forced to adapt to the other's life for one freaky Friday.

Clip: Want a ride?
We’ve all seen smart, independent-minded teenagers (both guys and girls) who get around an attractive member of the opposite sex and seem to have experienced an invisible lobotomy. Unfortunately their knack for wise choices sometimes goes AWOL with their brains. Begin the clip at about 62 minutes into Freaky Friday, Scene 8 on the DVD called “Sparks Fly”, from where the Disney castle forms. Stop after a few seconds of Tess and Jake driving down the freeway – but before the scene in Anna’s room. This is a great scene that illustrates “situational ethics with the opposite sex.”

Scene Introduction:
Today we are going to talk about relationships. Before we begin, however, we are going to watch a clip from the film Freaky Friday. In the scene, Anna, momentarily forgetting she’s in her mother Tess’s body, is flirting with Jake at the coffee shop he works at. All of a sudden, she realizes she is in her mom's body so she tells Jake she has to go. It was established earlier in the movie that Anna was not allowed to ride on a boy’s motorcycle. But now that she has her mother's body, let's see how she makes decisions.

Tess: No, no. I…have a wedding rehearsal.

Jake: Are you serious?

Jake: Hey – you’re not really getting married are you?

Tess: Please, listen, this was so fun, and I’m gonna remember it forever.

Tess: (eyes tearing) I have to go. Really, I just…

Jake: Please. Just please. Let me at least give you a ride.

Transitional Statement:
Isn't it crazy how we can be so easily influenced by the opposite sex? Sometimes, someone will turn into a totally different person, just because an attractive member of the opposite sex is around. It's like we are a bunch of werewolves. And sometimes, it feels like our judgment of right and wrong go right out the window. There's a term called “situational ethics.” Ethics are simply our idea of what right and wrong are. So situational ethics is when our view of right and wrong actually change when we're in different decisions.

Divide into Small Groups:
Right now we're going to split up into our small groups and talk about this problem with situational ethics around the opposite sex. Then afterward we’ll come back together for a final word.

(go over the concept of “situational ethics” again here; maintaining certain standards and priorities until “something’s in it for you.”)

ASK A FEW: What are ways that we show a lack of wisdom in little daily decisions that might affect big decisions later? (especially if a hottie is involved!)
Let’s look up a couple of scriptures that may help us when we’re tempted to be something we’re not next time the hotties float by. The Scriptures use the word “discretion” a couple times. This means simply wisdom in making decisions. Keep that in mind when we read these verses:

Proverbs 2:11 “Discretion will protect you, and understanding will guard you.”

Proverbs 11:22 “Like a gold ring in a pig’s snout is a beautiful woman who shows no discretion.”

WRAP UP (and closing activity):
I really want to encourage you to make a commitment to guard your heart as well as your actions around the opposite sex. Let’s pray that God will help us to be secure and be true to Him and to ourselves, no matter who’s around. Now we're going to pass out paper & pens. On this slip of paper, you can write down a first name only, initials only, or a little picture that represents someone or a certain group. But I want you to write down a few thoughts . . .

SUGGESTED HAND-OUT:
Pre-typed/copied slips of paper with the following:

Proverbs 2:11 “Discretion will protect you, and understanding will guard you.”

Allow the students time to write, and close the evening with a prayer.