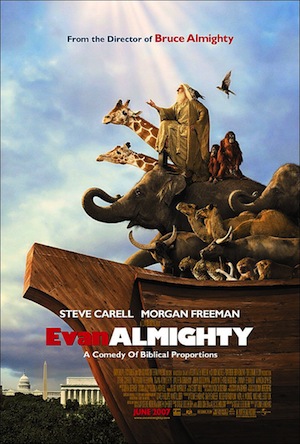 (Universal Pictures, 2007)
Main Point of Discussion: God wants to give us what is best for us and he knows our needs better than we know them ourselves. (We use this subject to open the door to sharing the Gospel and giving kids a chance to respond, trusting Jesus.)

The Movie Clip: “What would you pray for?”

Evan Almighty is a hilarious movie with several usable discussion clips. This story is about Evan (who we met first in Bruce Almighty), now leaving his job as a TV news anchorman in Buffalo, NY to become the newly elected congressman in Washington D.C. Evan’s campaign promise and slogan was to “Change the World.” Although he had his own plans to accomplish that, God (Morgan Freeman) shows up, and Evan is given the task of building an ark, just like Noah. (You can read more about this film in our movie review on this page.)

The clip we are using is early in the film (the credits are actually still rolling) when Evan decides to pray and ask for God’s help. You may want to review the clip first- some people might not be excited about Lauren Graham’s PJs (mild by today’s standards). If that is the case… those concerned could start the clip a little later when she is in bed under the covers.

Introducing the Clip:
Today I want to show you a clip from the movie, Evan Almighty. Many of you have seen this hilarious film about an ordinary guy named Evan, played by Steve Carell, who is instructed by God to build an ark. I’m going to show you a three minute clip from the very beginning of this film as the opening credits are still rolling. Evan has just moved with his family to a nice new house near Washington D.C. where he wants to “change the world” in his new role as a U.S. Senator. In this scene he and his wife Joan are going to bed and they have a conversation about prayer.

BEGIN CLIP AT 5 minutes and 30 seconds (in Chapter 2, just after the kids high five—the opening credits are still finishing).

Evan: Ladies and Gentlemen, this concludes day one of the Baxters new and exciting life. I have to do the new house dance. (begins doing a goofy little dance) Mmm-hmm.

Joan: You know, those boys were having so much fun tonight, I thought I would never get them to bed. And then Ryan did the cutest thing. He asked if we could all pray together.

Evan: (surprised) Really? What did you (all) pray about?

Joan: He met a dog. What do you think he prayed for?

Joan: … and Jordon was very precise. He prayed for good visibility, good weather on the hiking trip tomorrow.

Joan: Do you wanna know what I prayed for?

Evan: Yeah, what did you pray for?

Joan: I prayed we would become closer as a family.

Evan: Honey, you don’t need to pray for that to happen. I will make that happen.

Joan: (sighs) What would you pray for?

Evan: Me? I don’t know. Praying just… (shaking his head as if it wasn’t for him, dismissing it, sighing.)

Joan: Honey, you’re the one who said you wanted to change the world. It’s a pretty big job. If it were me, I would take all the help I could get.

(Evan thinks about her words.)

The scene changes to later that night where Evan is sitting up watching TV in bed as his wife sleeps. The news report is about Evan's campaign promise to change the world. The commentator says, “Good luck congressman. Many have tried… many have failed.” Evan turns off the TV and thinks about those words. He remembers his wife’s words and, in a last resort effort, decides to pray. He gets out of bed onto his knees.

Evan: (praying) Hello, there. Hi. This is Evan Baxter. Um… just wanted to say thank you for everything. Thank you for the new car and for the house. The house is great. I love it. I mean, I picked it out, but you created matter and everything, so… I just wanted to say that I think Joan makes a good point, and that I am now in a position of great power, and I know that with great power comes great responsibility. So, God… (ahem) …please help me change the world. Okay. That’s it. I’m hanging up now. God bless… Well, you. Okay.

(Even crawls back into bed and falls asleep.)END CLIP AT 8 minutes and 20 seconds.

Transitional Statement:
In this scene it was obvious that Evan wasn’t used to praying. But as Evan listened to his wife’s good counsel, he figured that it might not be such a bad idea. So Evan prayed what seemed like an honest prayer to God, asking Him if He would help Evan change the world. Evan was thinking about politics, but God had something better in mind.

Read the rest of that passage:

Wrap Up:
Tonight we’ve been talking about prayers and answers to prayers. And believe it or not, I think we can learn quite a bit from Evan’s prayer. Evan prayed for God to help him change the world. Evan did NOT tell God how to do it—he just asked for God’s help changing the world. Many of us probably want to see God change the world; we want to see God bring peace in our family, or school, or church, or neighborhood—but we need to trust God for how He wants to answer our prayers.

For example, we might want God to make us rich so that we can give lots to the needy. Maybe instead we need to just pray for the needs of the poor and then let God answer the prayer however He wants to. He might just open up the opportunities for us to be used by getting some tools and pain brushes to help with work instead of our money.

You see, when we pray, a lot of us try to tell God HOW to help us. We tell God, “If you just make me rich, I’ll be content.” Where, instead, if we really trust God, we should just be praying to be content and let Him take care of the details.

If you think about it, this whole discussion comes down to trust: do we really trust that God knows what’s best for us?

A lot of us in this room have made a decision at one time in our life to put our trust in Jesus. Some of us might have made that decision when we were only six or seven years old. We prayed that Jesus would forgive us for everything and we “put our trust” into Him. Some of the people in here have taken that step of faith recently. Some of us here might be considering taking that step of faith. And that’s exactly what it takes, “faith.” Because sometimes we think that our way sounds better than God’s way- that’s the definition of sin- doing it “our way” rather than “His way.” Faith in Him puts “our way” aside and trusts in “His way.”

Is there a chance that maybe some of us “told” Jesus that we were going to put our trust in Him… but never really did? We said the words, hoping that we would avoid Hell… but when it came down to either our way or God’s way… our way always wins? Is that trusting Him?

Do you really believe that He knows what’s best for you? Because if we really do trust Him, our prayers will reflect that.

God knows what’s best for us—even more than we do. We need to trust Him in that. And the good news is, He wants to give us good gifts! He has “what’s best” in store for us.

Do you trust that God knows what’s best for you?

If we do, then we need to start acting like it. One way to do that, is to put our trust in Him when we pray.

Close in Prayer – (give invitation)
Right now I want everyone to close their eyes and think about themselves and not those around you. If you are sitting here and you’re thinking, “I don’t know if I’ve ever really put my trust in God.” Maybe you said the words, but nothing happened. When it comes between “my way” or “God’s way” … my way always wins. And to make matters worse, many of you are already realizing that your own way hasn’t necessarily brought you fulfillment.

You can change all that. Stop heading your way- and start heading God’s way. That’s what Peter told thousands of people in the Bible in Acts 3:19. He said, “Repent,” which means ‘stop going your way, turn around and go God’s way.’ He said, “Repent then, and turn to God, so that your sins may be wiped out, that times of refreshing my come from the Lord. (NIV)

Some of us would like that: a refreshing new start. Your trust begins a lifelong relationship with Him.

If you’d like that relationship with God, tell Him. Ask Him to forgive your sins. If you’re willing to truly trust in Him, tell Him that you’re ready to stop going your way and start going His way.