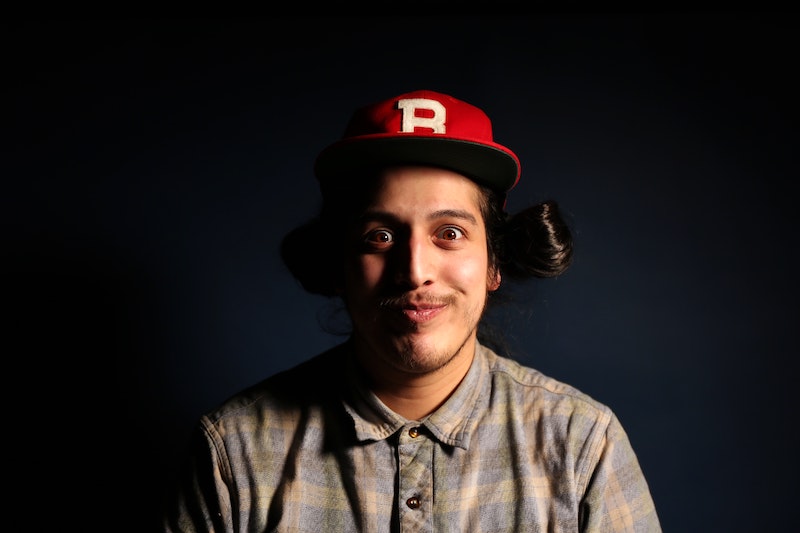 Props Needed:
A glass bottle in a paper sack (to give the illusion of alcohol)

Warning: This stupid skit is a unique one as you will see. It only requires two male actors and a very simple prop, and there is VERY limited dialogue so memorizing lines for this skit should be a breeze. However, there is a fair amount of acting, voice inflection, and body language that is required to pull this one off. In fact, this skit probably requires more acting than any other skit on our website. Just be warned, but have fun!

Dude 1: (takes the stage from the right, drinking the “beer”)

Dude 2: (takes the stage from the left and looks at Dude 1 giving him a “what are you doing?” look)

Dude 1: (pushes beer towards Dude 2 trying to get him to take some and says) “Dude?”  (voice inflection needs to be asking a question here)

Dude 2: (shakes his head and says) “Dude.”  (voice inflection here needs to be almost scoffing as if he were saying “no way!”)

Dude 1: (laughs just a little bit, pushes the beer toward Dude 2 again, and says) “Dude!”  (voice inflection here needs to be assertive, and the body language needs to be saying “lighten up some!”)

Dude 2: (puts his hands in the form of prayer and says) “Duuude.”  (voice inflection should be low and body language needs to be somber and sending the signal that says “you need some help”)

Dude 1: (waves him off in a mocking way, takes another sip, and says) “Dude!” (voice inflection needs to be excited and body language needs to communicate that everyone is doing it, and its no big deal.)

Dude 2: (makes a steeple with his hands and says) “Duuuuude.” (voice inflection is still very serious and low, and body language is communicating an invitation.)

Dude 1: (looks at what Dude 2 is doing and says) “Dude.”  (while saying dude he rubs his chin in a contemplative way, and begins to ever so slightly nod his head in a yes fashion indicating that he is seriously thinking about what Dude 2 is saying)

Dude 2: (in a very, very excited and animated way, throws his hands up in worship and says) “Dude! THE Dude! Duuuuuude. THE DUUUUUUUUUUUUDDDDDDEEE!!!!!”  (while saying this point to Dude 1 when saying dude and point up when saying the dude)

Dude 1: (has been closely listening to what Dude 2 has been saying, but seems to be worried about something so he looks at Dude 2 and then at the beer in his own hand and then back at Dude 2 and says) “But Dude?”  (voice inflection needs to be almost asking but what about this?)

Dude 2: (leans toward Dude 1 and gently tries to take the bottle covered sack away from Dude 1 and in a very reassuring way says) “Dude.”  (voice inflection should indicate a tone that tries to convince him while body language is very quiet and calm)

Dude 1: (starts to boo hoo a little bit and gets choked up, but gives Dude 2 the bottle and says) “Duu-duuu-duuude.”  (voice inflection needs to show shame and guilt and genuine remorse for his decision. The more choked up it is, the funnier it is)

Dude 2: (throws the bottle aside, makes the prayer hands to invite Dude 1 to bow his head again, and places his hands on Dude 1’s shoulders and says) “Dude?” (voice inflection and body language and facial expression need to be asking are you ready to pray now?)

Dude 1: (makes prayer hands to and begins to say) “Dude. And dude. Oh and dude! Duuuuuudddddddeee.”  (Dude 1 can say dude as many times as he wants, but his voice inflection and body movements should indicate that he is listing his sins one by one. Dude 1 should close by finally saying) “The Dude dude?”  (voice inflection and body language should be saying will you forgive me?)

Dude 2: (smiles and really excitedly says) “Dude! Dude!”  (voice inflection has to be HUGE here, and Dude 2 should be congratulating Dude 1 by patting him on the shoulders and giving him a high five)

Both: (both dudes exit the stage arm over shoulder saying dude in very excited voices with lots of expression in them)

Note: The point of this stupid skit is to show what it looks like when someone gives his life to Christ. While that is certainly a very serious topic, this skit seeks to show that in a fun way. You absolutely must choose the right two guys for this skit; if they are too reserved or too bashful, it will not look right. It’s got to be over the top in a way, while still communicating the message. Bottom line: make it as funny as possible while still getting the point across. Have fun!

Idea by Heather A.