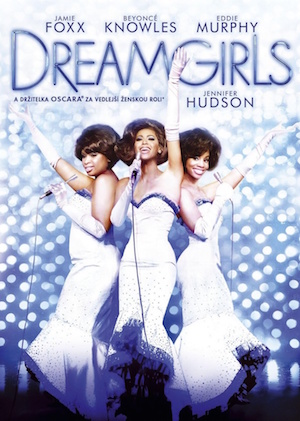 The Movie:
Dreamgirls, starring Jamie Foxx, Beyoncé Knowles, Jennifer Hudson, Eddie Murphy, Anika Noni Rose, Danny Glover, and Keith Robinson, follows the launch of The Dreams, a very talented and beautiful group of singers who are looking to make it big in the music showbiz. Set in the 60s during the height of Motown music, the girls must face their own insecurities, inner struggles, a crooked manager, and of course, the ever-changing desires of a music-purchasing populace.

The movie has plenty of huge names and is filled with lots of music that’s pretty engaging. It was rated PG-13 by the MPAA for “some obscenities and profanities, drug references, and sexual promiscuity.” However, none of those elements are found in this brief clip.

Introducing the Clip:
I want to show you a short clip from the movie Dreamgirls. It’s a film about a group of young, talented, and beautiful singers who are trying to break into the Motown music business on their own instead of continuing to be backup singers for another act. During this clip, you’re going to hear that they finally get their big break. They’re getting their own act…but it means making some changes. I want you to take a look at how the girls respond to the changes they have to make to get their own stage. Some of the changes are going to come at personal costs…and it could threaten to break them apart.

The Movie Clip:
The clip can be found online at the following link: https://www.youtube.com/watch?v=1mJ49BcUM3E

Transitional Statement:
Did you notice how the girls responded to the changes that had to be made? While they loved the idea of getting a bigger stage to sing on, it meant that certain adjustments had to be made. Some of them didn’t quite have the humility to make those adjustments. When Effie was informed that Deena would be singing lead in the new band, she got very angry and jealous because she’d been the one to always sing lead in the past. Jealousy can be a terrible thing to experience in a relationship. In fact, we should be very careful how we act when we are jealous of others…and when others are jealous of us. We’re going to look at a biblical story of jealousy in a moment that carries much more weight than “who gets to sing lead,” but the reality is the same: we should be leery of jealousy.

After David had finished talking with Saul, Jonathan became one in spirit with David, and he loved him as himself. 2 From that day Saul kept David with him and did not let him return to his father’s house. 3 And Jonathan made a covenant with David because he loved him as himself. 4 Jonathan took off the robe he was wearing and gave it to David, along with his tunic, and even his sword, his bow and his belt. 5 Whatever Saul sent him to do, David did it so successfully that Saul gave him a high rank in the army. This pleased all the people, and Saul’s officers as well. 6 When the men were returning home after David had killed the Philistine, the women came out from all the towns of Israel to meet King Saul with singing and dancing, with joyful songs and with tambourines and lutes. 7 As they danced, they sang: “Saul has slain his thousands, and David his tens of thousands.” 8 Saul was very angry; this refrain galled him. “They have credited David with tens of thousands,” he thought, “but me with only thousands. What more can he get but the kingdom?” 9 And from that time on Saul kept a jealous eye on David. 10 The next day an evil spirit from God came forcefully upon Saul. He was prophesying in his house, while David was playing the harp, as he usually did. Saul had a spear in his hand 11 and he hurled it, saying to himself, “I’ll pin David to the wall.” But David eluded him twice. 12 Saul was afraid of David, because the LORD was with David but had left Saul. 13 So he sent David away from him and gave him command over a thousand men, and David led the troops in their campaigns. 14 In everything he did he had great success, because the LORD was with him. 15 When Saul saw how successful he was, he was afraid of him. 16 But all Israel and Judah loved David, because he led them in their campaigns.


Wrap Up:
During our time together, we watched a clip about a group of friends who’d worked hard and worked together most of their lives. Their one dream was to make it big in showbiz, but when they did, jealousy stood in the way. What we learned from their story is that jealousy can cost us.

But then we looked at an even more important story, the story of King Saul and his servant, David. Saul was jealous of David because David proved to be a great warrior in Saul’s army. Umm…can you just think about how stupid that is for a moment!?!? Would King Saul rather have had David lose battles for him instead of win? I mean, isn’t winning battles the WHOLE POINT of war??? Besides that, why would a KING be jealous of his servant?

But sadly, Saul’s jealousy didn’t end with an angry post on Facebook. Nope. King Saul actually tried to kill David out of jealousy. King Saul didn’t stop with jealousy. He acted on it in an even more wicked way.

Guys, I want you to know that jealousy is a sin and nothing good ever comes from it. Whether you’re jealous of someone else, or someone else is jealous of you, nothing righteous can come from it. You need to be very, very careful to guard against jealousy.

So, if you’re jealous of someone else, then you need to pray and ask God to help you drop that junk. It will not serve you well. Jealousy will lead you down a path you don’t want to go. But, if you know that someone else is jealous of you, then you also need to take action. Lovingly and humbly go to them and ask them to deal with their jealousy. If you’re truly friends with them, you’ll want the best for them…and jealousy is never the best.

I’ve never met a person or been in a situation that was improved by jealousy. No one ever did anything great out of jealousy. So if it’s in your life, you need to deal with it immediately. Who knows what it could lead to if left unchecked!

I’m going to pray for us now, but if you want to talk more about this important topic, find one of our adult leaders after we dismiss. We’d love to help you drop the jealousy in your life.