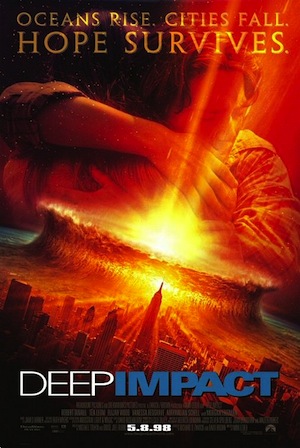 (Paramount Pictures, 1998)
Main Point: Self sacrifice is obviously difficult, but it is one of the primary ways we show the world that we are Christ followers.

In the movie, Deep Impact, a comet is headed for earth and unless it can be destroyed before colliding with it, only those allowed into shelters will survive.

Introducing the Clip:
The clip we are going to watch is from the movie Deep Impact. The plot of this movie is basically a comet that is headed for earth needs to be destroyed, so they send a space shuttle called The Messiah to intercept and destroy it. The Messiah space shuttle crew sent to destroy the comet speeding toward earth realizes that they aren't going to make it back. They all get one last chance to say goodbye to their loved ones by video communications. (FYI: One of the astronauts briefly uses h-ll in a statement, indicated below if you want to mute that line.)

Capt. ‘Fish’ Tanner: Could I bother everyone for a minute? Now, let’s take a look at the big one. Now, the outglassing has created a vent a half a mile wide and at least two miles deep. Comet gets closer to the sun, sun melts ice, ice turns to steam, we get a big hole, OK? So, how many nukes we have left in the back?

Capt. ‘Fish’ Tanner: If we can get the remaining bombs in that vent, there shouldn’t be anything left of that comet bigger than a suitcase. Now, we can’t do anything about the little one, but…you know, it just might give them a chance. (Pause) Now, without the arming codes, we’re gonna have to wait to set the bomb timers until we get closer to earth to raise Houston.

Col. Tulchinsky: We may not have enough life support left to get back into the cargo bay for the nukes, much less work down on the comet.

Mark Simon: And we sure as h—ll don’t have enough propellant left in the Messiah to maneuver with. How are we supposed to get back off the surface once we’ve gotten down there?

Andrea 'Andy' Baker: Hey, look at the bright side. We’ll all have high schools named after us.STOP after the scene changes.

Transitional Statement:
This scene is a great illustration of one of the biggest tests anyone could face, which is a life or death scenario where you have the opportunity to give your life for a greater cause.

Philippians 2:3-4
Do nothing out of selfish ambition or vain conceit, but in humility consider others better than yourselves. Each of you should look not only to your own interests, but also to the interests of others.

Philippians 2:5-11
You must have the same attitude that Christ Jesus had.

Though he was God, he did not think of equality with God as something to cling to.

Instead, he gave up his divine privileges; he took the humble position of a slave and was born as a human being.

When he appeared in human form, he humbled himself in obedience to God and died a criminal’s death on a cross.

Therefore, God elevated him to the place of highest honor and gave him the name above all other names that at the name of Jesus every knee should bow, in heaven and on earth and under the earth, and every tongue confess that Jesus Christ is Lord, to the glory of God the Father.


Wrap Up:
Most of us, if not all, will probably not face a situation where we have to give up our lives to save someone, but we are given the opportunity every day to sacrifice by considering others more important than ourselves. When we live out the truth of Philippians 2 in tangible and visible ways, we create great opportunities to share the motivation behind our attitude, which the model Jesus gave us by coming to earth and dying on the Cross. When you think about it, when we sacrifice, we open the door to share the message about the real Messiah! This week, think about some ways you could consider others more important than yourselves. It could be simple things like doing some free yard work, washing someone’s car, preparing a meal, or giving up some Facebook/MySpace time to listen to a friend who you know is struggling with someone.

Close in Prayer – (give invitation to trust Christ)

Jesus, thank you for being the ultimate sacrifice and showing us the attitude that we should have towards others. Help us to be like you, so the world can see you working through us and then desire to know you.