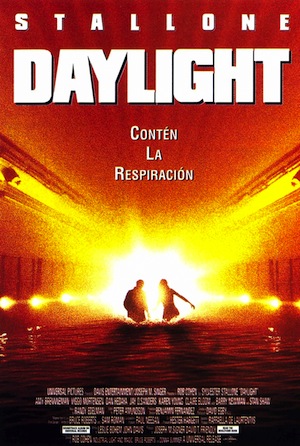 (Universal Pictures, 1996)
Main Point: If Jesus doesn’t “look like” the Messiah, is He really the Messiah?

Sylvester Stallone was THE action movie star in the 1990’s “no if’s, and’s, or but’s.” Daylight was just one of the movies where ‘The Italian Stallion’ rode into town and saved the day. In this film, Kit Latura (Stallone) is a disgraced EMS chief in New York City who happens to be in the right place at the right time to save a bunch of people trapped in a commuter tunnel 100 feet under the Hudson River…with water rushing in!

Introducing the Clip:
Alright, anybody who knows the actor, Sylvester Stallone, knows that he’s famous for saving the day, right? He always captures the bad guy and saves the girl, while blowing something up, just before the credits roll. But in this scene I want to show you from the movie Daylight, even though Stallone’s character is the hero – and he blows something up – he gets a less-than-desirable welcome when he shows up to save a bunch of people who are trapped in an underground commuter tunnel during rush hour with water from the Hudson River quickly flooding the tunnel. Let’s take a look at everyone’s reaction.

You can begin the scene anywhere. I like to start around 41 minutes into the film when they shut down the four fans for Kit. The fans don’t stop immediately because of momentum. Kit slows them down enough to slip through. Then Kit begins maneuvering his way through giant fans to get to the underground tunnel. This intense scene goes on without dialogue, until an explosion rocks Kit and he emerges from the rubble, panting and holding his ear because of the pain, where he finds the trapped people.

Mother: Where are the rest?

Old Woman: There can’t be only one.

Mother: There has to be some more!

Background Voice: Tell me this is not happening.

Background Voice: Are we gonna get out?

Transitional Statement:
I bet Kit is really glad that he just risked his life for THESE people, huh?!! (sarcasm implied)

This video clip showed what it looks like when a bunch of people don’t like the looks of their rescuer.

The people trapped underground already had a preconceived notion of what their savior would look like, and Kit just didn’t match their profile. What’s interesting is, Kit wasn’t the first Person to risk His life trying to save people, only to have those same people reject Him and question Him. The same thing happened to Jesus, too.

John 7:25-44 (NIV)
25At that point some of the people of Jerusalem began to ask, “Isn't this the man they are trying to kill? 26Here he is, speaking publicly, and they are not saying a word to him. Have the authorities really concluded that he is the Christ? 27But we know where this man is from; when the Christ comes, no one will know where he is from.”

28Then Jesus, still teaching in the temple courts, cried out, “Yes, you know me, and you know where I am from. I am not here on my own, but he who sent me is true. You do not know him, 29but I know him because I am from him and he sent me.”

30At this they tried to seize him, but no one laid a hand on him, because his time had not yet come. 31Still, many in the crowd put their faith in him. They said, “When the Christ comes, will he do more miraculous signs than this man?”

32The Pharisees heard the crowd whispering such things about him. Then the chief priests and the Pharisees sent temple guards to arrest him.

33Jesus said, “I am with you for only a short time, and then I go to the one who sent me. 34You will look for me, but you will not find me; and where I am, you cannot come.”

35The Jews said to one another, “Where does this man intend to go that we cannot find him? Will he go where our people live scattered among the Greeks, and teach the Greeks? 36What did he mean when he said, 'You will look for me, but you will not find me,' and 'Where I am, you cannot come'?”

37On the last and greatest day of the Feast, Jesus stood and said in a loud voice, “If anyone is thirsty, let him come to me and drink. 38Whoever believes in me, as the Scripture has said, streams of living water will flow from within him.” 39By this he meant the Spirit, whom those who believed in him were later to receive. Up to that time the Spirit had not been given, since Jesus had not yet been glorified.

40On hearing his words, some of the people said, “Surely this man is the Prophet.”

Still others asked, “How can the Christ come from Galilee? 42Does not the Scripture say that the Christ will come from David's family and from Bethlehem, the town where David lived?” 43Thus the people were divided because of Jesus. 44Some wanted to seize him, but no one laid a hand on him.

Who Is Jesus?
Hand out note cards and pens to every student.

Give the students about 4 minutes to complete this exercise. Continue with the last question ONLY AFTER everyone has completed their note card.


Wrap Up
Tonight we watched a clip from a movie about a guy who risked his life to help save some complete strangers, and instead of thanking him, they pretty much just dissed him. But, he didn’t let their reaction to him deter him from trying to save them.

Then we read about an account from Jesus’ life where much the same thing happened. We’ve heard the story of Jesus a lot of times, but the people living during Jesus’ time had not. Some people believed Jesus was the actual Messiah, but some didn’t believe that Jesus was the Messiah. The people who didn’t believe in Jesus as the Savior of the world thought they had a pretty good reason to not believe…after all, what could just one Person do?

But, in the end, these people who didn’t believe in Jesus were still wrong. You see, they wanted somebody to save them from the Roman oppressors who were living in their land. They wanted somebody with an army to come riding into town and cleaning house, so to speak. But when they saw Jesus, who was basically a “nobody carpenter,” they thought, “There’s no way this could be the guy who’s coming to save us.”

But Jesus didn’t get mad at them for not believing. In fact, He just continued on with His rescue plan. The passage we read tonight said that Jesus stood up at the feast and proclaimed in a loud voice, “If anyone is thirsty, let him come to me and drink. Whoever believes in me, as the Scripture has said, streams of living water will flow from within him.”

So, right before we left our small groups, we each wrote down who and what we believe Jesus is. Relax, I’m not gonna ask to see what you wrote, but I hope you gave it some serious thought. I believe He was more than a good guy or a profound teacher or a nice person. Even Jesus himself claimed to be so much more. He said, “I and the Father are one” and He told Peter that he was correct in saying that Jesus was the Messiah. I’m not sure what you each wrote down on your papers or who you think Jesus is. I believe He is the “Savior of the World,” “Lord of the Universe,” the “One and Only Son of God” and my “Personal Savior.”

Listen, that’s our time tonight. But this is important stuff, so if you wanna hang out a little longer and talk about this some more, we totally welcome that. You can grab me or one of these adult leaders around the room, and we’d be happy to talk with you farther.