Day the Earth Stood Still, The 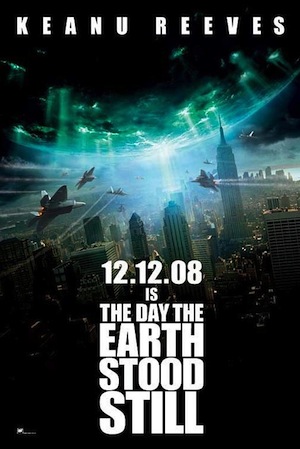 (2008, 20th Century FOX)
Main Point: The sin of mankind is obvious to the onlooker. Some might say that we aren’t even worthy of redemption. But God, in his great love for us, has chosen to save us!

The Movie Clip: “They Are a Destructive Race”
Scott Derrickson’s remake of the 1951 sci-fi classic The Day the Earth Stood Still used a life and death situation to paint a grim picture of humanity and its fate. According to the storyline, humans have been under observation for a long time by alien life forms who are far more advanced. The aliens have judged humans unworthy of life because of the destruction they bring to each other, and more importantly, the life-giving planet. Thus, the humans will have to be destroyed so that the planet can continue to live and give life.

The clip that will be used in this small group discussion shows a conversation between two aliens who have observed humans, experienced their arrogance and destruction, and will ultimately decide their fate.

Introducing the Clip:
You may have seen the movie, The Day the Earth Stood Still, but if not, just know it was another sci-fi movie about aliens destroying humans. However, in this film, the aliens didn’t want to overrun and invade planet Earth, nor abduct humans for experimental purposes. Instead, the aliens decided that humans had to die because of how detrimental they were to each other and the planet. After decades and decades of observing human atrocities, the aliens decided that humans must die so the life-giving planet could live. Let’s take a look at how other life forms might view us today.

(Scene opens in a McDonalds)

(Grandson leaves the tea and walks over to sit down with Dr. Benson)

Dr. Benson: Are you one of them?

Grandson: One of who?

Klaatu: You’ve been out of contact for a long time.

Mr. Wu: I had a dangerous assignment. This is hostile territory.

Klaatu: I’ve noticed. I was hoping I could reason with them.

Mr. Wu: I’m afraid they are not a reasonable race. I’ve been living amongst them for 70 years now. I know them well.

Mr. Wu: Any attempt to intercede with them would be futile. They are destructive, and they won’t change.

Klaatu: Is that your official report?

Mr. Wu: The tragedy is, they know what’s going to become of them. They sense it. But they can’t seem to do anything about it.

Klaatu: It’s decided then. I’ll begin the process as soon as possible. We should make preparations for our departure.

Klaatu: If you stay, you’ll die.

Klaatu: You yourself called them a destructive race.

Mr. Wu: That’s true. But still, there is another side. You see, I love them. This is a very strange thing…I can’t find a way to explain it to you. For many years, I cursed my luck for being sent here. Human life is…difficult. But if this life is coming to an end, I consider myself lucky to have lived it. END CLIP AT 53 minutes and 54 seconds

Transitional Statement:
Wow! Those two aliens painted a fairly grim picture of us, didn’t they? In trying to describe us, they used some really bleak language. In the end, they decided we must die. What’s ironic is this: the Bible also paints a grim picture of humans. However, instead of God destroying us, we’re told that He does something far more unexpected…He gives us new life! Let’s spend the next few minutes talking about that.

10 As the Scriptures say, “No one is righteous—not even one. 11 No one is truly wise; no one is seeking God. 12 All have turned away; all have become useless. No one does good, not a single one. 13 Their talk is foul, like the stench from an open grave. Their tongues are filled with lies. Snake venom drips from their lips. 14 Their mouths are full of cursing and bitterness. 15 They rush to commit murder. 16 Destruction and misery always follow them. 17 They don’t know where to find peace. 18 They have no fear of God at all.”

19 Obviously, the law applies to those to whom it was given, for its purpose is to keep people from having excuses, and to show that the entire world is guilty before God. 20 For no one can ever be made right with God by doing what the law commands. The law simply shows us how sinful we are.

21 But now God has shown us a way to be made right with him without keeping the requirements of the law, as was promised in the writings of Moses and the prophets long ago. 22 We are made right with God by placing our faith in Jesus Christ. And this is true for everyone who believes, no matter who we are.

23For everyone has sinned; we all fall short of God’s glorious standard. 24 Yet God, with undeserved kindness, declares that we are righteous. He did this through Christ Jesus when he freed us from the penalty for our sins. 25 For God presented Jesus as the sacrifice for sin. People are made right with God when they believe that Jesus sacrificed his life, shedding his blood.


Wrap Up:
Tonight we saw a clip from a movie where a couple of aliens basically called all of us evil, nasty creatures who were incapable of ever changing. Then we had to listen to them plot our death. That was a little tough to hear.

And if that wasn’t bad enough, we then read a passage from God’s Word that seemed to agree with the aliens’ verdict. But there was a big difference between what the aliens wanted to do with us, and what God wants to do with us.

Because of our wickedness and destruction, the aliens wanted to destroy us. To tell you the truth, we probably deserve it.

Because of our sinfulness, God could destroy us, and we would definitely deserve it.

But, God didn’t destroy us! Instead, He sent His Son Jesus to “make us right with Him,” so we could enjoy a relationship with God and escape the penalty of our sin. Honestly, we don’t deserve any of that. After all, we’re all sinners!

The Bible says that God showed us “undeserved kindness.” I’ll take that any day over being destroyed!

But, there is one detail that we can’t afford to overlook. The Bible also says we must “believe that Jesus sacrificed Himself, shedding His blood, for us.” If we don’t do that, we haven’t been made right with God. Only through faith and trust in Jesus can we be made right with God.

If you’ve never put your faith and trust in Jesus, you can do that tonight. I invite you to talk with any of our adult leaders before you leave tonight, so they can help you do just that.