Day After Tomorrow, The 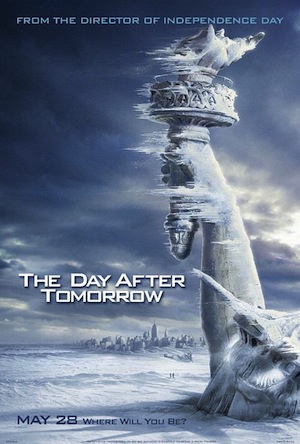 Main Point: We must not be ashamed of telling people the truth.

This movie is basically about global shift in the earth’s climate as a result of global warming, which results in catastrophic weather all over the world. People must flee toward the equator, in order to avoid freezing to death in the northern parts. This is a great movie and is very clean, as long as you can handle death on a global scale.

Clip: We must not go out into the storm
If you’re using a DVD player the clip can begin at the beginning of chapter 19, or if you’re using a VCR with a counter, the time (if you begin the counter at the Twentieth Century Fox logo) to start is about 1:08:05 or so. It ends almost three minutes later at 1:10:57. The clip features Sam, whose father is a climatologist (Dennis Quaid), who has told Sam that the storm will soon be strong enough to freeze everyone to death. They must stay indoors. In the scene, Sam musters up the courage to try stopping the people who are stuck inside from venturing out into the storm. Most do not believe what he says so they leave anyway. The scene ends with people walking past Sam and out into the storm.

Scene Introduction:
Have you ever been in a situation when you wanted to tell someone the truth about themselves, but you were afraid that they wouldn't believe you or that they would laugh at you? It gets really frustrating when you are the only one who knows the truth. But sometimes, it may actually be our responsibility to share the truth. Let's watch a scene from a movie called “The Day After Tomorrow” about a young man who is the only one who knows that truth. In the scene, there is a horrible storm outside, and some people are stuck in a library. They want to venture outside, but Sam knows that the storm is only going to get worse. Let's see what happens.

HOMELESS MAN: Hey man, there’s people out there. I was walking my dog. There’s hundreds of them. They’re walking on the snow!

MAN 1: Where are they all going?

MAN 2: Getting out of the city before it’s too late.

SECURITY GUARD: Alright everybody, quiet down. When was the last time anybody got a signal on a cell phone?

WOMAN 1: I got through to my cousin in Memphis an hour ago. They’re being evacuated to the south.

SECURITY GUARD: We should get moving too. The water’s frozen over enough to walk on. We should get going before the snow gets too deep. Everyone, grab yourselves up as fast as you can.

JD: Why not Sam? Everyone is leaving.

SAM: When I talked to my dad, he told me we should stay inside. The storm will kill anybody caught in it.

MARA: Then you have to say something.

SAM: I know. (walks over to SECURITY GUARD) Excuse me, sir, you’re making a big mistake.

SECURITY GUARD: Hey listen, son, we’re all scared here, but we got no choice.

SECURITY GUARD: Get ready to go.

SAM: If these people go outside, they will freeze to death!

SECURITY GUARD: Okay, what is this nonsense?

SAM: It’s not nonsense, alright? Look, this storm is going to get worse. And the people who are caught outside, they will freeze to death.

MAN 3: Where are you getting this information?

SAM: My father’s a climatologist. He works for the government.

MAN 3: So what are you suggesting we do?

SAM: We stay inside, we keep warm, and we wait it out.

SECURITY GUARD: The snow’s getting deeper by the minute. We’ll be trapped here without food, supplies…

SECURITY GUARD: Come on, everybody.

SAM: Just one second. (everyone is leaving, SAM is desperately pleading with them) The storm is going to get bad. It’s going to get really, really bad. You’re not going to be able to survive it. Sir, please just stay. Just stay. No, just, don’t… (some stay, but most people exit)

Transitional Statement:
For Sam, telling the truth was a matter of life and death. It may sometimes be more important than we think to tell people the truth. For those of us who know who Christ is and what He did for us, we are the ones who know what the truth is. Let's talk about this truth and what it means to have this truth.

John 14:6
Jesus answered, “I am the way, the truth, and the life. No one comes to the Father except through me.”

2 Timothy 1:7-9a
For God did not give us a spirit of timidity, but a spirit of power, of love, and of self-discipline. So do not be ashamed to testify about our Lord, or ashamed of me his prisoner. But join with me in suffering for the gospel, by the power of God, who has saved us and called us to a holy life—not because of anything we have done but because of his own purpose and grace. 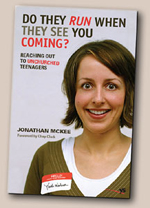 NOTE: Be careful NOT to interpret this discussion as “WE NEED TO SHOVE THE BIBLE DOWN THEIR THROATS!” There is a balance between confrontational evangelism and lifestyle evangelism that is often hard to attain. Jonathan gives great insight about this balance in his book DO THEY RUN WHEN THEY SEE YOU COMING? (CLICK HERE for more about that book)