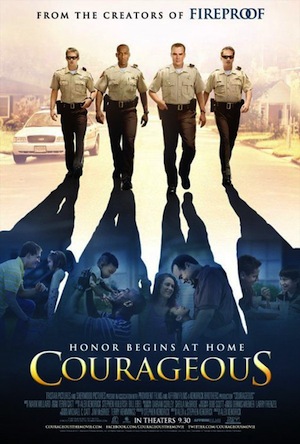 Main Point: We have to take responsibility for our actions, even our sinful actions.

The Movie Clip: You are guilty
Courageous is the fourth and latest offering from Sherwood Pictures, the movie company based out of Sherwood Baptist Church in Albany, GA. In their latest installment, the action-packed plot centers on four law officers who share two callings: to protect and serve, and to be courageous fathers.

But when tragedy strikes close to home, these four fathers’ hopes are tested, and they each wrestle with fear mixed with a little hope and faith. From their struggle comes the decision to take their responsibility as fathers more seriously; it will be a decision that deeply impacts them and their families.

Introducing the Clip:
Courageous is a movie about four cops who are also dads. Throughout the movie, what they learn is that it takes as much courage to be a father as it does to be an officer of the law. So, they challenge one another to be better fathers. It’s this life-changing challenge that prompts a life-changing conversation between two of the officers, David and Nathan. Take a close look at what David confides into his older partner Nathan, and then listen closely to what Nathan has to say to him.

Show the Clip:
(This clip is available from WingClips.com)

Luke 19:1-10 (NIV)
Jesus entered Jericho and was passing through. A man was there by the name of Zacchaeus; he was a chief tax collector and was wealthy. He wanted to see who Jesus was, but being a short man he could not, because of the crowd. So he ran ahead and climbed a sycamore-fig tree to see him, since Jesus was coming that way. When Jesus reached the spot, he looked up and said to him, “Zacchaeus, come down immediately. I must stay at your house today.” So he came down at once and welcomed him gladly. All the people saw this and began to mutter, “He has gone to be the guest of a ‘sinner.'” But Zacchaeus stood up and said to the Lord, “Look, Lord! Here and now I give half of my possessions to the poor, and if I have cheated anybody out of anything, I will pay back four times the amount.” Jesus said to him, “Today salvation has come to this house, because this man, too, is a son of Abraham. For the Son of Man came to seek and to save what was lost.”

Wrap Up:
Hopefully, this was as powerful a time for you as it was for me. I need to be reminded of the fact that we have to take responsibility for our actions, good or bad. If we are Christians, our actions must line up with our beliefs.

As we close, let me give you just a few reasons why taking responsibility for our actions is so important.

First, it’s just the right thing to do. Nuff said?

Second, it shows others that we really mean what we say. When Zacchaeus gave back the money he had stolen – plus some! – the people in the town of Jericho knew that Zacchaeus meant what he said. The same is true for you. When you take responsibility for your actions, others will begin to trust you more. It will also help them trust God more, because….

Third, when we take responsibility for our actions, it brings God glory. We get to show Him as a faithful God who is willing to forgive us and use even our difficult circumstances as an opportunity for good. People will see that God can do all things. People may even turn their lives over to God because we finally take responsibility.

Like I said, it isn’t easy to take responsibility, but it’s the best thing to do. I’d encourage you to seriously consider doing that immediately, if necessary. But you don’t have to do it alone. If you need help with something in your life, talk with one of our leaders before you leave. You’ll be glad you did.