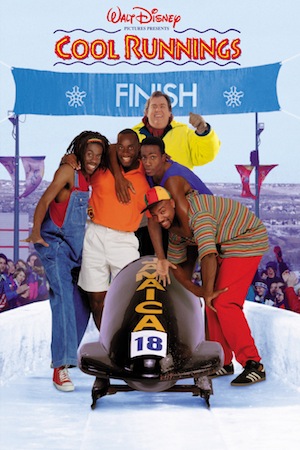 (Disney, 1993)
Main Point: If we want the crown that Jesus has prepared for us, we must finish the race marked out for our lives…no matter the setbacks.

The Movie Clip: I Have to Finish the Race
Cool Runnings was one of Disney’s best movies, and though it was released in 1993, it’s still a great flick to watch with the family (even if you have to toss a VHS tape into a VCR to do so!). The comedy starring John Candy and Doug E. Doug showcases the first bobsledding team that Jamaica entered into the Olympics at Calgary in 1988.

Jamaica is a country that’s known for their runners, like today’s Usain Bolt…and their distinct absence of snow and ice, something that’s required for bobsledding. Those two realities make for great laughs when a few island guys (some runners and one push cart junkie) jump into a bobsled for the first time together.

The film is rated PG and only has incidental language in it, and nothing of a suggestive nature. The scene used for this discussion is taken from the very end where the team is on the brink of winning a medal, and crash, ultimately losing out on everything.

Introducing the Clip:
Truth be told, the movie I’m about to show you was made before any of you were born. But it’s one of the classics from the life of comedian John Candy. Released in 1993, Cool Runnings was loosely based on Jamaica’s first-ever bobsled team. If you know anything about Jamaica, mon, you know dat it’s got no snow! That’s what makes this movie so great. It combines four guys from the island (three runners and one push cart junkie) with one washed up coach to form an improbable team that actually competed at the 1988 Winter Olympics in Calgary. The clip I want to show you comes from the very end of the movie. In their last downhill run, Jamaica’s team has a chance to actually win a medal in their very first Olympic showing. Take a look at what happens, on the track, and in their hearts.

(This clip is over 5 minutes long, so this will not be a verbatim script; it will include the highpoints of the scene, along with key dialogue.)

The announcers welcome us to the final day of the 1988 Winter Olympics. They tell us that the Jamaican team is in the unlikely spot of being able to possibly win a medal in their very first showing at the Olympics.

The team then gets ready to launch down the track on their final run of the competition. If they do well, they will win a medal. Of course, they could also crash and risk death.

The camera follows the lightning fast bobsled as it descends the hill with the four man crew inside. As the driver gently guides the old sled down the course, we see a bolt and nut coming loose. Over time, it comes totally free and causes the bobsled to lose control.

The team upends during a dangerous turn and crashes on their side. For several perilous moments, they skid to a stop on the sides of their helmeted heads. When it finally comes to a stop, Sanka asks Derice if he’s dead.

Derice: No mon. I’m not dead. (He takes off his helmet.) I have to finish the race.

As rescue crews continue to race toward them ready to provide emergency aid, an unlikely thing happens. The Jamaicans pick up their bobsled and carry it to the finish line. Along the way, the fans, and even their rivals, begin to clap for them.

After many painful steps, they finally cross the finish line.

Transitional Statement:
What a gut wrenching scene this is. Can you imagine the work these guys have put in trying to become Olympic athletes only to have their dreams crushed at the last possible moment? Three of these guys were originally competing as runners in the Olympics, but were eliminated during the final qualifying race because of an on course accident. The bobsled was their last chance to be medal winners…and we see how that turned out. But in spite of the heartbreak and suffering, Derice, the team leader, told his squad that they were going to finish the race. That’s how it is in our walk with Jesus. We don’t have to be a gold medal winner, we just need to finish the race He has laid out before us. That’s the only way to win the crown He has in store for us. Let’s spend the next few minutes talking about the race we’re in.

In the presence of God and of Christ Jesus, who will judge the living and the dead, and in view of his appearing and his kingdom, I give you this charge: 2 Preach the Word; be prepared in season and out of season; correct, rebuke and encourage– with great patience and careful instruction. 3 For the time will come when men will not put up with sound doctrine. Instead, to suit their own desires, they will gather around them a great number of teachers to say what their itching ears want to hear. 4 They will turn their ears away from the truth and turn aside to myths. 5 But you, keep your head in all situations, endure hardship, do the work of an evangelist, discharge all the duties of your ministry. 6 For I am already being poured out like a drink offering, and the time has come for my departure. 7 I have fought the good fight, I have finished the race, I have kept the faith. 8 Now there is in store for me the crown of righteousness, which the Lord, the righteous Judge, will award to me on that day– and not only to me, but also to all who have longed for his appearing.

Wrap Up:
Cool Runnings will always be one of my favorite movies because it reminds me of an important truth in my life: the race I’m running with Jesus Christ is the most important endeavor I’ve ever embarked upon. If I never make millions of dollars, but finish this race, I’m fine. If I never become President of the United States, but cross that line at the end, I’m OK. If I never have anything named after me on Earth, but get my name inscribed on the crown Jesus has planned for me, I will have accomplished my life’s goal.

The same is true for you.

I hope that you have the resolve of the Apostle Paul and Derice. In spite of all they suffered, and in spite of all the heartache they endured, they both went on to finish their respective races. One was in the Olympics; the other was in the Heavens.

Finishing this race is the most important aspect of your life. This race that you’re on as a believer in Jesus is a symbolic way of understanding our relationship with Him. We don’t have to be the next Billy Graham or Mark Driscoll or Matt Chandler or Andy Stanley (or whichever Christian you look up to). You just have to finish the race. You can come in 2nd, 17th or dead last, but you have to finish!

I know the course isn’t an easy one. I know that there are bumps and hurdles along the way. You may even face some of the suffering and heartache that Paul and Derice faced. But do what they did: get up, and finish the race. That’s the only way to get the crown Jesus has in store for you. That crown is worth everything negative we face here.

So, as we close our time together, let’s pray for one another in the races we’re running. We’re not just running our race with Jesus, we’re running it with one another, as well. We might as well help each other! I want everyone to partner up in groups of 4 and share a few concerns you have about your race. Then, ask someone in your group to pray for you. Each of you take the time to do this for each other.

(Leaders – Give them ample time to do this.)

If you think you still need some more help, or some godly counsel, about how to run your race, hang back for a moment and talk with some of our adult leaders. Hey, even the guys in Cool Runnings had a coach to look to. So, if you need some coaching, grab one of us after we close in prayer.