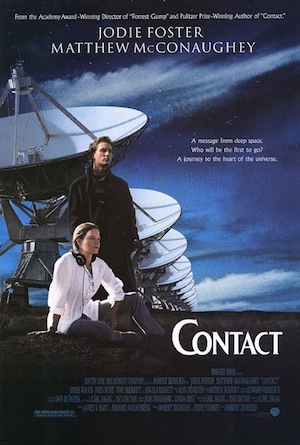 (Warner Brothers, 1997)
Main Point of Discussion: We must keep our faith strong, even when the people around us may not understand or agree with us.

The Movie Clip: “Only by Faith”

Contact is a Sci-Fi movie that tells the story of Dr. Ellie Arroway (Jodie Foster) and her discovery of a signal being broadcast from deep space. The signal contains the blueprints for building a very special machine. Even after human scientists take the time, money, and energy to build the machine, they still do not know what it does. Wanting to know what the machine is for, Dr. Arroway musters the courage to use the machine first, and has an incredible experience, traveling through time and the universe. However, during her trip on the machine, no time passed on earth.

Introducing the Clip:
Today I want to show you a clip from the Sci-Fi movie, Contact. Humans have intercepted and deciphered signals sent from deep space that gave instructions on how to build an elaborate, but unrecognizable machine. Dr. Ellie Arroway desperately wants to find out what the machine does, so she volunteers to experience it first. After years of work, billions and billions of dollars, and even the loss of human life in the course of the project, she takes an intense trip on the machine. However, while she is gone, no time passed on earth at all. Not even a second! Now Dr. Arroway has to sit before a congressional committee and attempt to explain how she can believe she experienced what she claimed happened without any evidence to prove her story. Listen to what she has to say for herself.

Congressional Interviewer: Dr. Arroway. You come to us with no evidence, no record, no artifacts, only a story that, to put it mildly, strains credibility. Over half a trillion dollars was spent. Dozens of lives were lost. Are you really going to sit there and tell us we should just take this all on faith?

Dr. Arroway: Is it possible that it didn’t happen? Yes. As a scientist I must concede that. I must volunteer that.

Kitz: Wait a minute! Let me get this straight. You admit that you have absolutely no physical evidence to back up your story?

Kitz: You admit that you very well may have hallucinated this whole thing?

Kitz: You admit that if you were in our position you would respond with exactly the same degree of incredulity and skepticism?

Kitz: Then why don’t you simply withdraw your testimony and concede that this journey to the center of the galaxy, in fact, never took place?

Dr. Arroway: Because I can’t. (crowds mumble) I had an experience. I can’t prove it. I can’t even explain it. But everything that I know as a human being, everything that I am tells me that it was real. I was given something wonderful, something that changed me forever. A vision of the universe that tells us undeniably how tiny and insignificant and how rare and precious we all are. A vision that tells us that we belong to something greater than ourselves. That we are not – none of us! – are alone. I wish I could share that. I wish that everyone, if even for one moment, could feel that awe and humility and hope. But, that continues to be my wish. END CLIP AT 2 hours 15 minutes and 58 seconds.

Transitional Statement:
I think it’s safe to say that in this moment, Dr. Arroway found out what it’s like to be a Christian sometimes. She had to explain a powerful experience – that was real! – to so many others who have never experienced what she experienced. Her experience was real; she wasn’t lying. But she had ZERO proof of her encounters, her vision, and her story. She was a scientist who all of a sudden had to live her life by faith based on this life-changing moment. In some ways, you and I are just like her.

Hebrews 11:1-13 (NIV)
1Now faith is being sure of what we hope for and certain of what we do not see. 2This is what the ancients were commended for.

3By faith we understand that the universe was formed at God's command, so that what is seen was not made out of what was visible. 4By faith Abel offered God a better sacrifice than Cain did. By faith he was commended as a righteous man, when God spoke well of his offerings. And by faith he still speaks, even though he is dead.
5By faith Enoch was taken from this life, so that he did not experience death; he could not be found, because God had taken him away. For before he was taken, he was commended as one who pleased God. 6And without faith it is impossible to please God, because anyone who comes to him must believe that he exists and that he rewards those who earnestly seek him.

7By faith Noah, when warned about things not yet seen, in holy fear built an ark to save his family. By his faith he condemned the world and became heir of the righteousness that comes by faith.

8By faith Abraham, when called to go to a place he would later receive as his inheritance, obeyed and went, even though he did not know where he was going. 9By faith he made his home in the promised land like a stranger in a foreign country; he lived in tents, as did Isaac and Jacob, who were heirs with him of the same promise. 10For he was looking forward to the city with foundations, whose architect and builder is God.

11By faith Abraham, even though he was past age—and Sarah herself was barren—was enabled to become a father because he[a]considered him faithful who had made the promise. 12And so from this one man, and he as good as dead, came descendants as numerous as the stars in the sky and as countless as the sand on the seashore.

13All these people were still living by faith when they died. They did not receive the things promised; they only saw them and welcomed them from a distance. And they admitted that they were aliens and strangers on earth.

Hebrews 10:23
“Let us hold unswervingly to the hope we profess, for he who promised is faithful.”

Wrap-UP:
Tonight we watched a clip about a woman who had to defend what she believed – in the face of HUGE skepticism – and nobody on earth seemed to agree with her. She talked about her experiences and her visions, but no one else had experienced them, so it was a tough sell. Sometimes, being a Christian is like that. We have experienced the love and forgiveness of God which TOTALLY changes our lives…but if other people haven’t also experienced God’s love, we might have a tough time explaining what has happened to us.

We also read the accounts of some very famous believers in the Bible, including Abel, Noah, and Abraham. If we know their stories, we can understand how difficult it was for them to be people of faith. I mean, Noah had to explain the concept of rain to people who had never seen rain before. Can you imagine that? And on top of explaining rain, he had to explain that it was gonna rain so much that everybody was going to die! That took some faith!!!

So, faith is a difficult thing to talk about sometimes, isn't it? But, we MUST remember that we have faith in God, and He will never abandon us, even if no one believes us. It doesn't matter what people think, it doesn't even matter whether they understand us or believe what we believe. Our faith is in something and Someone that is real though, unseen.

I don’t know if you are aware of this, but you can actually ask God to increase your faith. The disciples of Jesus did that in Luke 17:5. They just asked Jesus to increase their faith. If you are anything like them, and you probably are from time to time, you might need a little extra faith to press on. Just ask God to reveal Himself to you so you can keep the faith and remain faithful to Him.