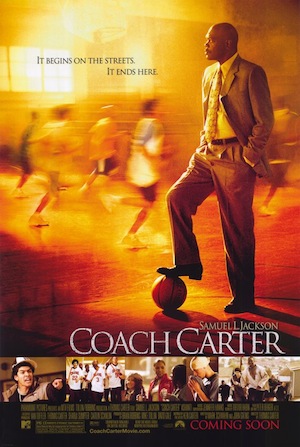 The Movie Clip: I’ll Do Pushups For Him
Coach Carter is one of the rare films that makes solid biblical points throughout its captivating and engaging storyline. The movie re-tells the legacy of Coach Ken Carter, a high school basketball player-turned high school basketball coach, who leads the ruffians of Richmond High School’s boys basketball team.

Knowing how tough and dangerous Richmond High could be – after all, he played there as a kid – Coach Carter implements several high standards (that are also controversial) to help his boys not only win on the courts, but in life, as well. Coach Carter’s integrity and work ethic eventually rub off on his team, and they experience something they’ve never known before: teamwork.

Introducing the Clip:
The movie Coach Carter is a few years old, but it’s just too good of a movie not to show even today. Coach Carter, played by Samuel L. Jackson, is the leader of the boys’ basketball team at Richmond High School. It’s a tough place to coach, as Carter learns at his very first practice. He is physically assaulted by one of his players named Cruz, and Coach Carter kicks him off the team. Later, Cruz humbly returns and asks Coach Carter what he has to do to play. Coach Carter tells him he must do 1000 suicides and 2500 pushups as penance…by Friday. Well, it’s Friday; let’s see how Cruz has done.

OPTIONAL: If you have the ability (and time) you may want to edit/splice several scenes together to make this clip even more powerful. First, get the clip where Carter is introduced to the team, and Cruz violently swings at him. Then add the scene where Cruz humbly comes back in to ask what he must do to re-join the team. Finally, show this clip below, where Coach Carter tells him he’s come up short.

BEGIN CLIP AT 0 HOURS 40 MINTUES AND 57 SECONDS. Or this clip is available to download and purchase from WingClips.

Carter: Bring it in guys! Hustle up! Alright, that’s it for today. You have a game tomorrow, so get some rest, tonight. Remember, ties and jackets tomorrow. Clyde. (Clyde walks over with the tab sheet on Cruz’s pushups and suicides. He points out that Cruz hasn’t completed the necessary number of pushups or suicides to be put back on the team. Carter walks over to where Cruz is gasping for air from having done so many sprints.) Mr. Cruz, I’m impressed with what you’ve done…but you came up short. You owe me 80 suicides and 500 pushups. Please leave my gym. (Carter walks back over to the rest of the group.) Thanks Clyde. Gentlemen, see you tomorrow.

Lyle: I’ll do pushups for him. You said we’re a team. One person struggles, we all struggle. One player triumphs, we all triumph, right? (He tosses Cruz the ball and drops to do pushups.)

Kenyon: I’ll do some. I’ll run suicides, too.

Carter: Clyde, keep count. Call me when they’re done. (Coach Carter then exits the gym while the guys continue to do pushups and sprints.)END CLIP AT 0 HOURS 43 MINUTES AND 25 SECONDS

Transitional Statement:
Nobody likes pushups. NOBODY likes suicides! But the team was willing to help out Cruz’s shortcomings so he could play basketball with them. I love what Jason Lyle said in the clip: “You said we’re a team. One person struggles, we all struggle. One player triumphs, we all triumph, right?” He’s absolutely correct. But Lyle’s not right because he’s quoting Coach Carter. He’s right because he’s quoting Scripture.

But in fact God has arranged the parts in the body, every one of them, just as he wanted them to be. 19 If they were all one part, where would the body be? 20 As it is, there are many parts, but one body. 21 The eye cannot say to the hand, “I don’t need you!” And the head cannot say to the feet, “I don’t need you!” 22 On the contrary, those parts of the body that seem to be weaker are indispensable, 23 and the parts that we think are less honorable we treat with special honor. And the parts that are unpresentable are treated with special modesty, 24 while our presentable parts need no special treatment. But God has combined the members of the body and has given greater honor to the parts that lacked it, 25 so that there should be no division in the body, but that its parts should have equal concern for each other. 26 If one part suffers, every part suffers with it; if one part is honored, every part rejoices with it. 27 Now you are the body of Christ, and each one of you is a part of it.

Wrap Up:
The scene from Coach Carter will be timeless for two reasons: first, it’s just a great scene where others willingly choose to suffer with a friend, but two, because it’s the beauty of Scripture ringing true again. The greatest people among us know that they have to suffer when we suffer and rejoice when we rejoice. That’s been true for ages; it will remain true all of your lifetime.

It’s not easy to do. When others suffer, it’s easier to just brush them aside, tell them they’ve finally gotten what they deserve, laugh at them, or give them empty promises of assurance. It’s also difficult to rejoice with those around us who are triumphant. It’s much easier to become jealous or envious, accuse them of cheating somehow, or point out the areas of their lives where they’re not victorious.

But the wise people around us rejoice when we rejoice and suffer when we suffer. You know why? The answer lies in a question you were asked in your small group. Earlier, you were asked if people chose to suffer and rejoice for THEMSELVES or for OTHERS. The answer is both.

When we suffer with the hurting and rejoice with the triumphant, we’re helping out others. But we’re also providing a godly example, and it endears others to us. Think about it. How much will your team love you if you hurt when they hurt and rejoice when they rejoice? How much more likely are they to do the same for you when you hurt and rejoice!?!?

There are lots of reasons to hurt when others hurt, and rejoice when others rejoice, but none is better than “because God said so in His Word.” So, do that this week. And when you do, let us know about it so we can be a part of the suffering and joy with you.