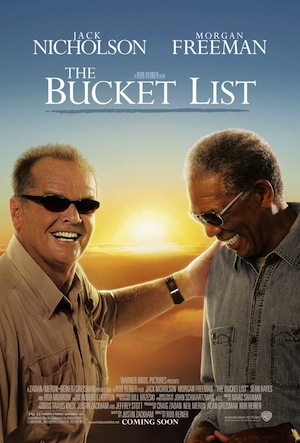 Main Point of Discussion: When we face death, it forces us to make a decision about faith in Jesus

The Movie Clip: “I just have faith.”

The Bucket List is the story of two very different men who are facing the same inevitable death, brought on by cancer. They both realize that their lives are incomplete, so they write out a list of things to do before they “kick the bucket,” hence the title of the film.

It’s a movie filled with rich portions of dialogue about the meaning of life. The two men talk about everything from family to faith to fun. The core message of the movie is about the desire we all have to live life to the fullest. We don’t want to have an unfinished bucket list.

Introducing the Clip:
You guys may not have seen this movie because it's probably not on most teens “have to see” rental lists, but it's a great thought-provoking and funny film nonetheless. It’s called The Bucket List, and it’s about two men who have six months to live because they're dying of cancer. Not wanting to die without living life to the fullest, they write out a list of things to do before they “kick the bucket”…which is where the title of the movie comes from. Edward, played by Jack Nicholson, is a multi-billionaire with no family at all, and has lived a fairly selfish life. Carter, played by Morgan Freeman, is a poor auto mechanic, but he has a family that loves him. This scene takes place on their flight from America to Nepal to check off another item from their bucket list…seeing the top of Mt. Everest. During the long, overnight flight, the subject of God and faith comes up. Let’s see where each man stands.

Edward: I love flying over the polar cap. Above the desolation.

Carter: The stars…it’s really one of God’s good ones.

Edward: So you think a being of some sort did all this?

Edward: You mean, do I believe if I look up in the sky and promise this or that the Biggie will make all this go away? No.

Carter: Then 95% of the people on Earth are wrong.

Edward: If life has taught me anything, it’s that 95% of the people are always wrong.

Edward: I honestly envy people who have faith. I just can’t get my head around it.

Carter: Maybe your head’s in the way.

Edward: Carter, we’ve all had hundreds of these discussions and every one of them always hits the same wall. Is there a sugarplum fairy or not? And nobody has ever gotten over that wall.

Carter: So, what do you believe?

Edward: I resist all beliefs.

Edward: We live. We die. And the wheels on the bus go round and round.

Carter: What if you’re wrong?

Carter: I’m not sure it works that way.

Edward: Well, you’re not claiming you know something I don’t.

Carter: Mm-mm. I just have faith.END CLIP AT 49 minutes and 28 seconds in Chapter 11

Transition Statement:
We can easily see that these two men are facing their deaths in very different ways. One man has faith in God, and the other man doesn’t. Let’s see which one the Bible says is right.

John 3:31-36
[31] The one who comes from heaven is above all. [32] He testifies to what he has seen and heard, but no one accepts his testimony. [33] The man who has accepted it has certified that God is truthful. [34] For the one whom God has sent speaks the words of God, for God gives the Spirit without limit. [35] The Father loves the Son and has placed everything in his hands. [36] Whoever believes in the Son has eternal life, but whoever rejects the Son will not see life, for God's wrath remains on him.


The Words of Jesus
In verse 34, John wrote, “the One whom God has sent speaks the words of God.” This simply means that Jesus speaks for God because Jesus was sent by God. Let’s take a look at some of the things Jesus said while He was on Earth. All of the following verses represent times when Jesus was talking about Himself.

QUESTION: In what way did this passage come true in Jesus’ life?
Read John 15:5

“I am the vine; you are the branches. If a man remains in me and I in him, he will bear much fruit; apart from me you can do nothing.”

QUESTION: According to this passage, what can we do without Jesus?
Read John 14:6

“I am the way and the truth and the life. No one comes to the Father except through me.”

QUESTION: Is there any other way to get to Heaven apart from Jesus?
Read John 11:25

“I am the resurrection and the life. He who believes in me will live, even though he dies; and whoever lives and believe in me will never die. Do you believe this?”

QUESTION: How does this verse apply to people who have faith in Jesus?Wrap Up:
I’ve made an observation about life that’s a little alarming; it always comes to an end! That’s right, every single one of us, no matter how young or how healthy, will die one day. Until then, there are two ways we can live our lives…with faith or without faith.

The Bible is very clear in its teaching about the difference between people who put their trust in Jesus… and those who don’t. According to 1 John 5:11-12, “And this is the Testimony. God has given us eternal life. This life is in the Son. He who has the Son, has life. He who does not have the Son of God does not have life.”

When Jesus walked around this planet 2,000 years ago, crowds followed Him everywhere, not only because of His love and compassion, but also because He taught with an unprecedented authority. As compassionate as He was to sinners, He wasn’t afraid to tell them the truth. Jesus claimed that He was the only way to God.

So the choice is yours. And it’s a choice you can’t NOT make! Let me rephrase that: You can't avoid making this choice. Because a choice to ignore Jesus' invitation to eternal life is a choice to reject Him.

To me, the choice is simple. Trust in Jesus, and get it all!!! Don’t trust Jesus, and lose it all!!! It’s your choice.

Everybody take a moment and think about your faith, or lack of faith. Now, I want to ask you the question that Carter asked Edward. Ready?

Everybody answer that question. If you have faith in Jesus, and you’re wrong that he's the only way to God…so what? You’ve still lived a life of love and forgiveness and compassion and the list goes on and on and on. (I promise you that you are not wrong, though!)

But, if you have no faith, and you’re wrong, then you will not have eternal life and you will have rejected Jesus’ invitation to eternity with Him.

Those last four verses we read, the ones where Jesus was talking about Himself, are crucial to us having faith in Jesus. First, we see that Jesus is a good shepherd willing to give His life for ours. He did just that when He died on the cross to cancel our sin. Then we discovered how Jesus described Himself as a vine, and we can do nothing or be nothing if we are apart from Him. We also read that Jesus said no one can see the Father…or enter Heaven…unless they do so THROUGH Him. Finally, Jesus offers us the promise of everlasting life by saying that even when we die, we will live again.

If you look inside yourself tonight and see that you have never placed your faith in Jesus, why not grab one of our adult leaders before you leave. We would love to talk with you about how you can put your trust in Jesus for the rest of your life. Let’s pray.