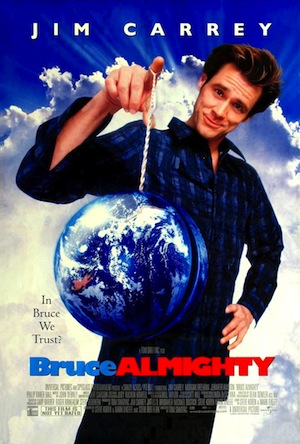 (Universal Pictures, 2003)
Main Point: God reveals Himself to us because He wants to be known. But when He reveals Himself, we not only learn who He is, but we learn who and what we are, as well.

Bruce Almighty focuses on the story of a man, Bruce Nolan (Jim Carrey), who complains against God so often and so adamantly that God actually shows up in his life to let him see what it’s like to be God and run the universe. When a mortal man is given the power of God, hilarity ensues…as do a few powerful lessons.

This clip isn’t the only MOVIE CLIP DISCUSSION from this particular film. We also have one on prayer, one on purpose inside pain, and one on being angry with God.

Introducing the Clip:
The movie Bruce Almighty showed anybody who saw it all the reasons why God is God…and we’re not! When Bruce was given the power of God, he misused it, usually in hilarious ways, but learned a powerful lesson about God in the process. But before Bruce became “Bruce Almighty,” he met God for the first time, face-to-face, in an empty building. Several key things happened in that conversation that I want you to take a look at now. Pay close attention to what God says about Himself…and what He says about Bruce.

(This clip is available for free from WingClips.com)

Transition Statement:
Pretty funny stuff, but did you notice that when God revealed Himself to Bruce, He wasn’t vague at all? He claimed to be “the One,” “the Creator of the Heavens and the Earth,” “the Alpha and Omega,” and ultimately, “God.” But in the process of revealing Himself to Bruce, he also revealed Bruce to Bruce. In other words, when God reveals Himself to us, He also clearly reveals who and what we are, as well. Let’s take a look at another person who had a face-to-face encounter with God to see what she learned about Him…and herself.

John 4:1-42 (NIV)
1 The Pharisees heard that Jesus was gaining and baptizing more disciples than John, 2 although in fact it was not Jesus who baptized, but his disciples. 3 When the Lord learned of this, he left Judea and went back once more to Galilee.
4 Now he had to go through Samaria. 5 So he came to a town in Samaria called Sychar, near the plot of ground Jacob had given to his son Joseph. 6 Jacob’s well was there, and Jesus, tired as he was from the journey, sat down by the well. It was about the sixth hour.
7 When a Samaritan woman came to draw water, Jesus said to her, “Will you give me a drink?” 8 (His disciples had gone into the town to buy food.)
9 The Samaritan woman said to him, “You are a Jew and I am a Samaritan woman. How can you ask me for a drink?” (For Jews do not associate with Samaritans.)
10 Jesus answered her, “If you knew the gift of God and who it is that asks you for a drink, you would have asked him and he would have given you living water.”
11 “Sir,” the woman said, “you have nothing to draw with and the well is deep. Where can you get this living water? 12 Are you greater than our father Jacob, who gave us the well and drank from it himself, as did also his sons and his flocks and herds?”
13 Jesus answered, “Everyone who drinks this water will be thirsty again, 14 but whoever drinks the water I give him will never thirst. Indeed, the water I give him will become in him a spring of water welling up to eternal life.”
15 The woman said to him, “Sir, give me this water so that I won’t get thirsty and have to keep coming here to draw water.”
16 He told her, “Go, call your husband and come back.”
17 “I have no husband,” she replied.
Jesus said to her, “You are right when you say you have no husband. 18 The fact is, you have had five husbands, and the man you now have is not your husband. What you have just said is quite true.”
19 “Sir,” the woman said, “I can see that you are a prophet. 20 Our fathers worshiped on this mountain, but you Jews claim that the place where we must worship is in Jerusalem.”
21 Jesus declared, “Believe me, woman, a time is coming when you will worship the Father neither on this mountain nor in Jerusalem. 22 You Samaritans worship what you do not know; we worship what we do know, for salvation is from the Jews. 23 Yet a time is coming and has now come when the true worshipers will worship the Father in spirit and truth, for they are the kind of worshipers the Father seeks. 24 God is spirit, and his worshipers must worship in spirit and in truth.”
25 The woman said, “I know that Messiah” (called Christ) “is coming. When he comes, he will explain everything to us.”
26 Then Jesus declared, “I who speak to you am he.”
27 Just then his disciples returned and were surprised to find him talking with a woman. But no one asked, “What do you want?” or “Why are you talking with her?”
28 Then, leaving her water jar, the woman went back to the town and said to the people, 29 “Come, see a man who told me everything I ever did. Could this be the Christ?” 30 They came out of the town and made their way toward him.
31 Meanwhile his disciples urged him, “Rabbi, eat something.”
32 But he said to them, “I have food to eat that you know nothing about.”
33 Then his disciples said to each other, “Could someone have brought him food?”
34 “My food,” said Jesus, “is to do the will of him who sent me and to finish his work. 35 Do you not say, ‘Four months more and then the harvest’? I tell you, open your eyes and look at the fields! They are ripe for harvest. 36 Even now the reaper draws his wages, even now he harvests the crop for eternal life, so that the sower and the reaper may be glad together. 37 Thus the saying ‘One sows and another reaps’ is true. 38 I sent you to reap what you have not worked for. Others have done the hard work, and you have reaped the benefits of their labor.”
39 Many of the Samaritans from that town believed in him because of the woman’s testimony, “He told me everything I ever did.” 40 So when the Samaritans came to him, they urged him to stay with them, and he stayed two days. 41 And because of his words many more became believers.
42 They said to the woman, “We no longer believe just because of what you said; now we have heard for ourselves, and we know that this man really is the Savior of the world.”


Wrap Up:
This was a pretty cool time together. We saw what happened to a fictional man when he supposedly met God. But then we took a look at a real story about a Samaritan woman actually meeting God’s Son Jesus.

In both accounts, these people not only learned about who God was, they also learned who they were. In both cases, they both had to come to grips with their shortcomings. Bruce had ridiculed God and the woman was living with a man who was not her husband…and she’d had 5 husbands prior to this conversation. Clearly this woman had issues when it came to sex and relationships.

What she struggled with isn’t important. We all struggle in various ways. What IS important is that God knows about those struggles, and instead of rejecting us because of them, He chooses to reveal Himself to us in spite of them. In fact, He even used those struggles to prove He was who He said He was!

Here’s how I want us to close tonight. Let’s think about standing before God for a moment.

(Ask these following questions with enough time in between to allow for solid reflection.)

The bottom line is this: God has met with us. Tonight! He wants us to know Him and to truly know ourselves.

If God has revealed some things in you that you don’t like, let me invite you to stick around for a few more minutes to talk with one of our leaders. You’ll be glad you did.