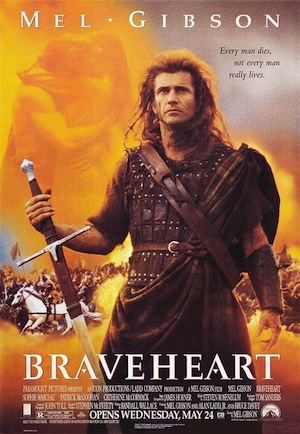 Main Point: Leadership is a gift and anyone with it needs to display it. If leaders lead appropriately, others will follow.

The Movie Clip: If You Would Just Lead Them
Braveheart follows the legacy of a man named William Wallace (played by Mel Gibson), a bold Scotsman, who used his sword and his intelligence to rally and free his fellow countrymen against the tyranny of England. After losing his wife to the villainy of England’s laws, Wallace leads Scotland against the mighty armies of England and their murderous leader, King Edward, also known as Longshanks. The movie stirs deep emotions about freedom and oppression and justice inside the story it tells.

Introducing the Clip:
Braveheart was one of the greatest movies from the 90s, an era in which many of you were born. If you haven’t seen this powerful film about oppression and freedom and justice, then let me set the stage for you. Scotsman William Wallace, played by Mel Gibson, has just won a series of military victories against the dreaded English army, and so, his people want him to become the Guardian of Scotland. But at his coronation service, Wallace confronts the most powerful leader of his people, Robert the Bruce. William surprises him with some powerful words about leadership. Let’s take a look.

START CLIP AT 1 HOUR AND 32 MINUTES AND 59 SECONDS. Or this clip is available to download and purchase from WingClips (as seen in the embedded video clip above). But the above clip is only for the first 2/3 of the scene. It doesn’t include the last part where Robert and Wallace speak privately outside.

Scotsman: I knight thee Sir William Wallace. Sir William, in the Name of God, we declare and appoint thee, guardian and high protector of Scotland and they captains as aides-de-camp. Stand and be recognized.

Robert the Bruce: Does anyone know his politics?

No, but his weight with the commoners could unbalance everything. The Balliols will kiss his arse, and so we must.

(After a short celebration, a member of the Balliols steps forward and asks William to support him in his rise to power. This leads to a huge disagreement that causes William to simply leave. That’s when Robert the Bruce steps out to have a private word with William.)

Robert: Wait! I respect what you said, but remember that these men have lands and castles. It’s much to risk.

Wallace: And the common man that bleeds on the battlefield, does he risk less?

Robert: No. But from top to bottom, this country has got no sense of itself. Its nobles share allegiance with England. Its clans war with each other.

Robert: Aye. If you make enemies on both sides of the border, you’ll end up dead.

Wallace: We all end up dead. It’s just a question of how and why.

Robert: I’m not a coward. I want what you want, but we need the nobles.

Wallace: We need them?

Wallace: Nobles. Now tell me, what does that mean, to be noble? Your title gives you claim to the throne of our country, but men don’t follow titles. They follow courage. Now, our people know you. Noble and common, they respect you, and if you would just lead them to freedom, they’d follow you. And so would I.END CLIP AT 1 HOUR AND 37 MINUTES AND 10 SECONDS

Transitional Statement:
That was a tense moment between Wallace and Robert. It’s never easy to challenge someone, and it’s usually never easy to be challenged! In this scene, we saw both men be moved outside their comfort zones…but that’s what leaders do. They move outside their comfort zones. To see good leaders lead is quite a sight! I’m always amazed by the fact that leaders, when they display their gifts, always get others to follow them. Let’s spend the next few moments talking about leadership so we can better understand how to lead in God’s Kingdom.

Context of story: In Esther, Chapter 3, Mordecai (a man who loved and feared God), discovered a plot by the evil Haman to wipe out every living Jew in the kingdom. This story takes place when God’s people are already conquered, spread out in other nations, and weak. It would be relatively easy to completely destroy God’s people during this era. So, Mordecai does the only thing he knows to do; he goes and talks to his family member, Esther, who has just been made queen of the land next to King Xerxes.

When Mordecai learned all that had been done, Mordecai tore his clothes and put on sackcloth and ashes, and went out into the midst of the city, and he cried out with a loud and bitter cry. 2 He went up to the entrance of the king’s gate, for no one was allowed to enter the king’s gate clothed in sackcloth. 3 And in every province, wherever the king’s command and his decree reached, there was great mourning among the Jews, with fasting and weeping and lamenting, and many of them lay in sackcloth and ashes. 4 When Esther’s young women and her eunuchs came and told her, the queen was deeply distressed. She sent garments to clothe Mordecai, so that he might take off his sackcloth, but he would not accept them. 5 Then Esther called for Hathach, one of the king’s eunuchs, who had been appointed to attend her, and ordered him to go to Mordecai to learn what this was and why it was. 6 Hathach went out to Mordecai in the open square of the city in front of the king’s gate, 7 and Mordecai told him all that had happened to him, and the exact sum of money that Haman had promised to pay into the king’s treasuries for the destruction of the Jews. 8 Mordecai also gave him a copy of the written decree issued in Susa for their destruction, that he might show it to Esther and explain it to her and command her to go to the king to beg his favor and plead with him on behalf of her people. 9 And Hathach went and told Esther what Mordecai had said. 10 Then Esther spoke to Hathach and commanded him to go to Mordecai and say, 11 “All the king’s servants and the people of the king’s provinces know that if any man or woman goes to the king inside the inner court without being called, there is but one law- to be put to death, except the one to whom the king holds out the golden scepter so that he may live. But as for me, I have not been called to come in to the king these thirty days.” 12 And they told Mordecai what Esther had said. 13 Then Mordecai told them to reply to Esther, “Do not think to yourself that in the king’s palace you will escape any more than all the other Jews. 14 For if you keep silent at this time, relief and deliverance will rise for the Jews from another place, but you and your father’s house will perish. And who knows whether you have not come to the kingdom for such a time as this?” 15 Then Esther told them to reply to Mordecai, 16 “Go, gather all the Jews to be found in Susa, and hold a fast on my behalf, and do not eat or drink for three days, night or day. I and my young women will also fast as you do. Then I will go to the king, though it is against the law, and if I perish, I perish.” 17 Mordecai then went away and did everything as Esther had ordered him.


Wrap Up:
During our time together, we watched a clip from a powerful movie. Braveheart tells the story of how one man stepped up and led his country to freedom against injustice and oppression. But we also read another true story, this one from the Bible, about how one girl stepped up and saved her entire nation.

You may not know this, but the movie Braveheart ends with the death of William Wallace. But before it ends, we’re told that, because of his leadership, Scotland went on to win its freedom. Likewise, we didn’t read the entire story of Esther, so let me tell you how it ends. The Bible claims that Esther was used by God in powerful ways, to not only save herself and Mordecai, but the ENTIRE nation of Israel! Instead of hundreds of thousands of innocent Jews being murdered, they were all spared.

And all because one young girl decided to lead.

So, what about you? Are you leading? If so, how are you doing? If not, why not?

We’re going to spend our final few moments together in prayer. Please go ahead and get into groups of 2-3 so we can pray for each other. Specifically, I want us to pray and ask God for three things: