Boy in the Striped Pajamas, The 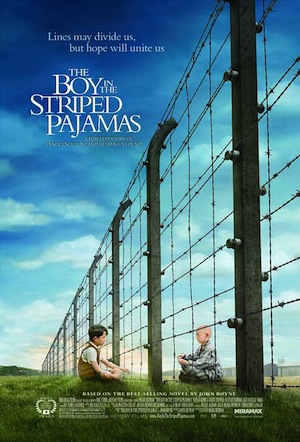 Main Point of Discussion: Even though it is sometimes convenient to deny Jesus, there is always a price to pay when we do so.

The Movie Clip: Denial of friendship

The Boy in the Striped Pajamas was not a blockbuster of 2008, but it was definitely a great movie. It takes place during WWII and follows the life of Bruno, the young son of a powerful Nazi officer who is responsible for killing hundreds and thousands of Jews at the concentration camp he manages. It’s not long before Bruno meets and befriends a little boy imprisoned in the camp. Little did either of the boys know that their friendship would get them into so much trouble.

Introducing the Clip:
The clip I’m about to show is from the movie The Boy in the Striped Pajamas. The context is this- the boy in the “pajamas” is Jewish, and he has begun a forbidden friendship with a German boy. As you probably already know, this was not allowed AT ALL during WWII because of the racial prejudice many Germans had against the Jewish people. In this scene, a Nazi soldier discovers their friendship.

This clip is available at this link, or you can rent/purchase the film and cue it up to the scene described.

Transitional Statement:
As you can see, Bruno seemed to be fine with the friendship- until it presented a problematic situation with the German soldier. At that point he obviously changed his mind about his friend and blatantly lied about his involvement with the Jewish boy.

Luke 22:54-62 (New Living Translation)
54 So they arrested him and led him to the high priest’s home. And Peter followed at a distance. 55 The guards lit a fire in the middle of the courtyard and sat around it, and Peter joined them there. 56 A servant girl noticed him in the firelight and began staring at him. Finally she said, “This man was one of Jesus’ followers!”
57 But Peter denied it. “Woman,” he said, “I don’t even know him!”
58 After a while someone else looked at him and said, “You must be one of them!”
“No, man, I’m not!” Peter retorted.
59 About an hour later someone else insisted, “This must be one of them, because he is a Galilean, too.”
60 But Peter said, “Man, I don’t know what you are talking about.” And immediately, while he was still speaking, the rooster crowed.
61 At that moment the Lord turned and looked at Peter. Suddenly, the Lord’s words flashed through Peter’s mind: “Before the rooster crows tomorrow morning, you will deny three times that you even know me.” 62 And Peter left the courtyard, weeping bitterly.

Say This:
It’s interesting, because the context of this event is very much like the scene we watched in the clip. Peter had spent over three years with Jesus, so many people would know that they were friends. However, when questioned first by a slave girl and then others, Peter lied about having anything to do with Jesus. And as we read, the consequence was that he was heartbroken and experienced great emotional pain.

Wrap Up:
The great news is that even though we all betray Jesus from time to time, forgiveness and a renewing of our friendship with Him is ALWAYS available. Let me read to you what happened between Peter and Jesus after Jesus rose from the dead.

Jesus was letting Peter know that even though he denied Him, Jesus still had plans to use Him. The same is true for us- we may have failed Christ and are feeling terrible, but all Jesus wants to know is if we truly love Him- and if we do, we can still do great things for God.

Right now I want you all to close your eyes and think about yourselves and not those around you. If you are sitting here and you’re thinking, “I have sinned too much- there is no way Jesus could forgive me,” picture Jesus looking into your eyes and asking you, “Do you love me”? If you do truly love Him, you can be sure that all is forgiven and God wants to use you.

There may be others who don’t have that friendship with Jesus because you’ve never trusted in Him for salvation. If you’d like that relationship with God, tell Him. Let Him know that you are trusting in Christ’s death on the cross for forgiveness, and thank Him that He loves and values you so much.