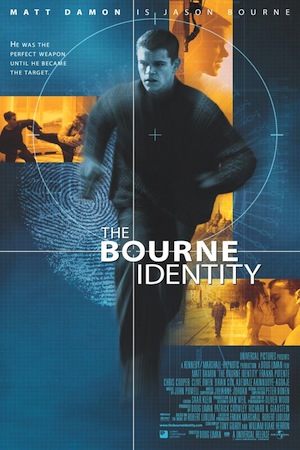 Main Point: We were made for greater things than we might have imagined.

This movie is about a man (Matt Damon) who wakes up to find two gunshots in his back and no memory at all. He soon learns that he is an elite government agent, and that the government no longer trusts him. It’s a great movie with lots of action, but there are a few swear words throughout the movie.

Clip: Why do I have these abilities?
This particular clip is right in the middle of a chapter, so we don’t have the luxury of easy cuing. But if you’ve got a counter, the time of the beginning of the scene is right around 33:48. The clip is only about a minute and a half long. The clip features Jason Bourne (Matt Damon) sitting across from his new comrade Marie. They are sitting in a diner, discussing Jason’s amnesia. He begins to inquire about the fact that he had a bank account number lodged in his hip at the beginning of the movie, which led to the discovery of a safe deposit box in his name, containing multiple passports, tons of cash, and a gun. He then inquires about his own behavior in the diner, marking that it is not normal behavior. You definitely feel his frustration, knowing that there is an identity there that he hasn’t discovered yet! The end of the scene is right around 35:12, right after his final question: “Now how could I know all that and not know who I am?”

JASON: Who has a safety deposit box full of money and six passports and a gun? Who has a bank account number in their hip? I come in here, and the first thing I’m doing is I’m catching the sight-lines and I’m looking for an exit.

MARIE: I see the exit sign too. I’m not worried. I mean, you were shot. People do all kinds of weird and amazing things when they’re scared.

JASON: I can tell you the license plate numbers of all six cars outside. I can tell you our waitress is left-handed and the guy sitting up at the counter weighs two hundred and fifteen pounds and knows how to handle himself. I know the best place to look for a gun is the cab of the gray truck outside. And at this altitude I can run flat-out for a half mile before my hands start shaking. Now why would I know that? How could I know that and not know who I am?

Transitional Statement:
Wouldn’t that be frustrating to not know who you are? What if we all had a secret identity that we hadn’t yet figured out? I love this movie, because the whole movie is about a guy trying to figure out exactly who he is, and in the process of it, he gets to define who that person is. Perhaps life would be much more exciting for us if we had a secret identity, some special abilities that we don’t even know about. Let’s go through these questions, and deal with this new identity crisis.

Ephesians 2:10
For we are God’s workmanship, created in Christ Jesus to do good works, which God prepared in advance for us to do?

Read what Jesus says in John 14:12
I tell you the truth, anyone who has faith in me will do what I have been doing. He will do even greater things than these, because I am going to the Father.

Wrap-Up:
It is such an amazing thing that God has created us for great things. The idea that because of our faith, God can use us to do greater things than Jesus did should be totally life-changing. We must realize that God has made us with a great purpose. We have a secret identity. Maybe it’s not the identity of a government agent, but it is completely amazing. God has created us to do great things. The question now is not, God, can you actually use me? The question for now is God, what are you calling me to? Are you going to believe what Jesus says, that you were created to do amazing things in the world, that you were put on this earth by God, not just to walk around and live a normal life, but to make history? It’s time to stand up and say, “God, use me. I’m ready to let you change the world through me.” If we simply believe these promises from God, all we have to do is be willing. Are you willing to accept your identity?