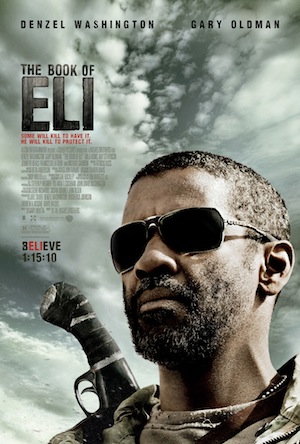 The Book of Eli is a great movie with many clips that provoke discussion. It features Denzel Washington as the main character on a mission in post-nuclear America to bring the only remaining copy of the Bible somewhere “west.” The film is quite gritty and violent at times, but at the core of it is a hunger and thirst for God and purpose in life.

The clip we’re using for this particular discussion features Eli about to leave a semi-civilized hamlet and continue his journey—but he’s stopped by Carnegie (played by Gary Oldman), the big cheese in town who’s learned that Eli carries “the book”…and wants it in order to fulfill his power-hungry, evil purposes.

Introducing the Clip:
Today I want to show you a clip from the movie The Book of Eli. Some of you have seen this movie already, but for those who haven’t, it features Denzel Washington as the main character on a mission in post-nuclear America to bring the only remaining copy of the Bible somewhere “west.” The clip we’re using features Eli about to leave a town and continue his journey—but he’s stopped by Carnegie and his gun-toting gang of henchmen. Carnegie is the big cheese in town who’s just learned that Eli carries “the book”…and wants it in order to fulfill his power-hungry, evil purposes. Let’s take a look at this scene.

BEGIN CLIP AT 49 minutes and 20 seconds (in Chapter 12), just after Eli leaves the store.

Carnegie: Is that thing loaded? I don’t think it’s loaded.

Eli: Only one way to find out.

Carnegie: Look, I need that book. I mean…I want the book. And you. But if you make me choose, I’ll kill ya—I’ll take the book.

Carnegie: I grew up with it. I know its power. And if you read it, then so do you. That’s why they burned them all after the war. (pausing; ramping up his argument) Hey, just stayin’ alive is an act of faith; building this town is an even bigger act of faith, but they don’t understand that. None of them. And I don’t have the right words to help them, but the book does. I admit…I’ve had to do things…many, many things I hate to build this, I confess that…(walking closer to Eli) but if we have that book, I wouldn’t have to. Now imagine…imagine how different, how righteous this little world could be if we had the right words for our faith. (raising his voice) Well, people would truly understand why they’re here and what they’re doing and wouldn’t need any of the uglier motivations. (whispering) It’s not right to keep that book hidden away; it’s meant to be shared with others; it’s meant to be spread. Isn’t that what you want?

Eli: With all my heart and soul. (pauses) I always believed that I’d find a place where this book belonged, where it was needed…but I haven’t found it yet. (walks away)

Carnegie: (pauses, shakes his head, then mutters to himself) I love this guy. (pauses, now chuckles) I love this guy! (walks up to and whispers to head henchman, Redridge) Shoot him…please.END CLIP AT the 52-minute mark, just before the shooting begins.

Transitional Statement:
In this scene Eli is faced with a choice: Give up his hard life walking the barren highways in search for a place he hasn’t seen in favor of an easier existence—all he has to do is give Carnegie “the book.” No big deal, right? The only problem is that giving in to Carnegie equals giving up on God’s will for Eli’s life.

Matthew 4:1-17 (NIV)
1Then Jesus was led by the Spirit into the desert to be tempted by the devil.

2After fasting forty days and forty nights, he was hungry. 3The tempter came to him and said, “If you are the Son of God, tell these stones to become bread.”

4Jesus answered, “It is written: ‘Man does not live on bread alone, but on every word that comes from the mouth of God.’”

5Then the devil took him to the holy city and had him stand on the highest point of the temple.

6“If you are the Son of God,” he said, “throw yourself down. For it is written:

“He will command his angels concerning you, and they will lift you up in their hands, so that you will not strike your foot against a stone.’”

7Jesus answered him, “It is also written: ‘Do not put the Lord your God to the test.’”

8Again, the devil took him to a very high mountain and showed him all the kingdoms of the world and their splendor. 9“All this I will give you” he said, “if you will bow down and worship me.”

10Jesus said to him, “Away from me, Satan! For it is written: ‘Worship the Lord your God, and serve him only.’”

11Then the devil left him, and angels came and attended him.

Wrap Up:
Tonight we’ve been considering how difficult it can be to stay on the path God has set for us and carry out his will in our lives. There are so many ways the devil can sidetrack us, trip us up, frustrate us, deceive us. And it usually won’t happen all in one fell swoop—in other words, Satan doesn’t usually entice you to change your mind or allegiances in an instant. Instead he usually does it over time through seemingly insignificant, even “harmless,” circumstances. Are you finding that’s true for you? If you can look back over the last few months or even years, have you been sinning in small ways—and then bigger and bigger ways? Have you been taking small steps off the path God’s ordained for you—and then taken bigger and bigger strides away from it?

If so, don’t lose hope! God is in the business of redeeming our lives, no matter how far we’ve gone in the opposite direction. A couple of inches or a million miles—it makes no difference. God can get you back on track and doing his will, no matter what your circumstances or what your heart and soul feel like right now.

Let’s bow our heads so we can think about ourselves and not those around us. As you sit there with your eyes closed and your head bowed, I want you to think about what God wants you to do with your life—what God’s will is for you. Then I want you to think about passages in Scripture that can help you stay true to your path. And remember that I or one of the other adult leaders can help you identify Scriptures that can strengthen you—and we’ll always be praying for you.