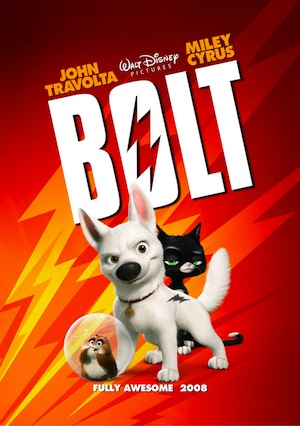 (Disney Productions, 2008)
Main Point: God doesn’t need “superheroes” to help Him rescue the world; He can use “regular” people like you and me.

Bolt tells the story of a dog who plays a heroic canine in a hit TV show who has some trouble recognizing that he doesn't actually have superpowers. This reality becomes something of a hindrance when he is accidentally shipped from Hollywood to New York City. From there, he has to make his way home with the help of an old cat and an overweight hamster in a plastic ball.

Introducing the Clip:
Some of you may have seen the Disney film Bolt, the story about the dog who plays a superhero on a TV show. However, in real life, Bolt is just like any other dog… completely void of any super powers. But in this scene we are about to watch, he makes a courageous decision to help his friend even though he does NOT have any super powers. Let’s see what happens when a regular dog attempts something extraordinary.

Scene Description:
This clip is about 5 minutes long. In it, Bolt and Rhino sneak into the animal shelter to rescue their friend Mittens the Cat. First they must sneak past the employees working at the front desk. They do that easily enough, but find that there is another employee guarding the area where cats are kept.

Rhino distracts that guard while Bolt sneaks in to find Mittens. When he locates her, she is a bit surprised that Bolt would come all the way back to the shelter for her, especially since she knows he really doesn’t have any superpowers.

They talk briefly and encourage one another for the “jail break” they are about to attempt. After opening her cage, Bolt leads Mittens and Rhino out of the animal shelter… in a very chaotic manner!

Transitional Statement:
This clip demonstrates the idea that ordinary people can do extraordinary things if they are courageous enough to attempt them. As Christians, one of the extraordinary responsibilities we have is to share the Gospel with our friends who do not know Jesus. Like Mittens the Cat, our friends are also trapped, but by sin. Do we have the courage as “ordinary” Christians to help God rescue our friends from sin?


Judges 6:11-16
Then the angel of the LORD came and sat beneath the great tree at Ophrah, which belonged to Joash of the clan of Abiezer. Gideon son of Joash was threshing wheat at the bottom of a winepress to hide the grain from the Midianites. The angel of the LORD appeared to him and said, “Mighty hero, the LORD is with you!”

“Sir,” Gideon replied, “if the LORD is with us, why has all this happened to us? And where are all the miracles our ancestors told us about? Didn’t they say, ‘The LORD brought us up out of Egypt’? But now the LORD has abandoned us and handed us over to the Midianites.”

Then the LORD turned to him and said, “Go with the strength you have, and rescue Israel from the Midianites. I am sending you!”

“But Lord,” Gideon replied, “how can I rescue Israel? My clan is the weakest in the whole tribe of Manasseh, and I am the least in my entire family!”

The LORD said to him, “I will be with you. And you will destroy the Midianites as if you were fighting against one man.”


Wrap Up:
In the Bolt clip we see how Bolt returned to rescue his friend even though it was dangerous and he didn’t have any superpowers. As Christians, we know that God is with us just like Gideon, and He wants us to be a ‘mighty hero’ by sharing the gospel with those who don’t know Jesus, and coming alongside those who are trapped, maybe in a habit or other type of prison of sin. God wants to use us to help set our friends free! The challenge for us is to look at each day as an opportunity to rise above the ordinary and let God do extraordinary things through us.