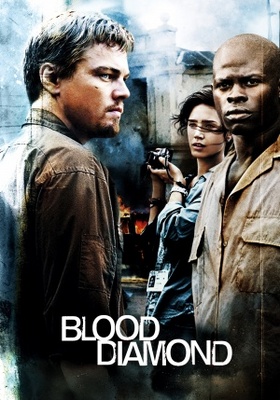 (Warner Brothers Pictures, 2006)
Main Point of Discussion: You have a Heavenly Father who loves you very much.

The Movie Clip: “I am your father.”

Blood Diamond is an Oscar-nominated film about illegal or “blood” diamonds that are smuggled out of Africa and sold on free markets worldwide at a tremendous price to the people of Africa. The film is an action packed docudrama, with outstanding performances by Leonardo DiCaprio (Danny Archer), Djimon Hounsou (Solomon Vandy), and Jennifer Connelly (Maddy Bowen). The inescapable theme of this movie is a father’s love for his children, and the price he is willing to pay to save them.

The clip we are using for this particular discussion features the climactic scene of an African father named Solomon Vandy, who has pursued his kidnapped son, Dia Vandy, across the continent of Africa in order to save him. Weeks earlier, R.U.F. (Revolutionary United Front) guerillas rampaged into the village where the Vandys lived, murdered many people, kidnapped Dia, and enslaved Solomon to work in the diamond fields. During his time in slave labor, Solomon finds a HUGE diamond and buries it, hoping to dig it up later and use it to “buy back” his son. This scene illustrates the passion and struggle of a father who has risked everything to regain his son.

Introducing the Clip:
Tonight I want to show you a clip from the blockbuster, Blood Diamond. If you saw the movie, you will immediately remember this powerful scene. If you haven’t, just know that Solomon Vandy, the African man in this clip, has been in constant pursuit of his son, Dia, since he was kidnapped by R.U.F. guerillas (the bad guys) several weeks earlier. Solomon himself was enslaved by the R.U.F. and forced to work in the diamond fields. He finds a rare diamond worth millions and decides to bury it, hoping it will help him “buy back” his son.

Meanwhile, Dia’s kidnappers, the violent militia known as the R.U.F., has brainwashed Dia and turned him into a killer. He is even given a new name, “See No More,” and is lied to about his family. His captors have conditioned him to be a ruthless killer. The R.U.F. has made him commit terrible atrocities, to the point where he cannot even remember his former identity, or family.

After his escape from slavery, Solomon chases his son across the continent of Africa, risking his life time and again, to save his son. Take a look at what happens when a father is face to face with a son who hardly remembers the life they once shared together.

NOTE: you may want to put the subtitles up on the screen for this clip because you won’t want your students to miss a word! The father’s words are so powerful but his accent is heavy and may be hard to understand.

Danny Archer: It had better be there, huh?

Danny Archer: You got it?! Have you got it, huh?!! (On screen, Solomon pulls the diamond from its buried position.)

Solomon Vandy: Yes, got it. Oh yes… (On screen, Danny sees Solomon’s son, Dia, train a gun on him and his father.)

Danny Archer: Solomon… (Solomon looks up to see his son pointing a gun at them.)

Solomon Vandy: Dia. What are you doing?! Dia!! Look at me. Look at me!! What are you doing? (Walking towards his son very carefully…) You are Dia Vandy of the Proumanday Tribe. You are a good boy. You love soccer, and school. Your mother loves you so much. She waits by the fire making plantains and red stew. And the new baby…. The cows wait for you, and Bakwu, the wild dog who minds no one but you. Mmm? I know they made you do bad things. You are not a bad boy. I am your father, who loves you. And you will come home with me and be my son…again. (Dia lowers the gun and then they embrace.)END CLIP at 1 hour and 58 minutes and 40 seconds.

Transitional Statement:
This clip clearly shows how much Dia’s father loved him. Even though Solomon knew what his son had done, he still wanted Dia to come back home and be his son again. He proved that by risking his life to get that message of love to his son.


Going Further: In these two stories, two “possessions” were lost, a sheep and a coin. Let’s now read a story about a “person” who gets lost.

Everyone close your eyes and bow your heads for a moment. Only think about this conversation, not about who is around you, or what you have to do when you get home. Think about this, because this is the most important thing you can think about, ever! Maybe you are someone who has never been “found” like a lost sheep or coin…or never been “welcomed back and rejoiced over” like a lost child, by God. Tonight you can meet God! God never says, “I told you so,” or turns His back on us. In fact, the Bible teaches just the opposite: that all of Heaven rejoices when we decide to return to Him. All you have to do is ask for His forgiveness and promise to live your life for Him, and not yourself anymore.

But, maybe you are someone who has been “found” or “welcomed back” by God, but you have wandered your way into another pig pen in life. Tonight, you also, can return to God by asking for forgiveness and a renewed sense of direction for your life. I can make you three promises that are true for all of us. First, we all sin and separate our lives from God. Second, we all experience life-draining guilt about those actions or decisions. But thirdly, we can know for a fact that God forgives us if we ask! 1 John 5:13 says, “I write these things to you who believe in the Name of the Son of God, so that you may know that you have eternal life.” You do not have to wonder if you are loved by God. You can know for a fact! (If the leader has a short personal story that would impact the moment, he/she could share it at this point.)

So, no matter which you happen to be, do not leave tonight without talking to one of the leaders about God’s love for you…because you have a Heavenly Father who loves you VERY much.