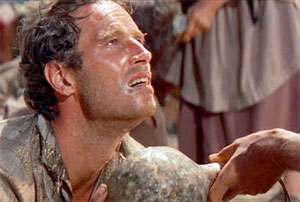 (MGM, 1959)
Main Point of Discussion: To get a glimpse at the person of Jesus

The Movie Clip: “Water from a Stranger”

It seems like every Easter I’m looking for a good movie clip to give kids a glimpse of Jesus and our need for a Savior. Movies like Amistad and Superman Returns provided good clips on this subject (you can find these movie clip discussion ideas in this section of our web site also). But I must admit, one of my favorite clips is from the 1959 film Ben Hur. Most students today haven’t seen this old classic that won 11 Academy Awards, including Best Picture.

Introducing the Clip:
Who is Jesus? What was He like when He was walking around earth? How did He respond to normal people day to day? How did people respond when they saw Him?

In 1959 a film called Ben Hur won 11 Academy Awards, including best picture. This film was about a guy named Ben Hur who lived during the time of Jesus Christ. The movie isn’t about Jesus, but a couple of times during the film, Ben Hur crosses paths with Him. This is one of those scenes.

Either rent the video and show the scene described below, or here it is embedded from YouTube and it can be found here:  https://www.youtube.com/watch?v=tVlf7OiiTJE

(Note: this scene has hardly any dialogue. The following is a scene description.)

The scene starts from the carpenter’s shop belonging to Jesus or possibly His father. (You never see Jesus’ face.) The camera moves outside where we see the approaching group of slaves including Ben Hur, played by Charlton Heston.

The slaves are literally dying of thirst. As they bring out water for the slaves, the slaves gulp it up like they haven’t had a drop in days. When it is Ben Hur’s turn, they skip him. The guard doesn’t allow him to drink. Ben Hur falls to the dirt and mutters a desperate prayer, “God . . . help me!”

Then a shadow comes over Ben Hur, as someone pours water over him and helps him drink. One of the guards tries to rebuke this unseen stranger (Jesus), but turns away shamefully when looked at by the stranger.

As the line of slaves leave, the stranger walks into view and we see the back of him . . . it looks like the typical American depiction of Jesus.

Transitional Statement:
This movie seemed to capture something special about Jesus. He didn’t say a word. He wasn’t outspoken or rude. He just…cared. He acted on His compassion.

Later in Jesus’ life, he became a prisoner, wrongfully accused of crimes He didn’t commit. Even the Roman government saw his innocence. Let’s read about this.

Jesus’ trial before Caiaphas ended in the early hours of the morning. Then he was taken to the headquarters of the Roman governor. His accusers didn’t go in themselves because it would defile them, and they wouldn’t be allowed to celebrate the Passover feast. [29] So Pilate, the governor, went out to them and asked, “What is your charge against this man?” [30] “We wouldn’t have handed him over to you if he weren’t a criminal!” they retorted. [31] “Then take him away and judge him by your own laws,” Pilate told them.“Only the Romans are permitted to execute someone,” the Jewish leaders replied. [32] This fulfilled Jesus’ prediction about the way he would die. [33] Then Pilate went back inside and called for Jesus to be brought to him. “Are you the King of the Jews?” he asked him.[34] Jesus replied, “Is this your own question, or did others tell you about me?” [35] “Am I a Jew?” Pilate asked. “Your own people and their leading priests brought you here. Why? What have you done?” [36] Then Jesus answered, “I am not an earthly king. If I were, my followers would have fought when I was arrested by the Jewish leaders. But my Kingdom is not of this world.”[37] Pilate replied, “You are a king then?”“You say that I am a king, and you are right,” Jesus said. “I was born for that purpose. And I came to bring truth to the world. All who love the truth recognize that what I say is true.” [38] “What is truth?” Pilate asked. Then he went out again to the people and told them, “He is not guilty of any crime.”

Pilate declared Jesus “not guilty.” But he also asked a question: “What is truth?” That’s a good question. The answer is Jesus.

Wrap Up:
Centuries ago, Easter found its way to our calendar to celebrate a very important event: Jesus’ resurrection. That’s right—not His death—but His resurrection. On the day we now celebrate as Easter, Jesus did something that no one has ever done—He conquered death to bring you life.

Through Christ’s death, we can have life. That is the truth. The only question you have to ask yourself is, “What do I believe?” If you are willing to put your faith in God and obey Him, then the truth will set you free.