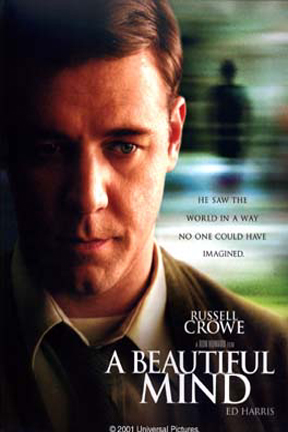 Main Point: When things are going well, when we are blessed, or when we make accomplishments, we must remember to give God the credit that is due.

Attention Grabber: Movie – A Beautiful Mind
This movie is based on a true story about a man named John Nash, a complete mathematical genius known for his theories on balance. His genius takes him to being entangled in a mysterious conspiracy, one that only the love between him and his wife can free him from. The movie is an amazing story of love and passion and courage. This movie brings us exceptional acting by Russell Crowe, Ed Harris, and Jennifer Connelly, and the writing is incredible too.

Clip: “You are the reason that I am.”
The clip used here takes place toward the end of the movie. John Nash has won the Nobel Prize and is up on stage to give his acceptance speech. He is old now and has come a long way. During his speech, he makes eye contact with his wife and begins to speak directly to her from the stage, telling her that she is the reason he ever succeeded and the reason that he exists.

The scene begins in the middle of chapter 19, at exactly 125:00 or this clip is available to download and purchase from WingClips (as seen in the embedded video clip here).

Scene Introduction:
Today we’re going to watch a scene from a movie called A Beautiful Mind. But I have to set up the scene so you know what’s going on. John Nash, played by Russell Crowe, is a mathematical genius. He’s getting old now, but he’s just been selected for the Nobel Prize, which is a huge worldwide award for contributing something incredible to the world. It’s an enormous honor. But to get to where he is at, he has had to deal with mental illness, a marriage that almost failed because of his sickness, people labeling him as a crazy person, and several people who just plain didn’t want him to succeed. Because of his wife and the love she’s had for him, John Nash has received one of the greatest awards that a man can receive in the world today. So when we watch this clip, you’ll see John Nash giving his thank-you speech for the Nobel Prize. But look at where his focus is. It’s huge; don’t miss it.

JOHN NASH: Thank you. I’ve always believed in numbers. In the equations and logic that lead to reason. But after a lifetime of such pursuits, I ask, what truly is logic? Who decides reason? My quest has taken me through the physical, the metaphysical, the delusional, and back. And I have made the most important discovery of my career—(locks eyes with his wife) the most important discovery of my life. (Now speaking directly to his wife) It is only in the mysterious equations of love that any logical reasons can be found. I’m only here tonight because of you. You are the reason I am. You are all my reasons. Thank you.

(The audience gives John Nash a standing ovation. He uses her handkerchief to wipe his face and begins to leave the stage.)End the clip at 127:28, after John Nash begins to walk off the stage.

Transitional Statement:
One of the reasons that this scene is so powerful is that there are thousands of people in that room, and yet John Nash is able to see his wife in the crowd and give her the credit she deserves. He looks through the whole crowd and through it all is able to see who really needs the real thank-you. You know, a lot of times, when we do these Bible studies and devotions, we discuss the bad stuff in our lives or the stuff that we need to change about ourselves, and we don’t really get a chance to focus on the really good things in our lives. Today we’re focusing on these good things. But the real idea is that in the midst of all the great things and people that are around us, and in the midst of all the attention we may sometimes get, we need to be able to see through it all and still focus on the one who deserves all of the credit…God. Right now we’re going to split up into our discussion groups, and we’re going to figure out just how to do what John Nash did: put the credit where it’s due.


Give the students a couple minutes to write.

Read 1 Chronicles 16:8-12
“Give thanks to the Lord, call on his name; make known among the nations what he has done. Sing to him, sing praise to him; tell of all his wonderful acts. Glory in his holy name; let the hearts of those who seek the Lord rejoice. Look to the Lord and his strength; seek his face always. Remember the wonders he has done, his miracles, and the judgments he pronounced”

Now I want you to close your eyes and concentrate on all the things that are on your paper. Think about all the great things God has done in your life. Maybe He’s blessed you with parents that love you and take good care of you. Maybe He’s blessed you with good friends. Maybe you’re happy to be a part of this group. Maybe you’re happy that you’ve got plenty of air to breathe and food to eat throughout the week. Maybe you’re doing well in school or you’ve been pretty successful in sports lately. Perhaps you’re just glad that He sent Jesus to give us an opportunity to go to Heaven. That’s awesome. Whatever those things are, concentrate on them. Now let’s go around the circle and take turns just thanking God for all that He’s done in our lives.

Pray with your students.

Wrap-up:
You know, sometimes it’s a little difficult to recognize all that God’s done for us. But when we do just take some time to realize that everything we are, everything that we’re blessed with, everything we’ve ever done right, all of these things have been made possible by God. Listen to what it says in 1 Thessalonians 5: “Be joyful always; pray continually; give thinks in all circumstances, for this is God’s will for you in Christ Jesus.” Just like David, we are supposed to remember all the great things that God has done. And just like John Nash gave his wife all the credit, we must in the same way, give God all the credit. He is the reason we are alive and breathing. He is the reason that we can enjoy this life. He is the reason that we are able to go to Heaven. He is all of our reasons. So students, we must be thankful. We must remember all He’s done for us. This week, remember what He’s done, and continue to thank Him, even after we leave this place today.