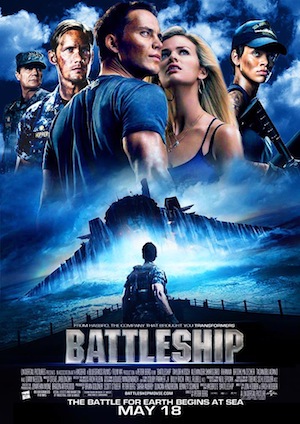 Main Point: Most people think that asking for help shows weakness, but that’s not true. It shows wisdom, plus it unleashes the team that God has placed around you.

The Movie Clip: Getting Help
Battleship is Independence Day at sea. Aliens have landed on our planet and it’s up to the US Navy to take them out before they take out Earth. This sci-fi action flick stars Taylor Kitsch (Hopper), Liam Neeson (Admiral Shane), Brooklyn Decker (Sam), and Rihanna (Weps) as Navy personnel who find themselves in a fight to the death for the life of our species. (The film is rated PG-13 for intense sequences of violence, action and destruction, and for language.)

Lt. Alex Hopper is a selfish loose cannon whose hotheadedness often gets him in trouble. Throughout the movie, he lands in one predicament after another because he lacks humility and wisdom, just like in the clip below.

Introducing the Clip:
Lt. Hopper is a bit of an ego-maniac. He thinks he’s the best and unstoppable, and he’s selfish to boot. Although this clip from the movie Battleship takes place just 9 minutes into the film, we already have seen proof that Lt. Hopper, played by Taylor Kitsch lacks the ability to make sound judgments. What you’re about to see is a soccer game between a team from the US Navy and the Japanese Navy. Several countries have come together to compete in naval warfare games, but not all of them take place on the water. This one takes place on a soccer field.

(This is a slightly longer scene, with an emphasis on action, so a synopsis will be given along with key dialogue.)

Announcers tell us that Rimpac 2012 is underway, which is a joint effort by several nations to put their navies together to learn from one another. Of course, there will definitely be some friendly competition, like the annual soccer tournament that features the US and Japan in the finals.

We’re told that the US is down 2-0 with only a few minutes left to play. There are some hard hits given and taken on both sides, and then, miraculously, Lt. Hopper scores a goal! The score is now 2-1, with the US still losing.

Lt. Hopper’s older brother Stone, the team’s goalie, passes the ball to him downfield and he goes in for the score. But just as he’s about to kick it in, Lt. Hopper gets kicked in the face (on purpose) by one of the Japanese players.

Alex: What do you mean Ronson? No. Negative.

Alex: Ronson, you move one more step, you’re dead. Do you want to die today? Do you wanna die? Good choice.

Stone: You just threatened one of my sailors.

Alex: I’ll take it.
Alex then lines up the shot after some banter with the Japanese player that kicked him. When the whistle blows, Alex moves in for the kick, and blows it way over the net.

Transitional Statement:
I know it’s Hollywood, but that kick looked vicious. There’s no way that a player would feel up to taking a penalty kick after such a hard, flagrant shot to the face that Lt. Alex Hopper sustained in that clip. In a normal world, another player would have come in to take the penalty kick. That’s what Hopper’s older brother tried to do, but the younger, foolish, prideful brother would not have it any other way. Instead of asking for help, he blew his team’s chance at victory. I guess Hopper believed the lie that most of us believe which is that “asking for help shows weakness.” That’s simply not true. Asking for help when we need it shows wisdom, plus it unleashes the team that God has placed around us. Let’s take a look at a passage from the Bible and learn from it so we don’t repeat the mistake that Alex Hopper made in this clip.

CONTEXT: This story takes place during the Conquest, the part of the Bible where God’s people were taking possession of the Promised Land. The really interesting part of this story is that the Gibeonites (also known as the Hivites) had tricked Joshua into signing a peace treaty with them before this story below takes place.

Now Adoni-Zedek king of Jerusalem heard that Joshua had taken Ai and totally destroyed it, doing to Ai and its king as he had done to Jericho and its king, and that the people of Gibeon had made a treaty of peace with Israel and were living near them. 2 He and his people were very much alarmed at this, because Gibeon was an important city, like one of the royal cities; it was larger than Ai, and all its men were good fighters. 3 So Adoni-Zedek king of Jerusalem appealed to Hoham king of Hebron, Piram king of Jarmuth, Japhia king of Lachish and Debir king of Eglon. 4 “Come up and help me attack Gibeon,” he said, “because it has made peace with Joshua and the Israelites.” 5 Then the five kings of the Amorites– the kings of Jerusalem, Hebron, Jarmuth, Lachish and Eglon– joined forces. They moved up with all their troops and took up positions against Gibeon and attacked it. 6 The Gibeonites then sent word to Joshua in the camp at Gilgal: “Do not abandon your servants. Come up to us quickly and save us! Help us, because all the Amorite kings from the hill country have joined forces against us.” 7 So Joshua marched up from Gilgal with his entire army, including all the best fighting men. 8 The LORD said to Joshua, “Do not be afraid of them; I have given them into your hand. Not one of them will be able to withstand you.” 9 After an all-night march from Gilgal, Joshua took them by surprise. 10 The LORD threw them into confusion before Israel, who defeated them in a great victory at Gibeon. Israel pursued them along the road going up to Beth Horon and cut them down all the way to Azekah and Makkedah. 11 As they fled before Israel on the road down from Beth Horon to Azekah, the LORD hurled large hailstones down on them from the sky, and more of them died from the hailstones than were killed by the swords of the Israelites. 12 On the day the LORD gave the Amorites over to Israel, Joshua said to the LORD in the presence of Israel: “O sun, stand still over Gibeon, O moon, over the Valley of Aijalon.” 13 So the sun stood still, and the moon stopped, till the nation avenged itself on its enemies, as it is written in the Book of Jashar. The sun stopped in the middle of the sky and delayed going down about a full day. 14 There has never been a day like it before or since, a day when the LORD listened to a man. Surely the LORD was fighting for Israel! 15 Then Joshua returned with all Israel to the camp at Gilgal.


Wrap Up:
During our time together, we got a chance to watch a clip from a movie where a guy had the opportunity to ask for help, but didn’t, and lost in a big way. We also read a passage from the Bible where a group of people asked for help from God’s people, and they were saved.

That’s a pretty good summation, right there, of why we should ask for help.

But asking for help is something that many of us have trouble doing. In America, we have plenty of fictional characters that don’t seem to need any help and our tendency is to idolize them. The only problem is, we were never supposed to live and function alone.

If you go all the way back to the beginning of the Bible, here is what we hear God say during Creation:

Even though God made Adam in HIS image, when God looked at Adam, He knew that Adam needed a helper. So, God gave Adam a woman that would eventually be named Eve.

Sadly, many of us will never ask for it though. We’re secretly afraid that if we ask for help, others will think we are weak or needy. So, we will try to tackle the obstacles and enemies in life all alone. More often than not, we will fail. And that failure is filled with consequences.

But that doesn’t have to be the case. We should – and must! – ask for help. We should begin by asking God for help, but we should also turn to our parents and trusted friends. There is no good reason to try and do life all alone.

God has put us together with others. We might as well use their strengths in our time of need. As I close in prayer, I’m going to ask God to show us who can help us with what we’re facing in life, and that He will also give use the courage to ask for help.