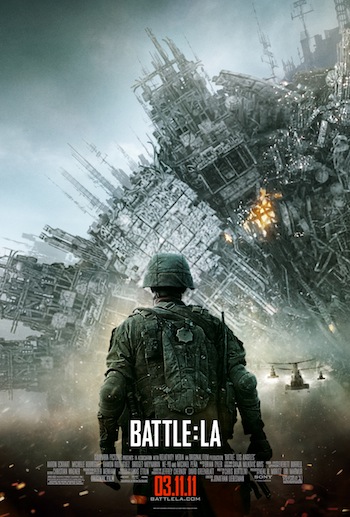 (Sony, 2011)
Main Point: As Christians, our mission is to tell the world about the love of Jesus. That mission must be accomplished…no matter what!

The Movie Clip: Going Back In
Battle, Los Angeles is a movie on par with Independence Day; it pits American military personnel in a fight against aliens…with survival on the line. Earth is under attack, with all major cities around the world being targeted first. Los Angeles is a prime target for the alien invaders so a massive battle is launched on the beach.

One tiny group of Marines stands between the aliens and a terrified population. Their mission is to evacuate as many civilians as possible and find out anything they can about the aliens. Led by a fearless First Sgt., the Marines do the best they can against a superior enemy.

Los Angeles – and Earth – is in for the fight of its life.

Introducing the Clip:
I want to show you a scene from the movie Battle Los Angeles. Yes, it’s an “alien invasion” movie, but it contains a powerful scene of one man doing what he does best: accomplish his mission no matter what. In this scene, the heroic First Sgt. has finally gotten stranded civilians onto a helicopter that will evacuate them to a safe place. You see, for several hours, they’ve been terrorized and hunted by aliens. Some of the Marines, as well as the civilians, have died. But on the helicopter ride to safety, something happens that causes First Sgt. to change direction. Let’s take a look.

NOTE: There are a few swear words in this scene. (It’s a military-themed movie.) You’ll have to make the final call as to whether or not it’s appropriate for your group.

As the helicopter lands and the Humvees pull into the extraction point, the Marines ask one another if everyone is OK. After some verbal yeses, First Sgt. says, “Let’s get us home.” The Marines then quickly escort the civilians toward the awaiting helicopter. Upon arrival at the helicopter, the pilot informs First Sgt. that the fight is going in favor of the aliens and that Los Angeles is being abandoned.

Everyone boards the helicopter and it takes flight. Stirring scenes of a burning city are shown on the horizon. It’s a grim moment for humans, and then, the helicopter begins to violently shake. Everyone is jostled around inside the cockpit of the aircraft.

Realizing that a radio frequency from the alien command center might be responsible for the helicopter’s turbulence, First Sgt. takes note of a dark spot in the center of a lit area. He asks a fellow Marine if that could be the case. She confirms his suspicions, so he tells the helicopter’s crew chief to drop him into the area so he can re-con it.

The crew chief looks at First Sgt. like he’s crazy. All the Marines do, as well. They try to talk him out of going RIGHT BACK IN to the trouble they just left, but First Sgt. knows that it’s his duty.

The crew of the chopper tells First Sgt. they cannot land, so he decides to repel out of the helicopter. On the ground, he takes stock of the situation, and as he does so, other ropes hit the ground around him, followed by the boots of Marines.

First Sgt.’s Marines left the safety of the chopper headed for home so they could be with their leader.

Transitional Statement:
If you can put yourself in that situation and be honest for a moment, I’d like to ask you a simple question: Would you go back in? Would you get off the helicopter bound for safety and go back to a fight that might take your life? In short, would you abandon everything to complete the mission? As Christians, we have a mission to accomplish. That mission is to tell the world about the love of Jesus. Here is my simple, but profound, question for each of you: Are you willing to do whatever it takes to complete that mission?


Read the following passage (back to back):

Note: According to Matthew’s Gospel, these are the last words of Jesus before He ascended into Heaven. That makes them pretty important!

Matthew 28:18-20 (NIV)
Then Jesus came to them and said, “All authority in heaven and on earth has been given to me. 19 Therefore go and make disciples of all nations, baptizing them in the name of the Father and of the Son and of the Holy Spirit, 20 and teaching them to obey everything I have commanded you. And surely I am with you always, to the very end of the age.”

Read the following passage (back to back):

NOTE: You will need to explain this passage’s context. Peter and John, by the power of God, have just healed a lame beggar outside the Temple courts. As you can imagine, that has caused quite a stir! Everyone is talking about what just happened. Of course, not everyone is happy about the miracle. Those who just killed Jesus weeks earlier try to do everything in their power to shut up the followers of Jesus.

Acts 4:1-20 (NIV)
The priests and the captain of the temple guard and the Sadducees came up to Peter and John while they were speaking to the people. 2 They were greatly disturbed because the apostles were teaching the people and proclaiming in Jesus the resurrection of the dead. 3 They seized Peter and John, and because it was evening, they put them in jail until the next day. 4 But many who heard the message believed, and the number of men grew to about five thousand. 5 The next day the rulers, elders and teachers of the law met in Jerusalem. 6 Annas the high priest was there, and so were Caiaphas, John, Alexander and the other men of the high priest’s family. 7 They had Peter and John brought before them and began to question them: “By what power or what name did you do this?” 8 Then Peter, filled with the Holy Spirit, said to them: “Rulers and elders of the people! 9 If we are being called to account today for an act of kindness shown to a cripple and are asked how he was healed, 10 then know this, you and all the people of Israel: It is by the name of Jesus Christ of Nazareth, whom you crucified but whom God raised from the dead, that this man stands before you healed. 11 He is “‘the stone you builders rejected, which has become the capstone.’ 12 Salvation is found in no one else, for there is no other name under heaven given to men by which we must be saved.” 13 When they saw the courage of Peter and John and realized that they were unschooled, ordinary men, they were astonished and they took note that these men had been with Jesus. 14 But since they could see the man who had been healed standing there with them, there was nothing they could say. 15 So they ordered them to withdraw from the Sanhedrin and then conferred together. 16 “What are we going to do with these men?” they asked. “Everybody living in Jerusalem knows they have done an outstanding miracle, and we cannot deny it. 17 But to stop this thing from spreading any further among the people, we must warn these men to speak no longer to anyone in this name.” 18 Then they called them in again and commanded them not to speak or teach at all in the name of Jesus. 19 But Peter and John replied, “Judge for yourselves whether it is right in God’s sight to obey you rather than God. 20 For we cannot help speaking about what we have seen and heard.”


Wrap Up:
In case you missed it, we have a mission that’s been given to us by God! That mission is to tell the whole world about the love of His Son Jesus. If we do, others will gain eternal life. If we don’t, others will never hear of God’s love, and they will be separated from Him forever.

In short, our mission is an important one.

Peter and John (and hundreds of thousands of other believers) did the same thing. They didn’t let fear hold them back. They didn’t back away from the task God gave them when they were thrown in jail and threatened with death. They lived every single day of their lives “on mission” teaching the world about Jesus’ love.

Let’s close with this remarkable point. Did you notice that when First Sgt. jumped down out of the helicopter that all of his Marines followed him down? In other words, they weren’t about to let him go out by himself! They were ready to accomplish the mission…even if it cost them their lives.

Let’s spend the last few minutes of our time together in prayer. Can we just circle up in small groups of 3 or 4 and pray for each other’s courage? Can we pray that we’ll take Jesus’ mission seriously? Can we ask God to help us be willing to take any risk for the mission’s sake? Go ahead and get in groups and we’ll pray about that for a few moments.

Give them time to pray. After they’ve had a few minutes to pray, invite them to hang around if they need further encouragement or direction, and the close in prayer.