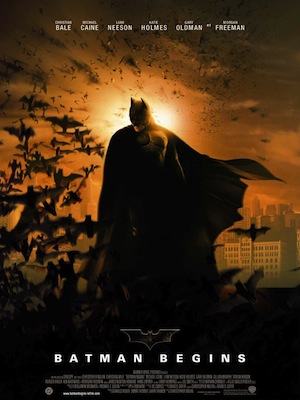 Main Point of Discussion: Regardless of who we are inside, our actions matter.

The Movie Clip: “It's what you do that defines you.”

Batman Begins is a great movie with several clips that provoke discussion. The film is exactly what the title implies: the beginning of Batman. It has enjoyable action, great performances, and a solid script with the theme of “the development of one's character” intertwined throughout the plot.

The clip we are using for this particular discussion features Bruce Wayne (before he takes on the persona of Batman) in a hotel that he has just bought. He is rude and arrogant, living it up in his affluence. However, he runs into a friend from his past who calls him out for his lack of character. It's a pivotal moment in the movie.

Introducing the Clip:
Today I want to show you a clip from the movie Batman Begins. Many of you have already seen this movie, but for those who haven’t, this scene begins with Bruce Wayne and his lady friends exiting a large hotel restaurant after making a huge scene and swimming in the decorative indoor pond. Bruce is rich and arrogant, or so it seems, and he writes a check for the price of the hotel in order to not get kicked out of the hotel’s restaurant. On his way out he runs into Rachel, his childhood friend who has some interesting things to say about his actions. Let’s take a look at this scene.

Rachel: I’d heard you were back. What are you doing?

Bruce: Just swimming. Wow, it is good to see you.

Rachel: You were gone a long time.

Bruce: I know. How are things?

Rachel: The same. Job’s getting worse.

Bruce: Can’t change the world on your own.

Rachel: What choice do I have, when you’re too busy swimming?

(Bruce’s lady companions yell for him from his car parked just out front of the hotel—“Bruce, we have some more hotels for you to buy.”)

Rachel: Bruce, deep down you may still be that same great kid you used to be. But it’s not who you are underneath… it’s what you do that defines you.

(Rachel walks away and Bruce stares off.)END CLIP AT 1 hour 11 minutes and 22 seconds.

Transitional Statement:
In this scene it is obvious that Bruce is embarrassed by his actions when he sees his good friend Rachel. He tries to explain himself, but it's too late. There would be no sweet talking out of this one. His actions had been noted.

James 2:14-17 (NLT)
[14] Dear brothers and sisters, what's the use of saying you have faith if you don't prove it by your actions? That kind of faith can't save anyone. [15] Suppose you see a brother or sister who needs food or clothing, [16] and you say, “Well, good-bye and God bless you; stay warm and eat well”—but then you don't give that person any food or clothing. What good does that do?
[17] So you see, it isn't enough just to have faith. Faith that doesn't show itself by good deeds is no faith at all—it is dead and useless.

Wrap Up:
Tonight we’ve been considering the statement “it’s what we do that defines us.” For some of us, that’s really scary. Many of us have identified actions in our lives that don’t belong there. They are actions that “define” a person we don’t want to be. But that doesn’t have to be a permanent situation. We can change that right now. As believers in Christ we have an opportunity to reflect Christ with our actions. Matthew 5:16 reads, “In the same way, let your good deeds shine out for all to see, so that everyone will praise your heavenly Father.”(NLT) We have an opportunity to give others a glimpse of Christ through us-through our actions and good deeds.

Let’s bow our heads so we can think about ourselves and not those around us. As you sit there with your eyes closed and your head bowed, I want you to think about what others see when they look at your actions. And for some of us, what if people saw some of the actions that we keep hidden? What would they think then? Our actions matter. And many of us have actions in our lives that we need to change-and now is the time. It is time to make our actions match our words.