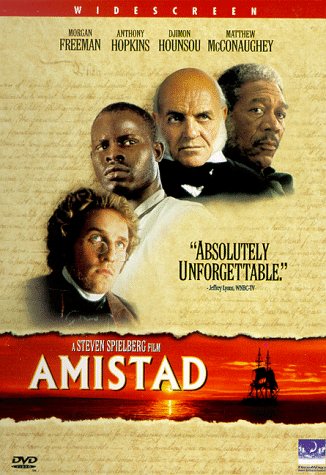 (Dreamworks, 1997)
Main Point: Is the life of Jesus just a good story, or something more?

The Movie Clip: “This is just a story.”

In today's polytheistic society it's hard to find good movie clips that portray the truth – especially about Jesus. Most movies and commercials portray a very old or very stupid, uncaring God. Only a handful of movies actually tell the Gospel Message or portray Jesus in a positive light. Steven Spielberg's 1997 film, Amistad, is one of those movies.

The Amistad was the name of a slave ship traveling from Cuba to the U.S. in 1839, which was filled with a cargo of Africans who have been sold into slavery. Even though they are chained in the cargo hold of the ship en route to America, one of the African tribal leaders named Cinque, escapes and leads a mutiny as he takes over the ship.

They continue to sail onward, hoping to find help when they land, but when they reach America, they’re imprisoned as runaway slaves. They don't speak a word of English, and it seems like they are doomed to die for killing their captors on the ship. Eventually, an abolitionist lawyer decides to take their case, and the movie follows the heart-wrenching trial that ensues.

The Clip:
The video can be found online at the following link: https://youtu.be/XLhFeELnGZE

Introducing the Clip:
The Amistad was a slave ship used to transport slaves across the Atlantic in the heyday of slavery. On one fateful voyage, the slaves revolted against their captors and actually took over the ship. Their hopes were to sail the ship onward to find help, but unfortunately for them, they landed in America, were arrested, and put on trial for mutiny and murder. In this scene I am going to show you, one of the African slaves standing trial for murder named Yamba is reading a Bible, obviously curious about Jesus. Let’s see what he has to say about the story of Jesus.

(Yamba, a slave, is in jail looking through a Bible, illustrated with drawings of New Testament events.)

Other Slave, Cinque (prounced Seen-kay): You don't have to pretend to be interested in that. Nobody's watching but me.

Yamba: I'm not pretending. I'm beginning to understand it. (Yamba shows him pictures of Christians being attacked by lions in the Roman Coliseum.) Their people have suffered more than ours . . . their lives were full of suffering. (A picture of Jesus in a manger.) Then he was born and everything changed. (The other slave points to the glow around Jesus head in a picture of Jesus riding through town on a donkey.)

Yamba: I don't know, but everywhere he goes he is followed by the sun. (Yamba turns to more pages.) Here he is healing people with his hands . . . protecting them . . . being given children.

Cinque: What's this? (pointing to a picture of Jesus walking on water)

Yamba: He could also walk across the sea. But then something happened. He was captured. Accused of some crime. Here he is with his hands tied.

Cinque: He must have done something.

Yamba: (provoked) Why? What did we do? Whatever it was, it was serious enough to kill him for it. Do you want to see how they killed him?

Cinque: This is just a story Yamba.

Yamba: (continuing to show us pages) But look. That's not the end of it. His people took his body down from this . . . thing . . . (he takes his fingers and draws a cross in the air). They took him into a cave. They wrapped him in a cloth, like we do. They thought he was dead, but he appeared before his people again . . . and spoke to them. Then finally he rose to the sky. This is where the soul goes when you die here. This is where we're going when they kill us. (He cracks a smile.) It doesn't look so bad.END CLIP AT 1 hour 39 minutes and 39 seconds (before scene change).

Transitional Statement:
Just like the slave in the movie clip who said, “This is just a story, Yamba,” there are others who think the life of Jesus was just a tale, nothing more, nothing less. After all, it has all the important qualities of a story: good guys, bad guys, conflict, betrayal, murder, and even a happy ending. But for others, it is much more. It is the hope of salvation! They believe that Jesus’ life should be the center of theirs because He loved them enough to give His life for theirs. So, is Jesus’ life a mere story for you? Or is it more?

Acts 10:36-43 (NIV)
36You know the message God sent to the people of Israel, telling the good news of peace through Jesus Christ, who is Lord of all. 37You know what has happened throughout Judea, beginning in Galilee after the baptism that John preached— 38how God anointed Jesus of Nazareth with the Holy Spirit and power, and how he went around doing good and healing all who were under the power of the devil, because God was with him.

39″We are witnesses of everything he did in the country of the Jews and in Jerusalem. They killed him by hanging him on a tree, 40but God raised him from the dead on the third day and caused him to be seen. 41He was not seen by all the people, but by witnesses whom God had already chosen—by us who ate and drank with him after he rose from the dead. 42He commanded us to preach to the people and to testify that he is the one whom God appointed as judge of the living and the dead. 43All the prophets testify about him that everyone who believes in him receives forgiveness of sins through his name.”


Wrap Up:
Tonight we watched a video clip about two slaves who were discussing Jesus’ life. One of them thought the Bible was “just a story,” but the other slave seemed to think the life of Jesus was more than just a story. Like them (And everyone else on the planet!) we also have to decide if we think there is more to Jesus’ life than just a good story. Is it a 2,000 year old fairy tale that simply isn’t true, or is it a story about a Person that can totally change our lives?

That’s the question that Josh McDowell has been asking for years. These days, Josh is a biblical scholar, but that wasn’t always the case. Before he became a Christian, he was an outspoken atheist who not only believed the story of Jesus was false, he even invested large amounts of time trying to disprove it. His intention was to write a book on all the ways the story of Jesus was a lie.

Because sitting in a library in London, England one day, doing research to try and show Jesus to be a liar, it became clear to him that the story of Jesus was not only true…it was much more than just a story! Josh saw himself in the story of Jesus. He recognized that Jesus came to Earth to give His life on the cross to pay for the sins of the world…including the sins Josh himself committed. Not long after that, Josh gave his life to Jesus, had his sins forgiven, and has traveled all over the world talking about the TRUE and LIFE-CHANGING story of Jesus Christ.

*Basically, Josh says that Jesus was one of three things. Jesus was either a liar, or a lunatic, or Lord. If Jesus made false claims about Himself and He KNEW they were wrong, then Jesus was a liar. He spent His whole life intentionally misleading people.

But Josh also says that Jesus could have been a lunatic. What if Jesus made false claims about Himself WITHOUT KNOWING the claims were false? Josh says that would make Jesus a lunatic. Jesus was no different than people who swear they’ve seen Elvis pumping gas at a 7-11.

But Josh ends with saying that Jesus just might be exactly who He says He was. And if this is true, then Jesus isn’t a liar or a lunatic at all, but Lord! He is God’s Son and everything the Bible says about Him is true. Josh has spent his life studying the story of Jesus. He has written many books…VERY LARGE ones I might add…about the life of Jesus and why he believes that Jesus is the Lord of the Universe. But beyond all of Josh’s evidence from archaeology and history and research, the main reason why Josh believes Jesus is Lord is because Josh believes Jesus loved him enough to die for him, to save him.

And now, we have to decide what we think of Jesus, too. Do you agree with the slave who says the story of Jesus was just a story, or do you think there is something to the life of Jesus? The passage we read tonight says that ALL who believe in Him have their sins forgiven. If you want to put your trust and faith in Jesus tonight, you can do so. Just come talk to one of our adult leaders before you leave.