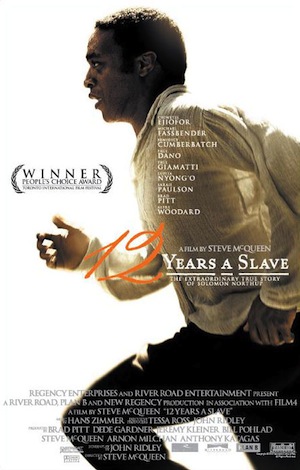 (Summit Entertainment, 2013)
Main Point: Betrayal ruins friendships because it shatters trust. If we truly love someone, friend or family member, we should never betray them in any degree.

The Movie Clip:
Based on a true story, 12 Years a Slave offered great insight into the issue of slavery by focusing on one man and his quest to be free of it. Solomon Northup, a freeman born in New York, was tricked and kidnapped by slave traders, and then smuggled into the South where he was promptly sold under the name of “Platt.”

Northup then spends the next 12 years bouncing from one slave owner to another and back and forth a few times, as well. Some owners are much more cruel than others. A well-educated man, Solomon tries to use his wits to escape the South and return home to his family who have no knowledge of his whereabouts. Time and time again, he’s defeated – and punished for his efforts – until he befriends a Canadian (played by Brad Pitt) who gives him the help he needs to escape his plight.

The film is rated R and rightly so. It shows the awful cruelty of slavery, as well as includes strong, racist language, and even a scene of rape. The clip below has no violence, but does include racist slurs.

Introducing the Clip:
12 Years a Slave was a film released in late 2013 that captured the attention of the world because it showed the capture, kidnapping, smuggling, and selling into slavery of a freeman named Solomon Northup. Based on a true story, the movie shows the struggles that Solomon, known to his slave owners as “Platt” faces as he tries to escape slavery in the South and return to his family in the North. It’s a very risky endeavor, however; runaway slaves were often beaten and/or killed. Platt thinks his luck has finally changed when a white slave named Armsby is moved into the camp to serve the cruel Mr. Epps along with them. Take a look at the plan that Platt hatches, the trust that he invests in Armsby, and how it pans out.

(The clip is over 4 minutes long, so only the key happenings and dialogue will be recorded.)

The clip opens with Pratt (whose real name is Solomon Northup) making a late night visit to a white slave named Armsby who is new to the plantation. Pratt asks him for a simple favor: deliver a letter to the post office. Armsby agrees and Northup leaves to go write the letter. However, it becomes clear that Armsby betrays him when Mr. Epps, the cruel slave owner, awakens Pratt in the middle of the night and confronts him about the letter.

NOTE: This scene contains racial slurs. View, and show, at your discretion.

Transitional Statement:
When I watched that in the movie for the first time, I was gutted. I was angry. I grew hopeless for Platt. Here was just a regular guy who was minding his own business in the North when he was kidnapped and sold into slavery in the South. All he wants to do is return home, and he thought he had a friend who could help him in Armsby. Unfortunately, that wasn’t the case. Armsby just took the money and ratted Platt out. The crook even gave Platt his word! But betrayal has been ruining relationships since way before this encounter. Let’s take a look at God’s Word to see what it has to say about betrayal and why we should avoid it at all costs.

Then one of the Twelve– the one called Judas Iscariot– went to the chief priests 15 and asked, “What are you willing to give me if I hand him over to you?” So they counted out for him thirty silver coins. 16 From then on Judas watched for an opportunity to hand him over.

Then, after the Lord’s Supper and Jesus’ prayer time in the Garden of Gethsemane…

While he was still speaking, Judas, one of the Twelve, arrived. With him was a large crowd armed with swords and clubs, sent from the chief priests and the elders of the people. 48 Now the betrayer had arranged a signal with them: “The one I kiss is the man; arrest him.” 49 Going at once to Jesus, Judas said, “Greetings, Rabbi!” and kissed him. 50 Jesus replied, “Friend, do what you came for.” Then the men stepped forward, seized Jesus and arrested him. 51 With that, one of Jesus’ companions reached for his sword, drew it out and struck the servant of the high priest, cutting off his ear. 52 “Put your sword back in its place,” Jesus said to him, “for all who draw the sword will die by the sword. 53 Do you think I cannot call on my Father, and he will at once put at my disposal more than twelve legions of angels? 54 But how then would the Scriptures be fulfilled that say it must happen in this way?” 55 At that time Jesus said to the crowd, “Am I leading a rebellion, that you have come out with swords and clubs to capture me? Every day I sat in the temple courts teaching, and you did not arrest me. 56 But this has all taken place that the writings of the prophets might be fulfilled.” Then all the disciples deserted him and fled.

There have been some high profile acts of betrayal across history. Obviously, the betrayal of Jesus is at the top of the list, but all of us have heard about the betrayal of Benedict Arnold during the Revolutionary War, too. His actions jeopardized the lives of several thousand men on both sides of the battle lines. The list goes on and on when it comes to acts of betrayal. Unfortunately, so does the list of destruction, distrust, and devastation.

Here’s the really interesting thing about betrayal: it doesn’t just ruin the life of the one betrayed…it tends to ruin the life of the traitor, as well. What we didn’t study about from God’s Word was the fact that Judas went and killed himself after he betrayed Jesus. The guy from the movie, Armsby, remained a slave and a drunkard, and never recouped from his situation as a slave. If you choose to betray someone, at the very least, you will be racked with guilt.

If it’s not evident by now, betrayal should be avoided at all costs simply because of the damage that can be done. But betrayal isn’t just limited to selling someone out like we watched about in the clip or read from God’s Word. Betrayal can happen as a result of a calloused word, a jealous feeling, a cold shoulder in a time of need, and in many other settings. For you to avoid betrayal, you have to be very sensitive to your loved ones around you.

If you’ve ever betrayed someone, even in a slight way, I suggest you spend some time in prayer asking God to forgive you. I also suggest you ask God to give you the strength to go and seek the other person’s forgiveness. However, if you’ve been betrayed by someone, I also suggest you pray and ask God to give you the strength to forgive that person, or that group of people. It’s not easy, I know. But betrayal has a tendency to ruin lives. Don’t let it ruin yours when you could ask God to help put it behind you.

As always, if you need a little extra help in this department – which is a HUGE area of life – then hang around after we are finished and talk with myself or one of our adult leaders.