In the spring of 2012, I was speaking at a camp in rural Wisconsin and I brought up the subject of sex to my middle school audience of about 500 kids. Unsurprisingly, I received a handful of the typical “Why are you talking about sex with this age group?!” comments.

My answer? “Well, somebody’s got to!”

Since that camp, I’ve been amazed at how much the subject of “talking-about-sex-with-teenagers” has come up. Sadly, I’ve found that the “hush” isn’t just limited to Wisconsin. The subject of sex is one that Christian parents and youth workers don’t talk about frequently enough with our kids. So…let’s talk about “talking about it.”

Recently, Marko wrote this insightful blog about how he actually prefers to speak to middle schoolers about sex-the perfect time to talk with them about the subject. He articulated it like this: “It’s pure irresponsibility as a youth worker to avoid this subject.” He goes on to describe just how “all-over-the-board” these kids are developmentally, and how, often with middle schoolers, it’s more “what-sex-will-be” than “what-it-is” for them in their lives.

But let’s keep going. A few days later I had breakfast with my friend Doug Fields and shared what had happened at the camp in Wisconsin, specifically about the moms who had said, “These kids weren’t thinking about sex at all, but now that you brought it up, they are!” Having seen this overprotective parenting style on way too many occasions, Doug shook his head in disbelief. Forget the adults for a moment – we both felt for these poor, misinformed kids that were basically taught, “We don’t ever talk about ‘the naughty thing“. It’s something both of us observe way too often.

So, is this a national problem?

As I write this, my dad is on a mission trip to Uganda, teaching and equipping African pastors to preach God’s Word. One of the African ministers traveling with him, Andrew, is a pastor who visits different villages talking about sex and the AIDS pandemic, educating young people with the truth. Sadly, in African cultures, they rarely talk about sex. (Wow, Uganda is just like Wisconsin!) Andrew has built trust with several of the schools and has been teaching “True Love Waits” rallies, presenting the truth and then interacting with kids afterwards, answering the many questions they have.

My dad just sent me the following email from his phone while in Uganda:

Had another good night sleep. We are at a Catholic retreat center and it is pretty primitive, but the team is all so positive. We don’t have showers or hot water. Learning to wash my hair at a faucet. Cold shaves.

Our team that taught the “True Love Waits” to 200 middle school kids was pretty moved yesterday. After Andrew made the AIDS presentation, they handed out cards for questions. Everyone wrote questions. Schools are in English. The questions were heart-wrenching. Things like, “I’ve been raped. How do I know if I have AIDS?” Or “I have AIDS. Should I quit having sex with my boyfriend?” This from 12 and 13 year olds!

The headmaster of the school invited them back today to talk to another 200 kids. The team is very excited to present this material that Andrew has written. He was on a Ministry of Education committee when he wrote this, and now he can present this in public schools.

The African AIDS epidemic is pretty scary. Those of us in the US would like to think that we have an entire ocean separating us from this problem, but sadly, this isn’t just an African problem. Remember, it was only a few years ago that we all woke up to the headlines, “One-in-Four Teenage Girls Has a Sexually Transmitted Disease.”

It’s apparent that young girls in the US are making the exact same mistakes.

But part of the problem is ignorance. Last month USNews wrote about a study revealing that one-in-four teenage girls who took the human papillomavirus (HPV) vaccine mistakenly thought their risk of getting other STDs was lowered. Sound crazy? I constantly encounter this kind of reasoning in my work with middle school students on campuses. “I’ll just wear two condoms.” “I always shower really good after sex.”

The fact is, parents aren’t talking about sex frequently enough with their kids. One “sex talk” isn’t enough. This needs to be an ongoing conversation!

I talk about sex to young people frequently, openly, honestly…but never gratuitously. TV and movies talk about sex all the time; they just don’t tell the whole story. We shouldn’t be afraid to talk candidly about the subject, sharing the truth on the matter. Sex isn’t bad; sex isn’t naughty…it’s an amazing gift that God gives to a man and woman in marriage. The Bible isn’t afraid to talk about it in lurid detail, thus, we shouldn’t be afraid to, either.

So, why is it that the church always squirms when we talk about sex? We’re so afraid of being “inappropriate” that we avoid talking about the elephant in the room. Meanwhile, Hollywood isn’t holding anything back while slinging lies. 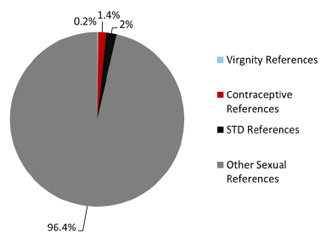 Recently I read a study that tracked all the sexual dialogue within current MTV reality shows like Jersey Shore, and the various Real Word episodes. (Side note: Jersey Shore was the #3 most-watched show on cable television last week. Unfortunately, this sexually-charged show is very often the most-watched cable show on any given week.) This sobering report revealed that in all the talk about intercourse, foreplay, oral sex, and masturbation on these MTV shows…a whopping 96.4% of the dialogue didn’t mention responsibility or consequences of any kind. Only 3.6% of the time did they ever talk about any sexual responsibility like virginity (.2%), contraceptives (1.4%), or consequences like STDs (2%).

By the way, today’s music isn’t much better at presenting truth, either.

So, do you now see why I address sexuality when I speak? The lies about sex are obviously getting plenty of airtime. Everywhere I turn, I see the messages – and repercussions – of an ultra-sexualized society. When will our kids hear the truth? Who else is going to tell them?

Parents… are you listening?

If you liked Jonathan’s candid approach to this subject, you’ll really enjoy his books like, Candid Confessions of an Imperfect Parent, and Connect: Real Relationships in a World of Isolation. Right now you can get FREE U.S. shipping on these books and others on Jonathan’s Recommended Books page.