Here are five Biblical facts that you can share with someone about a relationship with God. Each fact has a corresponding verse from the Bible to support it, a drawn "cliff-illustration", and a "Highlight." These "Highlights" are points that you should stress when sharing with someone.

God loves you and created you to have a personal relationship with Him.

Colossians 1:16b All things were created by Him and for Him.

HIGHLIGHT
Unlike some may think, God isn’t just some old prune with a long white beard that is waiting to bonk us over the head with a Bible every time we step out of line. He loves us and created us with the intention of having a personal relationship with Him.

Our sin (sin = me running things my way, not God’s way) keeps us from having a personal relationship with God.

Romans 3:23 For all have sinned and fall short of the glory of God.

Optional Story:
Let’s say you owned a nice little sports car convertible. One day you’re driving along the road and you see a dirt trail going over some hills and down into a giant mud bowl. You think 4-wheeling sounds fun so you down shift and hit the dirt trail in your little car. Well before you know it, you slam the frame of your car in various dips in the trail, hit some rocks, throwing out your alignment, slide into the side of a tree- and if you’re lucky, barely get out of there with your damaged car.

You know, your car wasn’t designed for 4-wheeling. It was designed for you to have fun with friends on a paved road. That’s the way it is with us. People have chosen to live the way they want to live, regardless of the way they were designed to live. Because of this, people have separated themselves from God.

Only through Jesus Christ can you have a personal relationship with God.

John 14:6 Jesus answered, "I am the way and the truth and the life. No one comes to the Father except through me."

A Must-tell Story:
Let’s say one day you go driving in your new convertible, red Camaro. You get on the freeway and step on it. Before you know it you are doing 110 miles an hour. Your moment of fun is disturbed by the sound of a siren. You look in your rear view mirror to see red and blue flashing lights: you’re getting pulled over by a police officer. The police officer informs you that since you were going over 100 miles an hour- you need to go with him. So you are hand cuffed, and driven to court.

When it is your turn, the judge looks at the record and says, "you were going over 100 miles per hour. Do you know what the punishment for that is? Its either $1000 or six months in jail." Then the judge looks you in the eyes. "Do you have $1000?" You search your pockets only to find seven dollars and 33 cents. The judge pronounces you guilty and slams his gavel down.

Then something interesting happens. The judge takes off his robe and comes down from his stand. He walks over to you and looks into your eyes again with compassion. He says "I had to do that as your judge. But I don’t want you to have to go to jail. So now I will go to jail and take your punishment for you as your savior."

Jesus came down from his position as judge to be our savior. He paid the price for our sins by dying on the cross. Every sin you ever committed and will commit was paid for on the cross. He rose again that we may live in a relationship with him forever. All you have to do is respond- which brings us to our fourth fact.

You must personally respond by trusting Jesus Christ as Savior and Lord.

John 3:16 For God so loved the world that He gave His one and only Son, that whoever believes in Him shall not perish but have eternal life.

HIGHLIGHT
All these facts mean nothing without number four. Sure, it’s cool that God created us for a relationship with him. Sure, man separated himself from God by sinning. And it’s cool that Jesus paid that price for me . . . but so what. That all means nothing if I do nothing about it. Here the Bible says that if we believe in him we won’t perish. I don’t know about you- but I want to know what believe means here in this verse; because, if I do believe- I won’t perish. If I do trust in him I can have a relationship with him. Believe is illustrated well in this story . . .

There was a great tightrope walker known as The Great Blondin. In the late 1890’s he strung a tightrope across Niagara falls, and then before ten thousand screaming people, inched his way from the Canadian side of the falls to the U.S. side. When he got there, the crowd began shouting his name, "Blondin! Blondin! Blondin!" Finally he raised his arms, quieted the crowd and shouted this to them, "I am Blondin! Do you believe in me?" The crowd shouted back, "We believe! We believe! We believe!" Again he quieted the crowd and once more he shouted to them, "I’m going back across the tightrope but this time I’m going to carry someone on my back. Do you believe I can do that?" The crowd yelled, "We believe! We believe!" He quieted them one more time and then he said, "Who will be that person?" The crowd went dead. Nothing. Finally, out of the crowd stepped one man. He climbed on Blondin’s shoulders and for the next three and a half hours, Blondin inched his way back across the tightrope to the Canadian side of the falls.

The whole crowd said that they believed, yet only one man truly believed. True belief (or trust) in Christ is a belief of action, not a belief that just merely chants "I believe!"

Where would you place yourself in this illustration?

Here is where you get down to the nitty gritty. You have just explained the road to salvation:

Now you ask them to reveal whether or not they have a relationship with God. This is difficult for some kids because they don’t use the Biblical facts they just learned to make this judgement, they use logic or feelings to explain why they are or are not saved. So regardless of the choice they make, go back to the definitions of a relationship with God that you have just gone over (steps 1-4) and ask them if they indeed fall into that category according to those facts. For example: Tonya points to the right-hand box "I have a personal relationship with God" You simply review steps 1, 2 3, and 4 and ask "Oh, so you understood that God wanted a relationship with you, but sin was in the way. Jesus however paid the price for those sins and so you responded to him at a specific time and asked him to forgive your sins and you began to trust him to direct your life?" If she says yes, you simply reply "Oh, that’s great. When did you make that decision?" This will help you to make sure that the kid you are talking to has really made a commitment if they claim they already have. If they reveal that they don’t have a relationship, simply ask them the question "Where would you like to be?"

Praying For Salvation
If they decide that they would like a personal relationship with Jesus, then pray with them right then and there. Tell them that you will pray first, then they will. Review with them what they should pray- the main point of the steps you have just gone over:

1. I am separated from a relationship with God and nothing I do can restore that. I need Jesus. Jesus forgive me for my sins. Thank you for paying the penalty for me.
2. I can’t run my life on my own (my way). Run my life for me. I don’t want to just say I believe; I want to do it.

Pray first, thanking God for them. Then tell God thank you that the person is going to pray the following steps (repeat again what they will pray). Encourage them to pray. If you need to, help them remember. It’s best to let them pray in their own words so that they understand it.

Your trust in Jesus Christ begins a lifelong relationship.

Story:
My friend said that the best day of his life was his wedding day. His wife looked beautiful, He was all spiffed out in a tux, and all of their friends were there. So they walked down the isle, said their vows and kissed. Then they . . . they each went out a separate door and never saw each other again. No . . . that is not what happened. They left together and lived in the same house. When you have a relationship with God, you live in the same house.

FINAL IMPORTANT STEP
The person who just received Christ should receive some affirmation for his or her decision. Call or take the person to a Christian friend and have him or her tell your Christian friend what decision they just made. Hopefully, they will receive a hug and a "Welcome to the Family of God!" This will do two things: it will make them verbalize what they just did (a lot like them praying the prayer by themselves), and it will make them feel encouraged in the decision they just made. It is good to do this several times with several different Christian friends. 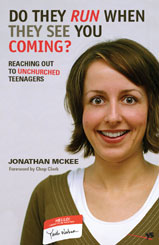 If you enjoyed this article from Jonathan McKee, you’ll love his book, Do They Run When They See You Coming? Reaching Out to Unchurched Students (Click here for that book at a discounted price)
By Jonathan McKee 0 Comments
Share