It’s Okay. Nobody Ever Comes to My Games. 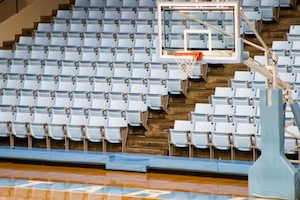 Brandon’s smile will melt you.

Beneath the tough exterior, facial piercings, big ear gages and tattoos is a little boy looking for hope and acceptance. A combination of poor choices and life circumstances have resulted in him attending a local continuation high school – an excellent one – but one with fewer opportunities than the average school.

Brandon attended our anti-bulling program, Point Break, and the subsequent weeks of follow-up. He’s latched upon every opportunity to be involved, often inviting friends and being our advocate. He’s now found a safe place at our campus ministry, people that care for him deeply, and a new network of great friends. We’re starting to get to know the kid underneath all these layers. He’s really excited about the upcoming basketball season. On Monday night he proudly showed me the picture of his uniform.

I broke the news to Brandon on Monday that I’d be unable to make his first game.  Unfazed he responded with a smile, “Its okay, nobody ever comes to my games.”  There was no malice or hidden frustration in his voice; he was simply sharing part of his story.  My heart jumped inside and I knew I HAD to be there.

I cleared my schedule and took our new intern Eddy with me to the game – there were just a few of us in the stands.

The coach emailed me this brief thank you note:

The school mascot is a “Warrior”.  war·ri·or n. Defined as

We cheered, “Go Warriors!” from the bleachers to encourage the team down the stretch.  They came from behind for a last few seconds come from behind victory – it was awesome and we were there to cheer and hug and offer high fives to the team afterwards.

Truth is, many of the kids we work with are warriors – engaged and experienced in battle.  Brandon is a teen father with a lot of pent up anger and seeking a cause. Many of Brandon’s teammates and classmates are also engaged in a battle. A battle of drugs and alcohol, a battle of acceptance on the streets, a battle for their very soul.

I’m driven by the hundreds and hundreds of kids like Brandon we work with each day. Every one with their own story, from the rough streets of our urban neighborhoods to the gated communities of our suburbs – we are reaching every kid one at a time.

I’m a renewed Warrior engaged aggressively and energetically for the only cause that really matters…will you go on your local campus and join me?

Sometimes it starts by just… showing up.

is a 20-year youth ministry veteran who has worked full time for Campus Life for the last 14 years. He serves on two campuses weekly and runs several campus ministries both on and off campus in partnerships with local churches. Rob has been interviewed several times in Jonathan's podcasts on TheSource4YM.com and Jonathan drew from his expertise throughout his book, Connect: Real Relationships in a World of Isolation. Rob serves on the national Campus Life team at Youth for Christ USA.

HOW TO GET ONTO CAMPUS

The Power of Coming Together