Voyage of the Dawn Treader, The 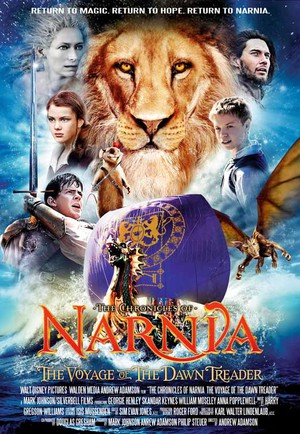 The Cronicles of Narnia: The Voyage of the Dawn Treader
(20th Century Fox, 2010)
Main Point: We need to overcome temptation because we cannot live our lives according to God’s purpose if we keep giving in to temptation.

The Movie Clip(s):
The Voyage of the Dawn Treader, the third book in The Chronicles of Narnia series, brings siblings Edmund and Lucy Pevensie, back to Narnia with their cousin Eustace. While there, they accompany Caspian, now king, on a voyage upon The Dawn Treader, to find the seven lords who were banished when Caspian’s evil uncle stole the throne.

This small group discussion requires two video clips to be played. In the first one, we see the heroic group being warned about the dangers of Dark Island by Coriakin. It is a place of unchecked evil that will test them in the most powerful ways possible…by preying on their personal weaknesses.

The second video clip shows Edmund on Deathwater Island at the magical pond that turns to gold anything and everything dipped into it. Since riches, fame, power, and honor have always been at the forefront of Edmund’s heart, it is the temptation of money that he must overcome.

Introducing the FIRST Clip:
We usually just show one clip for our small group discussions, but tonight, I want to show you two. If you’ve seen The Chronicles of Narnia: The Voyage of the Dawn Treader, you know the importance of this first scene I’m about to show you. In it, our heroic group is being warned by the mysterious Coriakin that severe temptations and horrible dangers await them on their journey, especially on Dark Island. Coriakin explains that Dark Island makes a person’s darkest dreams and greatest weaknesses come true, and that to be successful at destroying evil, they must first face the evil inside them. Let’s take a look.

Video One: The Warning About Dark Island

BEGIN CLIP AT 43 MINUTES AND 04 SECONDS

(This clip has a lot of dialogue in it, so only the key parts will be mentioned below. In this video segment, Coriakin, a power wizard, explains to the humans what their journey will be like and what treachery awaits them.)

Coriakin tells them that evil “can take any form. It can make your darkest dreams come true. It seeks to corrupt all goodness, to steal the light from this world. But beware, you are all about to be tested. Evil will do everything in its power to tempt you. Be strong. Don’t fall to temptation. To defeat the darkness out there, you must defeat the darkness inside yourselves.”END CLIP AT 45 MINUTES AND 29 SECONDS

Introducing the SECOND Clip:
As I told you, I want to show you a second clip. This second scene happens a little later in the movie, and just as Coriakin predicted, one of our heroes, Edmund, has to face his greatest weakness: the love of money. As long as we’ve known Edmund, he’s been jealous of those with greater power than himself. Whether it was with his older brother Peter or King Caspian, he’s always looked for an angle to promote himself. Let’s see what happens when he comes face to face with the possibility he’s always sought.

BEGIN CLIP AT 53 MINUTES AND 39 SECONDS

(Edmund, Lucy, and Caspian have stumbled upon a pool that turns anything that touches its waters into gold. Of course, Edmund, who’s always wanted money and power, immediately begins to think about what this find can bring him.)

Edmund: Whoever has access to this pool, could be the most powerful person in the world. Lucy, we’d be so rich, no one could tell us what to do, or who to live with.

(But Prince Caspian says that Edmund cannot have the treasures. He tells the greedy Edmund that he cannot take anything with him when he leaves Narnia. Of course, this leads to a confrontation between the two.)

Edmund: (Yelling at Prince Caspian) I deserve a kingdom of my own! I deserve to rule! (They start to fight, but Lucy jumps between them.)

Lucy: Stop it! Both of you! Look at yourselves. Can’t you see what’s happening? This place has tempted you. It’s bewitching you. This is exactly what Coriakin was talking about. Let’s just get out of here.END CLIP AT 58 MINUTES AND 03 SECONDS

Transition Statement:
If these two clips made anything crystal clear it’s this: temptation will come our way, and it will target our weaknesses, and it wants to destroy us. If we want to accomplish the mission God gave us in life, we must overcome temptation. It’s not easy, but it’s worth it. There’s a great example of overcoming temptation in the Bible, and I want us all to take a look at it now to see what we can learn from it.

Matthew 4:1-11 (NIV)
1 Then Jesus was led by the Spirit into the desert to be tempted by the devil. 2 After fasting forty days and forty nights, he was hungry. 3 The tempter came to him and said, “If you are the Son of God, tell these stones to become bread.”
4 Jesus answered, “It is written: ‘Man does not live on bread alone, but on every word that comes from the mouth of God.’”
5 Then the devil took him to the holy city and had him stand on the highest point of the temple. 6 “If you are the Son of God,” he said, “throw yourself down. For it is written:


“‘He will command his angels concerning you,
and they will lift you up in their hands,
so that you will not strike your foot against a stone.’”

7 Jesus answered him, “It is also written: ‘Do not put the Lord your God to the test.’”
8 Again, the devil took him to a very high mountain and showed him all the kingdoms of the world and their splendor. 9 “All this I will give you,” he said, “if you will bow down and worship me.”
10 Jesus said to him, “Away from me, Satan! For it is written: ‘Worship the Lord your God, and serve him only.’”
11 Then the devil left him, and angels came and attended him.

Wrap Up:
Tonight we saw an example of extreme temptation when Edmund had to face his greatest weakness. He was told that it would happen, but when he faced the possibility of untold riches and wealth, he still failed greatly. Unfortunately, the same is true for us too often.

Our weakness may not be gold, but we still have weaknesses, and our enemy the devil tries to use them against us. The devil hates us and would like nothing more than to keep us from loving God. So he uses temptations like the one Edmund faced to make us love ourselves more than God.

But when we give in to temptation, we basically tell God that what we want is more important that what He wants. We basically tell Him that we’d rather live for ourselves than for Him. And when that happens, we cannot accomplish the purpose He has given our lives.

The good news is, we don’t have to give in to temptation. In fact, Jesus has provided us with an awesome strategy for overcoming the devil’s temptations. What we read tonight was that Jesus knew the Word of God like the back of His hand. So, when the devil tried to trip Him up with lies, Jesus quoted God’s Word to Satan.

Secondly, we saw that Jesus placed a HUGE amount of importance on the purpose God had given His life. There was no way Jesus was going to let the devil lead Him away from God’s plan.

We need to do both of these, as well. We must be familiar enough with God’s Word that when the devil tempts us, we can recognize his lies. That’s the only way we can live our lives according to God’s truth. Further, we must make sure that our sole purpose on Planet Earth is to please God. If we do that, we won’t want to give in to temptation.

Listen, temptation is no small matter, especially when it involves our greatest weaknesses. You don’t have to face those temptations alone. You can have God’s help and ours. If you want to talk to someone before you leave tonight, just grab one of our adult leaders. We’d LOVE to tell you more about facing temptation.