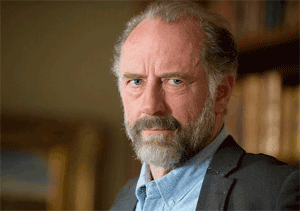 It is hard to believe that cowards can still be leaders at this point in the show. So far, most of the characters like Gregory died within the first year of the apocalypse.

Sasha saw it clearly when she said, “He’s an idiot.” But Maggie saw it clearer when she replied, “He’s a coward. They’re more dangerous.”

But somehow, in the unique safety his walls have provided, he is alive and is the leader of hilltop (for now). When walkers come, he lets others do the dirty work of killing them. I imagine that he spends most of his time sipping his precious single malt scotch on the porch of their plantation home while others work (not unlike the slave owners who most likely built the home).

Gregory is a sniveling little weasel who has no business being the leader of hilltop. But tonight we realize that one of the reasons that he is in this position is because of Jesus (not the real Jesus, but the intriguing character played by Tom Payne). Jesus is clearly the secret behind Hilltop’s success, but he doesn’t want to commit to being the leader. So Gregory gets to be the ‘de facto’ leader. On The Talking Dead this week independent film director Kevin Smith proposed that the two might even be related.

So when Negan’s men send a locked armored amc gremlin (almost as cool as Garth’s AMC Pacer in Wayne’s World) blasting music in their compound in the middle of the night, it isn’t Gregory that takes care of business. It is Sasha, Jesus and even pregnant Maggie who deal with the situation. Gregory simply steps away from the window and slips back into the darkness (great shot, by the way).

Maggie demonstrates to everyone that she has what it takes to be in charge. She is not a coward and she is willing to do what needs to be done to save lives. This time, it meant driving a tractor over walkers and the gremlin. She points out that she had done the same thing to an ex boyfriends camaro in high school. Clearly she is not a woman to be messed with.

Probably the biggest moment that demonstrated Gregory’s cowardice and failed leadership was when he almost gave up Maggie and Sasha to Negan’s men. He told Jesus to hide them in the closet, but not long after Negan’s men arrive, Gregory proceeds to show them what is in the closet. Fortunately, Jesus knew Gregory’s cowardly ways and hid them elsewhere. In addition, he hid a case of Gregory’s precious scotch in there instead. But when they confiscate the scotch, Gregory is too stupid to realize that Jesus saved his life. When Negan’s men leave the house, Jesus and Gregory get into it.

Gregory: I told you to hide them in the hallway closet

Jesus: No, you said “closet”

Gregory: This is my bedroom. What if they came in here before I…

Sasha: Before you tried to give us up?

Maggie: They would have killed you first.

Gregory: Why are you even defending her. We are here right now because she and Rich didn’t handle things like they said they would.

Jesus: The saviors tried to kill you.

Gregory: That was a misunderstanding, and as soon as the saviors leave – we get them the hell out of here before something bad really happens.

Gregory: So you’re gonna be in charge now?

Jesus: No. It’s just that you won’t be. Maggie and Sasha are staying. I’m staying. We are all going to be one big happy dysfunctional family.

Most of us are probably already guessing Maggie will now take control of Hilltop community, and maybe Jesus is going to take a more active role in the leadership there. But I’m sure we haven’t seen the last of Gregory’s stupidity.

As I was watching this, I couldn’t help but think of one of my favorite bible stories from the Old Testament where two people are hidden from enemies who would have killed them. The story takes place in Joshua chapter two, but the results of the story echo throughout the Old Testament and even parts of the New Testament. The story takes place when Joshua is in charge of Israel and they are about to take over the city of Jericho. The Canaanites in Jericho have been terrorizing Israel for generations and Israel has been frozen in fear.

Then Joshua secretly sent out two spies from the Israelite camp at Acacia Grove. He instructed them, “Scout out the land on the other side of the Jordan River, especially around Jericho.” So the two men set out and came to the house of a prostitute named Rahab and stayed there that night.

4 Rahab had hidden the two men, but she replied, “Yes, the men were here earlier, but I didn’t know where they were from. 5 They left the town at dusk, as the gates were about to close. I don’t know where they went. If you hurry, you can probably catch up with them.” 6 (Actually, she had taken them up to the roof and hidden them beneath bundles of flax she had laid out.) 7 So the king’s men went looking for the spies along the road leading to the shallow crossings of the Jordan River. And as soon as the king’s men had left, the gate of Jericho was shut. (Joshua 2:1-7, NLT)

Rahab is an unlikely hero in this story. A female hero, no doubt, back when females were never heros.

Rahab is a prostitute who lives in the walls of the city of Jericho. She has no reason to help these Israelite spies other than the fact that she realizes that maybe their God is real. She presumably has been party to the wicked ways of the Canaanite human sacrificial system in honor of their false Gods (mostly children were sacrificed). But as Hebrews 11:31 tells us “It was by faith that Rahab the prostitute was not destroyed with the people in her city who refused to obey God. For she had given a friendly welcome to the spies.”

What was it about Rahab? She certainly wasn’t a coward. She definitely was very brave and was willing to take a pretty big gamble with her own life. But what the author of Hebrews says, is that it was her faith that caused her to make a decision that must have seemed crazy at the time.

The quality Rahab had was a perspective that went way beyond her current situation. That is essentially what faith is. It sees that there is more to this life than the bully that is right in front of us. Faith sees that God is in control no matter what the circumstances. Consequently, Rahab will always be remembered for doing the brave thing and taking part in saving Israel.

But her story didn’t end in Jericho. She would become and Israelite and would marry into the tribe. Ultimately, if you look at the genealogies at the beginning of the book of Matthew, you see that she would be one of the people in the line of Abraham, David and eventually Jesus. Her faith actually made her a part of the fulfillment of the promise to Abraham and a relative of Jesus, who would literally save the world.

1) Why do you think that Gregory gets everyone’s name wrong? Does this say something about his character?

2) Carl thinks that his dad’s approach to Negan is wrong and is acting in defiance of his father. Do you think that Carl is being wise by going after Negan? Why or why not?

3) When Maggie crushes the Gremlin with the tractor, she shows tremendous leadership. She is definitely a “go getter” like the title of the episode. How does this contrast with Gregory’s leadership?

4) Why does Gregory lead Negan’s guys to the closet?

5) What do you think would have happened if Maggie and Sasha had been caught in the closet?

6) What would have a good leader done in Gregory’s situation?

7) Last week we talked about character. This is a topic we could probably talk about every week, but this week character is front and center. What did we learn about the character of the various people on the show? Gregory? Maggie? Sasha? Jesus? Carl?

8) In your life, how do you usually respond when you are afraid? Is there any character on the show that you relate to this way?

9) How would knowing that God is in control change how you react in traumatic situations?